From a July 3, 2008 speech Barack Obama called the $4 trillion in debt that we incurred under the Bush administration and the $5 trillion from the first 42 presidents “unpatriotic.” 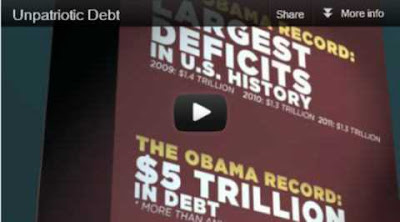 Obama: The Unpatriotic President
A new GOP ad hits the net right here on Independence day calling Barack Obama unpatriotic. OK, the ad doesn’t specifically call him that. In actuality Barack Obama calls himself unpatriotic. From a July 3, 2008 speech Barack Obama called the $4 trillion in debt that we incurred under the Bush administration and the $5 trillion from the first 42 presidents “unpatriotic.”
“The problem is, is that the way Bush has done it over the last eight years is to take out a credit card from the Bank of China in the name of our children, driving up our national debt from $5 trillion for the first 42 presidents – #43 added $4 trillion by his lonesome, so that we now have over $9 trillion of debt that we are going to have to pay back — $30,000 for every man, woman and child. That’s irresponsible. It’s unpatriotic.”
Obama also called it irresponsible. Ahhh but that was four years ago. What has Barack Obama done for the US lately?
He has put us at least $5 trillion deeper in debt, capsized the American healthcare industry, continues to put a greater burden on middle income tax payers and threw away nearly a trillion in stimulus his first year in office.
Yes, Barack Obama has not even had a budget in any of his years in office and it shows. He spends like a drunken sailor (no offense to sailors) and at the same time he offers no real solutions, because when it comes to the economy, the man either is driving us deeper in debt on purpose or is a complete moron. I’m guessing it is a bit of both that is taking place and the GOP must continue to point this out.
However, and let me advise you of this, Congress has been complicit in much of this. Barack Obama signs into law the spending that comes from Congress, even the bill set to be signed on Friday that was theGOP’s breaking their pledge with America. Our elected representatives have got to keep their word or we’re going to have to start getting rid of them every election year, which I don’t think is a bad idea in the first place.

Posted by Max Solbrekken at 7:13 PM