FREE...FREE...FREE AT LAST... Thank God Almighty I am FREE at last... Real Freedom Comes through Jesus Christ our Lord Who purchased our FREEDOM through His precious BLOOD shed on Golgatha's Hill outside the City Walls of Jerusalem, Israel's Capital City founded 3,000 years ago by King David. And thank God for Rev.C.L. Bryant who has escaped from the clutches of the corrupt and sleazy Democratic Party with their hypocritical, political hacks, Al Sharpton and Jessie Jackson, who have been masquerading as Ministers of the Gospel far too long. It is about time someone called them on it. Amen.!!! - Pastor Max Solbrekken

Runaway Slave Could Cause Obama to Lose the Election
Sunday, July 22, 2012 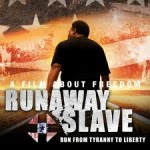 RUNAWAY SLAVE
to Open in Theaters in Philadelphia and Atlanta
July 27, 2012.
Documentary created by Atlanta’s
Ground Floor Video
WHAT: Controversial new documentary featuring Rev. C.L. Bryant -  RUNAWAY SLAVE – opening in theaters in Philadelphia
WHEN: Opening in Philadelphia and Atlanta theaters on July 27.
WHERE:
Regal Warrington Crossing, 40 Easton Rd, Warrington PA 18976
UA Riverview Plaza Stadium 17, 1400 S. Christopher Columbus Blvd., Philadelphia, PA 19147 AMC Barrett Commons 24.  2600 Cobb Place Lane NW.  Kennesaw, GA 30144
WHY: A one-time NAACP local chapter president, Reverend Bryant became a conservative activist after his realization that the entitlement mindset of the “progressive” black community is the equivalent of trading one form of tyranny for another. In the documentary, Reverend Bryant makes the argument that it’s time for a new “Underground Railroad” movement to help liberate all Americans from the contemporary form of a government-run plantation: entitlements.

For more information on the Runaway Slave documentary, please visit www.runawayslavemovie.com.
To book interviews or for more information on the film and the event, please contact:
Lori Heiselman  714-553-5181  [email protected]
About the film:
From the creators of Tea Party: The Documentary Film comes a new documentary about freedom. Runaway Slave exposes the economic slavery of the black community to the Progressive, big government policies of the U.S. government.  The film’s heroes are black conservatives who are speaking out so that all Americans can truly be “free at last.”

The film’s central figure is Rev. C.L. Bryant, a self-professed “runaway slave”. A former NAACP chapter president in Garland, TX, C.L. abandoned an organization he felt was more about political posturing, and less about civil rights. As a former Democratic Radical who escaped the bondage of Progressivism and denounced the shackles of entitlements, he has committed himself to helping others secure the blessings of liberty that are guaranteed by the Constitution with his new found conservative values.

Rev. Bryant takes viewers on an historic journey across America that traces the footsteps of runaway slaves who escaped along routes that became known as the Underground Railroad to freedom. But in the film, he travels a “new underground railroad” upon which Black Conservatives are speaking out against big government policies which have established a “new plantation” where “overseers” like the NAACP and so-called “civil rights” leaders keep the Black community 95 percent beholden to one political party.

Images from national events in Washington, D.C. provide a shocking look into the mindset of the liberal left as they seek to oppress black Americans every day. Its underlying theme asks the questions:

What does the black community have to show for its 95% support of the Democratic Party? Is it truly “free at last?”
Posted by Max Solbrekken at 7:15 PM