After 35 Years Mormon Bishop Leaves:
Is Born Again, Filled with the Holy Spirit
and his Medical Doctor verifies that
He is no longer a Diabetic! 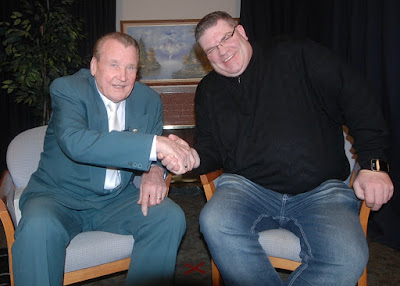 Dr. Max Solbrekken was known as Canada's Missionary Evangelist in 1973. He had taken Christ's Gospel to multitudes across the world since 1965. Through several supernatural events, my husband was led to Valletta Malta where God used him to open that nation to the Gospel of Jesus Christ. After his visit to the Roman Catholic Archbishop Monsignor Michael Gunzi, he was welcomed to conduct the first ever Gospel Crusade in Malta and became the First Protestant Minister in 1,000 years to preach Jesus Christ in Malta! How amazing and wonderful. All Glory to God! - Donna Solbrekken 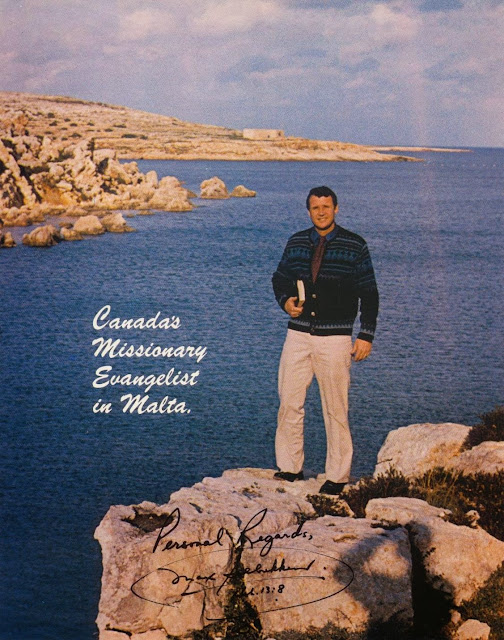 Max Solbrekken standing on a rock at the very spot where St. Paul came ashore after the shipwreck in 60 A.D. Max Solbrekken made history on December 4. 1973 when he became the first Protestant Minister to preach the Gospel publicly to the Maltese people. He broke a 1,000 year-old law that forbade anyone except  a Roman Catholic priest to preach in Malta. That law was put into place by the Knights of Malta 1,000 years earlier to keep out the Muslim hordes. In 1973, Jehovah Witnesses were imprisoned for going from door to door.
After preaching to the Roman Catholic Archbishop His Grace Monsignor Michael Gunzi for about 20 minutes, he warmly offered Max Solbrekken his hand saying: "I wish you the very best success in preaching the Gospel of Jesus to the Maltese people."
The Canadian Preacher was invited to meet the Chief of Police, Mr. Enoch Tonna for a private meeting, in which  he received Jesus Christ as his Lord and Saviour. Shortly thereafter the 1,000 year-old law was abrogated, and since that time there has been complete religious freedom in Malta.
Dr. Max Solbrekken regrets that there is a Muslim Mosque as well as a J.W. Kingdom Hall in Malta, however, there are many Gospel Churches in Valetta and throughout Malta! Amen. 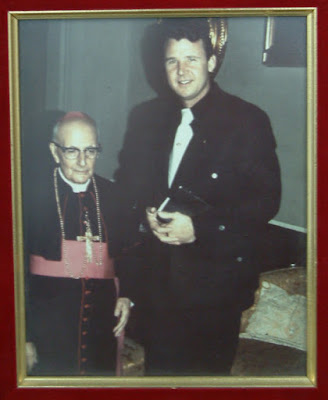 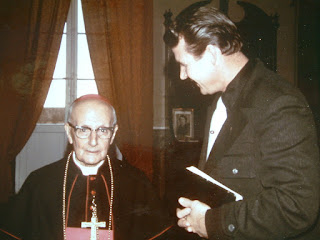 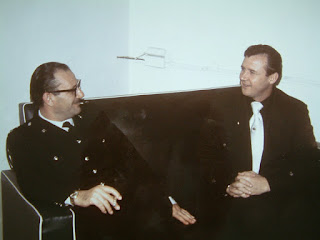 Rev. Max Solbrekken with Chief of Police at
Valletta, Malta on December 4, 1973 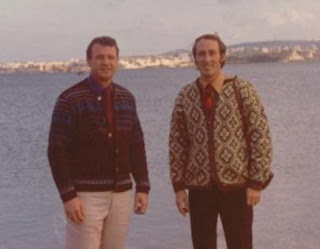 Rev. David Wolfe, Chaplain to Norwegian sailors
with Rev. Max Solbrekken on December 5, 1973,
at the spot where St. Paul came ashore holding
on to the ship's wreckage in 60 A.D. 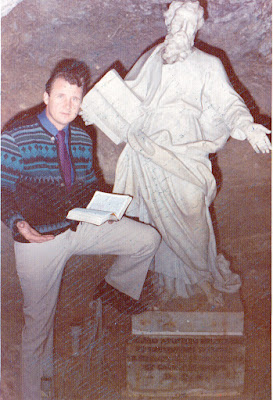 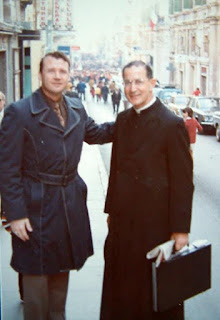 A humble Pastor asking for prayer! 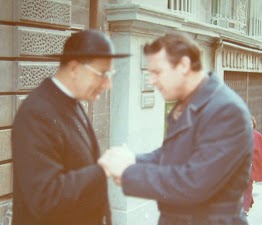 Rev. Max Solbrekken prays for leading
Pastor of the Large Cathedral in Valletta. 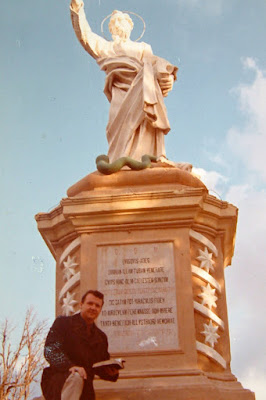 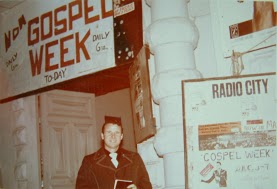 TO GOD BE THE GLORY IN JESUS'
HOLY & PRECIOUS NAME!
Posted by Max Solbrekken at 1:37 PM 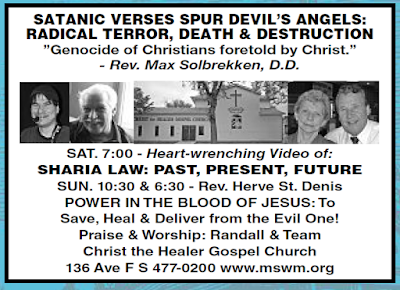 Posted by Max Solbrekken at 7:15 PM

EVERY DAY WITH JESUS:
KEEP THE FAITH!
by Rev. Max Solbrekken, D.D.
Every day with Jesus is sweeter than the day before. Every day with Jesus, I love Him more and more. Jesus saves and keeps me and He's the One I'm waiting for. Every day with Jesus is sweeter that the day before!
More and more, I find myself singing the old hymns and humming the Bible choruses we sang as children. Unfortunately, many little children today do not have the same opportunity to learn the things of God because of parent's neglect and the church's failure to teach them.
J. Edgar Hoover, former Director of the F.B.I. stated: “Children that are brought up in Sunday school are seldom brought up in Court.”
Jesus Christ said: “...Whosoever will come after Me, let him deny himself, and take up his cross, and follow Me. For whosoever will save his life shall lose it; but whosoever shall lose his life for My sake and the Gospel's, the same shall save it.
“For what shall it profit a man, if he shall gain the whole world, and lose His own soul? Or what shall a man give in exchange for his soul?” (Mark 8: 34-37)
A REAL WORLD OUT THERE!
This life doesn't offer many free lunches or instant successes. Our sojourn on Planet Earth is mostly a series of trials, errors and hard work!
Often success only comes on the heels of disappointment and failure. We live in a real world, with very few born into instant money, privilege and position.
For most of us, it's a day to day "bump and grind" existence, with only a minuscule chance of winning a Loto 649 and living the fantasy life projected on TV commercials.
But hard work has never hurt anyone and a little strain, stress and sweat is really quite healthy. The old adage, "If at first you don't succeed, try, try, try again", is good advice indeed!
Abraham Lincoln ran for public office several times and was defeated. He did not give up however, and finally was elected President of the USA and became renowned as one of America's greatest leaders.
Theologian, Dr. Kenneth Taylor sought in vain for a publisher to print his new paraphrase of the Holy Bible. He organized Tyndale House Publishers and has sold more than 35 million copies of the 'Living Bible'.
Science fiction writer, Frank Herbert who authored the galactic epic, 'Dune', was turned down by 20 publishers before his manuscript was finally accepted. His run-away-book has sold over 12 million copies.
If we turn our mistakes and failures into stepping stones rather than stumbling blocks, the experiences we go through are reversed from negative to positive!
But if we take the low road of complaining, sulking and blaming people, it becomes a long term aggravation that eats like a cancer. The Bible says, "As he thinketh in his heart, so is he". Here's a poem that reinforces that truth:

ALL IN THE STATE OF MIND

If you think you'll lose, you've lost;
For out in the world you find
Success begins with a fellow's will,
It's all in the state of mind.

If you think you're outclassed, you are;
You've got to think high to rise.
You've got to be sure of yourself before
You can ever win a prize.

Life's battles don't always go
To the stronger or faster man;
But soon or late the man who wins
Is the fellow who thinks he can."

St. Paul stated emphatically, "I can do all things through Christ, which strengthens me". (Phil. 4:13). And Jesus said, "All things are possible to him that believes". (Mark 9:23)
We must come to God, in simple faith, believing that Christ's victory over Satan, death and Hell has purchased our freedom!
Jesus said, "Ask, and it shall be given you; seek, and you shall find; knock, and it shall be opened unto you: For everyone that asks receives; and he that seeks finds; and to him that knocks it shall be opened". (Matt. 7:7-8)
Four things that most people are vitally concerned about are:
PEACE OF MIND. This comes through the knowledge of salvation, with the forgiveness of sins and the removing of guilt. Jesus said, "My peace I give unto you". (John 14:27)
PROTECTION OF ONE'S HOME & FAMILY. The Bible says, "There shall no evil befall you and no plague shall come nigh unto your dwelling". (Ps. 91:10). The angels of God protect His people.
SECURITY OF ONE'S JOB. The Bible tells us not to be concerned about tomorrow for He shall bless us with abundance. If we put Him first, He has promised to prosper and bless the work of our hands. (Luke 6:38; Matt. 6:33)
CONTINUED GOOD HEALTH. When Jesus died on the cross, He purchased our healing for the Bible states, "He was wounded for our transgressions...and with His stripes we are healed". (Is. 53:5; Matt. 8:16-17)
The Bible says: “TRUST in the Lord, and do good; so shalt thou dwell in the land, and verily thou shalt be fed. DELIGHT thyself also in the Lord, and he shall give thee the desires of thine heart. COMMIT thy way unto the Lord, trust also in Him; and He shall bring it to pass. REST in the Lord and wait patiently for Him...” (Ps. 37: 3-7)
The key is in not giving up. We must make our request to God, seek His Word for an answer and keep knocking until we receive. That's real faith!
Here's a beautiful poem that I hope will inspire you!

I've dreamed many dreams that never came true
I've seen them vanish at dawn
But enough of my dreams have come true, thank God
To make me want to dream on!

I've prayed many prayers when no answer came
Though I waited patiently and long
But answers have come to enough of my prayers, thank God
To make me want to pray on!

I've trusted many a friend who failed me
And left me to weep all alone
But enough of my friends have been true blue, thank God
To make me want to trust on!

I've sown many seeds that fell by the way
For the birds of the air to feed on
But I've held enough golden sheaves in my hands, thank God
To make me want to sow on!

I've drunk of the cup of disappointment and pain
I've gone even days without song
But I've sipped enough nectar from the roses of life, thank God
To make me want to live on!

Here's a sobering little poem which tells the true story of life:

THE SPAN OF LIFE


Let us never lose faith in Jesus Christ, for only He is able to give real meaning to life and death! Amen.
Posted by Max Solbrekken at 10:03 PM

Destroying the Works of Satan!