-  Lest Any Man should Boast  -
BY GOD'S GRACE
ALONE 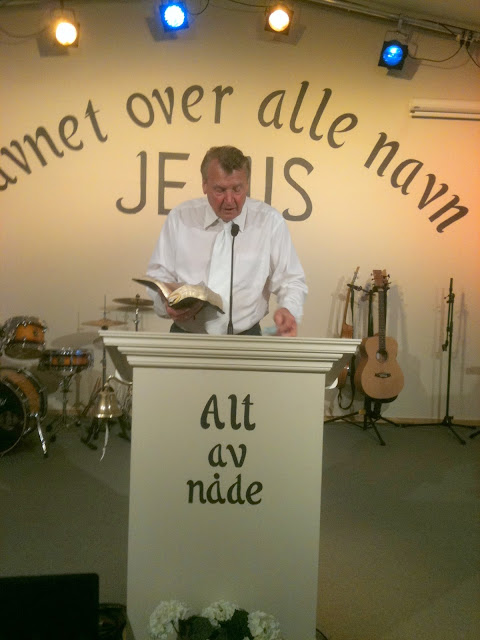 Pastor Max Solbrekken preaches the Gospel of Jesus Christ in Norway, the land of his forefathers and parents Ingvar and Anne Solbrekken.

HIS LIFE FOR MINE:
MY LIFE FOR HIM
By Pastor Max Solbrekken, D.D.
The Bible says: "Grace be to you and peace from God the Father, and from our Lord Jesus Christ, who gave Himself for our sins, that He might deliver us from this present evil world, according to the will of God and our Father:" (Galatians 1:4)
The Gospel of Jesus Christ is the greatest gift ever given. It is the amazing story of God's great love for mankind. His astounding mercy and compassion was exhibited for all to see as Jesus hung naked on the cursed tree, paying the ransom price for our sins!
Christ's vicarious death for all humanity was the expression of God's everlasting goodness and the perfect plan to redeem our fallen race!
"For Christ also hath suffered for sins, the just for the unjust, that He might bring us to God, being put to death in the flesh, but quickened by the spirit." (1 Peter 3:18)
"Christ hath redeemed us from the curse of the law, being made a curse for us: for it is written, Cursed is everyone that hangeth on a tree." (Galatians 3:13)
BUT WHY DID HE DO IT?
There is no rational explanation why anyone would sacrifice his life for the salvation of sinning humanity. To do so for a relative or a near friend, one might consider, but Christ died for the entire human race!
For thousands of years the Jewish Rabbi would make the 'Cry of the Synagogue'. He would cry out: "Let one innocent come and make atonement for the guilty!"
No one answered the call, because no one was qualified. The human race was contaminated by sin! The Bible states:"All have sinned and come short of the glory of God." (Romans 3:23)
Then one day John the Baptist stood forth and pointing to Jesus of Nazareth and said:"Behold the Lamb of God which taketh away the sins of the world." (John 1: 29)
THE INNOCENT ONE HAD COME!
The Bible says: "For God so loved the world that gave His only begotten Son, that whosoever believeth in Him should not perish, but have everlasting life." (John 3: 16)
"For God sent not His Son into the world to condemn the world, but that the world through Him might be saved. He that believeth on Him is not condemned: but he that believeth not is condemned already, because He hath not believed in the name of the only begotten Son of God." (John 3: 17,18)
"He that believeth on the Son hath everlasting life: and he that believeth not the Son shall not see life: but the wrath of God abideth on him." (John 3: 36);
"For the wages of sin is death; but  the gift of God is eternal life though Jesus Christ our Lord." (Romans 6:23); "Hereby perceive we the love of God, because He laid down His life  for us: and we ought to lay down our lives for the brethren.
"Herein is love, not that we loved God, but that He loved us, and sent His Son to be the propitiation for our sins." (1 John 3: 16; 4: 10);
But God commended His love toward  us, in that, while wt were yet sinners, Christ died for us.  Much more than, being justified by His blood, we shall be saved from wrath through Him.
"For if, when we were enemies, we were reconciled to God by the death of His Son , much more, being reconciled, we shall be saved by His life." (Romans 5: 8-10)
I GAVE MY LIFE FOR THEE!
By Francis R. Havergal, 1856 -Lutheran Church Hymnal no. 405

In His High Priestly prayer to His Heavenly Father, our Saviour confirms that He wants us to KNOW who we really are in Him: "That they all may be one; as Thou Father, art in Me, and I in Thee, that they also may be one in Us: that the world may believe that Thou hast sent Me.
"And the glory which Thou gavest Me I have given them;  that they may be one, even as WE are one: I in them, and Thou in Me, that they may be made perfect in one; that the world may know that Thou hast sent Me, and hast loved them, as Thou hast loved Me." (John 17: 21-23)

St. Paul stated: "O the depth of the riches both of the wisdom and knowledge of God! how unsearchable are His judgments, and His ways past finding out! For of Him, and through Him, and to Him, are all things: to Whom be glory for ever. Amen." (Romans 11: 33, 36)
"Blessed be the God and Father of our Lord Jesus Christ, who hath blessed us with all spiritual blessings in heavenly places with Christ. According as He hath CHOSEN us in Him before the foundation of the world, that we should be holy and without blame before Him love:
"Having predestinated us unto the adoption of children by Jesus Christ to Himself, according to the good pleasure of His will, To the praise of the glory of His grace wherein He hath made us ACCEPTED in the Beloved.
"In whom we have REDEMPTION  through His blood, the forgiveness of sins, according to the riches of His grace; wherein He hath abounded toward us in all wisdom and prudence;  Having made known unto us the MYSTERY of His will, according to the good pleasure which He hath purposed in Himself." (Ephesians 1: 3-9)
Almighty God had a secret which He did not reveal to any of the old Testament prophets. It is called Mystery of God which He revealed to St. Paul: “Whereof I am a minister, according to the dispensation of God which is given to me for you, to fulfill the Word of God:
“Even the mystery which had been from ages and dispensations, but now is made manifest to His saints: To whom God would make known what is the riches of the glory of this mystery among the Gentiles: which is Christ in you, the hope of Glory.” (Colossians 1:25-27)
The Mystery of God is the great truth that through the vicarious death and resurrection of His incarnated Son Jesus Christ, sinners both Jews and Gentiles, could be born again and filled with the Holy Spirit of God. And that God would dwell within and work through His children!
It is all so magnanimous that it is literally unspeakable, beyond our intellectual capacity and ‘past finding out.’ It is: In Christ, by Christ, through Christ and for Christ. By His grace we pray for faith unchained, love unfettered, imagination expanded, mercy unending, anchored in truth and peace unsurpassed! Amen.  - To be continued
Posted by Max Solbrekken at 2:27 AM

WHY DOES EVIL EXIST?
By Pastor Max Solbrekken, D.D.
Norwegian Misssionary Nurse Bodil Biørn saw and
witnessed unspeakable atrocities inflicted on the
Armenians in 1890, 1895, 1909, 1915 & 1916. She
took multiple pictures to document the slaughter.
The Armenian Genocide was the systematic evil
extermination of 1.5 million Christian Armenians
within the demonized  Muslim Ottoman Empire
from 1914-1923. The judgment of God awaits
those wicked, inhumane perpetrators! 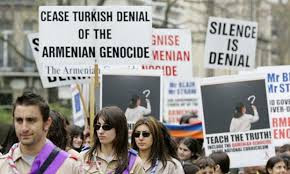 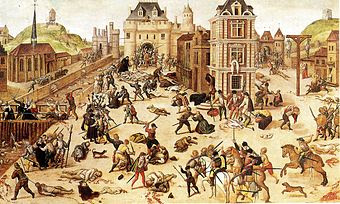 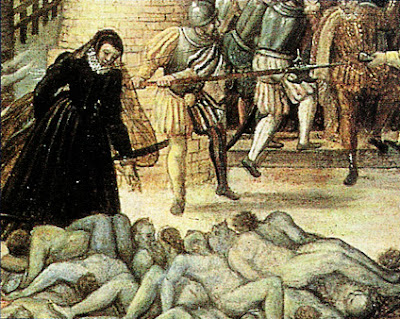 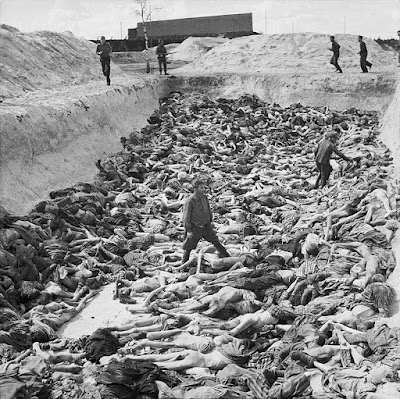 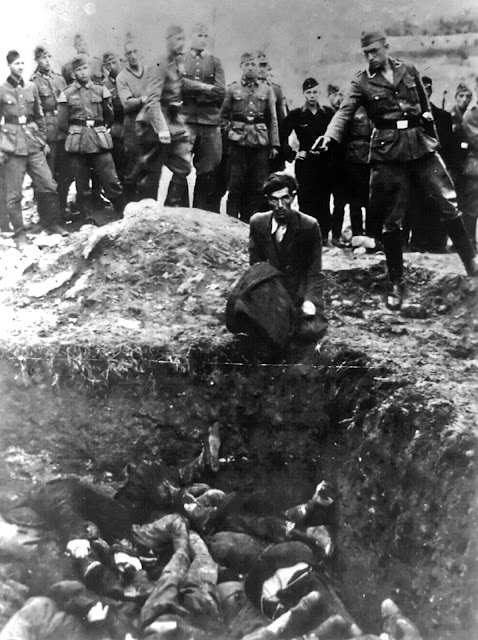 “For without are dog, and sorcerers, and whoremongers, and murderers, and idolaters, and whosoever loveth and maketh a lie. I Jesus have sent Mine angel to testify unto you these things in the churches. I am the root and offspring of David, and the bright and morning star.
“And the Spirit and the bride say, Come. And let them that heareth say, Come. And let him that is athirst come. And whosoever will, let him take of the water of life freely.
“For I testify unto every man that heareth the words of the prophecy of this book, If any man shall add unto these things, God shall add unto him the plagues, that are written in this book: And if any man shall take away from the words of the book of His prophecy, God shall take away his part out of the Book of Life, and out of the Holy City, and from the things which are written in this Book.
“He which testifieth these things saith, Surely I come quickly. Amen. Even so, Come, Lord Jesus. The grace of our Lord Jesus Christ be with you all.” (Revelation 22: 12-21)
HERE IS THE BOTTOM LINE!
Jesus Christ came into the world to save sinners. (1 Timothy 1: 15); St. Paul said, “Thanks be unto God for His unspeakable gift.” (1 Corinthians 9: 15). The Golden text of the New Testament states: “For God so loved the world that He gave His only begotten Son whosoever believeth in Him should not perish but have everlasting life. For God sent not His Son into the world to condemn the world, but that the world through Him should be saved.” (John 3: 16, 17)
Here is the final warning: Don’t gamble with your eternal soul and don’t play games with God. Take His warning seriously! St. Paul writes: “If any   love not the Lord Jesus Christ, let him be Anathema. Maranatha.” (1 Corinthians 16:22). What does that mean?
Anathema (suspended) means that a curse as well as a blessing has its operation in Christ’s Kingdom and rises to its highest power at Christ’s Coming. He will surely come to bless as well as curse.
“The religious curse of the Hebrews was used as the church censure and  final ex-communication. Why did Paul insert, without translation, an Aramaic formula in a Greek letter to Corinth, where Aramaic was not current? No doubt, it was because Maranatha was a FIXED and widely circulated formula.
“It was understandably a key expression in the liturgy of the primitive church in Palestine, and from there it was passed into Greek Christendom without translation in fashion similar to Amen and Hosanna.”- anon
This was an exclamation of the approaching Divine Judgment.  It means that there will be great blessing for believers but a Divine Censure or curse upon unbelievers! Amen.
Posted by Max Solbrekken at 4:41 PM