In my ungodly drunken state, I threatened to shoot Pastor Max Solbrekken, but he cast the demons out of me in JESUS' Name. I am now 87 years old and have been walking with God ever since Jesus freed me! It is good to see my beloved friend, Max Solbrekken again." - Evangelist Earnest Hunter 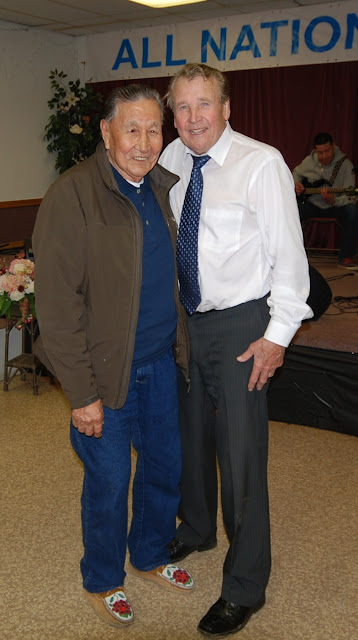 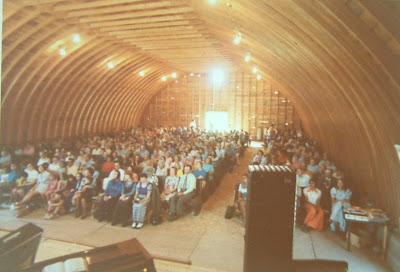 Earnest & Rose Hunter's Wedding at Sandy Lake, AB
Earnest Hunter  & Max Solbrekken met again after many years on April 21, 2013 in the High Prairie, Alberta Crusade. In 1976, Earnest Hunter had messed up his life, was shacked up and drinking heavily. One day he listened to  Max Solbrekken preaching against the sins of immorality and drunkenness on Radio CFCW.

He told his brother and others that he planned to kill the preacher because he was preaching about him over the radio. They tried in vain to stop him. After drinking heavily for one week, he set out in his pick up truck with his 30-30 in the gun rack, ready to confront the preacher.

Earnest walked into the Edmonton Revival Centre and met Pastor Keith Driver at the door who offered him his seat  in the packed building. Dismissing the invitation, he strode toward the front and Pastor Max stepped down from the pulpit to meet him.

"I've got my 30-30 in the pick-up and I am going to kill you" he shouted. "Why would you want to kill me, Earnest?" asked the preacher. "You been preaching about me on the radio, telling everybody that I am shacked up and drinking." Pastor Max spoke to the Evil Spirit within Earnest, "You lying Devil, you cannot hurt me." Quick as a flash he took him down and pinned him to the floor while commanding the Evil Spirits to leave him. After a few minutes, Earnest became normal and totally sober.

HERE IS HIS TESTIMONY: "I found myself on the floor in the arms of Brother Max who was praying for me. I said: 'Brother Max, why would I want to kill you?' He said, 'Ask Jesus to forgive you and tell Him that you will serve Him', and I called upon the Lord there on the floor and repented of my sins and He forgave me and I haven't turned back since that day."

"Some time later we had a great Wedding at Sandy Lake Bible Camp and Pastor Max performed the ceremony, joining Rose and me together in the name of our Saviour. Praise the Lord and I've been preaching ever since!"
Posted by Max Solbrekken at 4:08 PM