Will the Amateur Hour US President smell the Coffee and listen to the mature Canadian Prime Minister Stephen Harper instead of getting instructions from hyper left wing weirdos like Chris Mathews, Bill Mahar, Michael Moore and Hollywood Greenies & Tree Huggers. He`d better get some good old fashioned Tim Horton`s Canadian coffee to wake him up. - Pastor Max Solbrekken 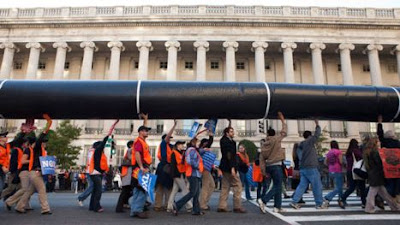 ·
Nov. 6, 2011: Demonstrators carry a mock pipeline during an anti-Keystone rally in front of the White House in Washington.(REUTERS)
President Obama, after winning a second term, is facing renewed pressure to approve the Canada-to-Texas Keystone XL pipeline as one of his first orders of business.
The president had delayed approval of the project in January, amid vocal opposition by environmentalists. The decision created a rare alliance -- both Republican lawmakers and unions clamored for an end to the stonewall, pointing to the thousands of jobs that could come with Keystone.
Now that Obama has secured another four years, he doesn't have to walk the tightrope between the Sierra Club and the AFL-CIO. And everyone from Canadian officials to energy industry magnates voiced hope this week that the Obama administration would ultimately side with the jobs.
The latest was Canadian Prime Minister Stephen Harper, who according to Reuters said in India Thursday that he's "optimistic" the pipeline will be approved.
"Evidently the next steps will be very soon," he said.
Mitt Romney, for his part, pledged to green-light the project on Day One if he had been elected. American Petroleum Institute President Jack Gerard indicated there's no reason Obama can't do the same.
"Right off the bat, the president can approve the Keystone Pipeline and put thousands of Americans to work immediately," Gerard said in a statement.
The $7 billion pipeline project, which would transport tar sands crude from Canada to the Gulf of Mexico, emerged at the center of an international fracas involving dozens of interest groups, the governments of Canada and the U.S., and a steady parade of celebrity protesters.
The State Department last fall postponed a final decision on the permit, before Obama in January rejected the application -- in response to an effort by Republicans to compel a decision.
Since then, though, company TransCanada has submitted a new application that would reroute the project around the environmentally sensitive Nebraska region of Sand Hills.
Opponents of the project have cited environmental and health concerns -- since the original route through Nebraska passed by a vital aquifer. They also cite the greenhouse gas emissions from oil sands production.
Keystone foes also weren't letting up. A coalition of environmental activists -- from the Sierra Club, Greenpeace and other groups -- swiftly announced a protest outside the White House on Nov. 18.
In a post-election open letter, they renewed their concerns that the pipeline would "transport one of the world's dirtiest, most carbon-intensive fuels."
It continued: "Now that the election is over a decision by the president is imminent-the administration has hinted a decision could come in the first quarter of 2013. Here's what's changed since last year: the Arctic has melted disastrously. Here's what hasn't changed: Keystone XL is still a crazy idea, a giant straw into the second biggest pool of carbon. Even if it doesn't spill, it would add 900,000 barrels of oil worth of carbon each day to the earth's atmosphere."
Canadian officials, though, continue to press hard for the project's approval. Canada's natural resources minister went further than Harper, saying he thinks the project will ultimately be approved.
"I don't know exactly why he postponed it, but the point is right now we're not in the middle of an election campaign and it will be decided by the administration on its merits," he told Bloomberg.
·
Posted by Max Solbrekken at 12:02 PM