Increasing Threats from Obama and the Gang…Scared Yet? 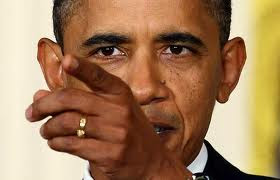 This is the kind of thing Mr.
Obama’s “leadership” inspires.
Bill Maher on HBO recently: “If you’re thinking about voting for Mitt Romney, I would like to make this one plea: black people know who you are and they will come after you.”
Paul Begala, Democrat operative: “California, Illinois and New Jersey – Places Where They’d Hunt Romney Down With Dogs.”  [http://newsbusters.org]
Chris Matthews says all who disagree with him and Obama are “pigs.”
Barack Obama urges voters to take “revenge” on Romney and like-minded citizens.
Obama’s henchwoman Valerie Jarrett says she can’t wait to win the election so she can “punish” all who stand opposed to her messiah.
Michael Moore, speaking through a select group of elderly, threatens to “burn this mo********ker down” if Romney wins, directing a threat of personal violence against Romney should Obama lose.

Special Assistant to the President Kareem Dale said that people with disabilities are going to be “absolutely killed” under the proposed policies of Mitt Romney and delivered a strong message to the crowd: “let’s win this mo********er.”