Almighty God has a message for Jew Haters: "My Covenant I will not break, Nor alter the Word that has gone out of My lips. Once I have sworn by My Holiness, I will NOT LIE to David: His seed shall endure forever and his throne as the sun before Me; It shall be established like the moon, even like the faithful witness in the sky. Selah." (Psalms 89: 34-37) The Jew hating Mohammedans should STOP offending the Eternal Lord God Almighty, the God of Abraham, Isaac and Jacob, the Father of our Lord Jesus Christ (2 Cor.1: 3). Almighty God spoke through the Prophet Jeremiah with these words of WARNING to those who hate Israel: "Thus saith the LORD, Who gives the sun for light by day and THE FIXED ORDER of the moon and the stars for light by night, Who stirs up the sea so that its waves roar - the Lord of Hosts is His name: If this FIXED ORDER departs from before Me, says the LORD then shall the descendants of ISRAEL cease from being a nation before Me FOREVER. Thus saith the Lord: If the heavens above can be measured and the FOUNDATIONS OF THE EARTH BELOW can be explored, then I will cast off all the descendants of ISRAEL for all that they have done, says the LORD." (Jer. 1: 35-37) What does that mean? GOD SAYS TO JEW HATERS: "If you are able to to destroy the intricate solar system, stopping the functions of all heavenly bodies and measure the 'ever-expanding-universe' and x-ray the innermost core of this planet, then you will be able to destroy God's Chosen People, ISRAEL." Joseph Stalin, Adolf Hitler, Gamel Nasser, Islamic nutcase Idi Amin, Ayatollah Khomeini & Islamic Terrorist Usama bin Laden are all GONE down into the PIT but Israel survives. He will take out Iran's President Mahmoud Ahmadinejad and anyone else who challenges Him. - Pastor Max Solbrekken

Copenhagen. (AP)
(CNSNews.com) -- Because of what it termed “concrete risks” to the security of a Jewish group at a diversity festival in Copenhagen, Denmark, the city government there advised the group not to display a large Israeli flag at their festival booth.
In an interview with CNSNews.com, Danish Zionist Federation spokesperson Jonatan Sousa said that when the group asked the Copenhagen city officials to participate in the early September festival, it was asked not to make the Israeli flag visible.
“When the Danish Zionist Federation announced to the city municipality that we wanted to participate in the diversity fair, we were asked not to show ‘visibly’ the Israeli flag. We were told that there was a danger for our safety if we were to be visible,” Sousa said in a statement to CNSNews.com.
He added that a “left-wing organization” started to hand out fliers in front of the Danish Zionist Federation booth, accusing the group of racism.
Soon after, the police stepped in and asked the left-wing activists -- which according to Sousa was made up mainly of Arab men -- to distribute their fliers away from the booth to avoid conflict.
“We had planned to have a large flag on top of our stand but instead we kept flags inside our tent,” said Sousa.  “We were also asked to wait until a few minutes before the festival started to set up our tent with Israeli flags. Again, because of safety reasons.” 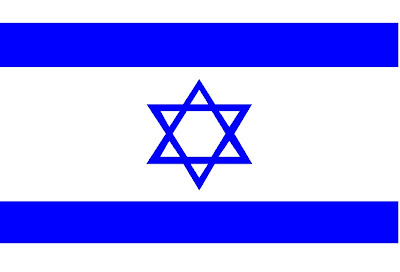 Flag of Israel.
“Simply, the city municipality was afraid that the festival, which cost more than $150,000 in taxpayer money, would end up in violence if Danish left-wing and Arab youngsters attacked the Israeli tent. The festival is held to celebrate diversity and if it ended in anti-Jewish violence this would be a tragedy for the mayor,” Sousa told CNSNews.com.
Copenhagen City officials said they asked the Zionist group not to display bigIsraeli flags for security reasons, and apologized if their security concerns were interpreted as discriminatory.
“We did not ask Danish Zionist Federation not to display the flag. There were many Israeli flags in the tent that belonged to Danish Zionist Federation, who along with Palestinian, Russian, Chinese and many other organizations and associations celebrated diversity in Copenhagen,” a Copenhagen City Hall spokesperson said in a statement to CNSNews.com.
“Because of security reasons we did advise Danish Zionist Federation not to put up big flags in front of their tent,” read the statement. “We gave that advice only for security reasons as there unfortunately were concrete risks.”
City Hall also confirmed to CNSNews.com that there were Israeli flags on display at the Zionist group’s booth during the festival.
The Copenhagen Post reported on Oct. 26 that the Copenhagen deputy mayor for employment and integration, Anna Mee Allerslev, said, “No one should feel excluded from a diversity festival,” and also apologized to the Zionist group for any misunderstanding.
“We had some experts who were deeply concerned about the situation and were afraid that the security was not sufficient,” she said. “This was advice, it was not a ban. It was done with the best of intentions.”
The Smag Verden – Mangfoldighedsfest (Taste the World) is an annual City Council-sponsored festival that features food items from different cultures. It was held September 1-2  of this year.
Posted by Max Solbrekken at 10:02 AM