Benjamin Netanyahu: Leader of the Free World? J.Matt Barber is a clear thinker and no 'Brain Washed Groupe' like so many Main Stream journalists. He makes some very good points about PM Benjamin Netanyahu. As a Canadian I would have to say that PM Stephen Harper would be right up there with the Israeli Prime Minister. I join with Matt Barber asking all praying Christians to seek the face of God for the protection of the Jewish people and the Nation of Israel at this very serious and perilous time for all freedom loving people. - Pastor Max Solbrekken 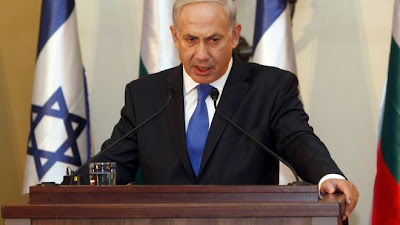 There has been much talk of late about America’s “fiscal cliff.” As troubling as our impending (Obama-spurred) economic collapse may be – and it is more troubling than even our most pessimistic economists are willing to admit –

I’m even more concerned about fast-mounting

tensions worldwide.
As the world government ship of fools drifts unmanned amid a sea of unparalleled global volatility, we, her passengers, behold – brewing on the horizon – an economic and foreign relations “perfect storm.”
As so often is the case, the hurricane swirls around the Middle East. Historically, the president of the United States has captained the ship. He has, heretofore, been duly regarded “leader of the free world.”
Not now. Not with Gilligan reaching for the helm.
Indeed, the current occupant of the Oval Office spends more time with his feet on JFK’s Resolute desk than he does leading from behind it.
But “leading from behind” he does.
More commonly known as “following,” President Obama’s follow-the-leader strategy in the Middle East represents, in my view, either inherent weakness on his part, sympathy toward the Islamic cause or both.
I suspect both.
Indeed, during his first term, Mr. Obama betrayed both weakness personified and sympathy toward the goals of Islamic fundamentalism with his ongoing embrace of the Muslim Brotherhood.
This extremist group, with Obama’s help, now controls much of the Arab world. It has sworn, in its own words, to “destroy” our “Western civilization from within … so that it is eliminated and God’s religion (Islam) is made victorious over all other religions.”
Not surprisingly, today the Brotherhood rushes to the aid of both the terrorist group Hamas and Holocaust denier Mahmoud Abbas, head of the Palestinian Authority. This, as terrorists ramp-up decades-long rocket attacks and suicide bombings against innocent Israeli women and children.
Nonetheless – and clearly stemming from a cynical political calculus – Mr. Obama persists in paying shallow lip service to support for Israel. All the while he continues to play footsie with the Muslim Brotherhood.
Recall that, just last year, the president touted the “Arab Spring” – which any high school history buff could have predicted would devolve into the utter chaos it has – as “an extraordinary change taking place,” wherein, “Square by square, town by town, country by country, the [Muslim] people have risen up to demand their basic human rights.”

(You know, like the Quran-given right for Muslim men to beat or kill women and homosexuals with impunity; or like the human right for both Iran and the Palestinian Authority to “wipe Israel from the face of the earth.”)

Whether due to naiveté, foolishness or pure dishonesty, President Obama’s bungling of the Middle East crisis – let alone his unprecedented attacks on our constitutional freedoms stateside – has disqualified him to lead the free world.
And so, Israeli Prime Minister Benjamin Netanyahu has stepped forward to answer the call. He has become de facto leader of the free world – chief defender of Western civilization. As America’s light fades under the Obama regime, Israel has become – for now at least – “the shining city on the hill.”
With a nuclear Iran perhaps only months away, Western civilization needs defending now more than ever. Israel needs defending now more than ever. Consider these words from top Hamas cleric Muhsen Abu ‘Ita: “Annihilation of the Jews here in Palestine is one of the most splendid blessings for Palestine.”
Thus, Israel defends herself. Israel defends the free world. To be sure, the worldwide Islamic juggernaut has become emboldened by the actions – by the inaction – of a sympathetic, do-nothing U.S. president. Muslim terrorists have, as the Israel Defense Forces (IDF) recently noted, “turned Gaza into a frontal base for Iran, terrorizing residents of Israel and forcing them to live under unbearable circumstances.”
Yet, inexplicably, many in the West – people Vladimir Lenin might have called “useful idiots” (i.e., “progressives,” mainstream media and moderate American Muslims) – willfully suspend disbelief. They play directly into the blood-soaked hands of these terrorist cowards.
Having time and again demonstrated a willingness to sacrifice their own innocent people (consider child suicide bombers), these monsters today both deliberately target Israeli neighborhoods with rockets and intentionally place their own military launch sites and terrorist headquarters next to mosques, playgrounds, factories and the like.

This, as intended, has created a propagandist boon. Much of the world blames Israel when these human shields are tragically killed during pinpoint military strikes. Who needs missile defense when you have women and children to hide behind? To both the Israeli and the Arab victims of radical Islam, I say this: You are in our thoughts and our prayers. Our hearts break for you. We pray that God will cover and protect you during these dark days and nights.
To Benjamin Netanyahu I pledge this: Mr. Prime Minister, Christian America thanks you for your bold leadership. We thank you for being the lone voice of freedom in the Middle East.
Sir, you, too, are in our thoughts and our prayers.
America stands with Israel.
We demand our president do the same.
Matt Barber is an attorney concentrating in constitutional law. He serves as vice president of Liberty Counsel Action. (This information is provided for identification purposes only.) “Follow Barber on Twitter.
Posted by Max Solbrekken at 10:33 AM