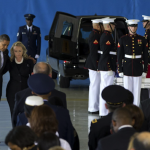 At least one former judge and district attorney has openly declared that President Barack Obama and Secretary of State Hillary Clinton are guilty of perjury and should be held accountable for it.

Today, Judge Pirro serves as a legal analyst for Fox News.  As legal analyst, she reviewed the known facts surrounding the terrorist attack in Benghazi, Libya, that claimed the lives of U.S. Ambassador Christopher Stevens and three other brave Americans.  In her report, she lays out the evidence that clearly indicates that both Obama and Clinton lied to the families of the victims and to the American people.

She presents a great case against them, showing some of the skills as a former district attorney.  There is no doubt that as a judge, she would readily convict both of them of perjury and possibly even treasonous acts against the United States.

However, with the presidential election taking place tomorrow, there isn’t much that can or will be legally done to hold them accountable.  Besides, our Congress has shown that they don’t have the fortitude to take legal action against Obama for the dozens of criminal acts he has committed since stealing the U.S. presidency.

Our only hope is that both Obama and Clinton be brought up on charges after the election is over.  Their crimes are serious enough to have them removed from office and even imprisoned.  If by some miracle the Republicans regain control of the Senate and maintain control of House, they just may grow enough of a spine to do their jobs to protect the American people.  Even if Obama is elected a GOP controlled Congress can and should impeach him and remove him from office.

I know how unlikely that is but if they do, they need to impeach his comic side kick Biden along with Secretary of State Clinton so that none of them are allowed to move in to the Oval Office.  America needs to clean house starting with the big one on the Hill and perhaps start by appointing Judge Jeanine Pirro as special prosecutor over the whole thing.