Worse Than Watergate? Remember, Nobody Died At Watergate. Truthful people can smell the Rat. Senator John McCain says: "It's either deception or gross incompetence. Either way, Barack Obama has proven that he is not capable of being Commander-in-Chief." - Will anyone in the White House will be indicted, fired or incarcerated? Or will the Democrat-Cover-up hold? - Pastor Max Solbrekken

WH: ‘We Decline to Comment’ on When Obama Learned of E-Mails, Met With NSC on Benghazi
By Fred Lucas
October 24, 2012 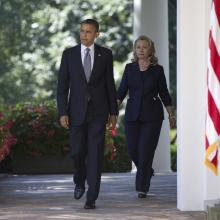 President Barack Obama and Secretary of State Hillary Clinton at the White House on Sept. 12, 2012. (AP Photo/Evan Vucci)
(CNSNews.com) - The White House is declining to say when President Barack Obama first learned of three e-mails that the State Department sent to the White House on Sept. 11, 2012, directly notifying the Executive Office of the President that the U.S. Consulate in Benghazi was under attack, that U.S. Amb. Chris Stevens was at the Benghazi mission at the time of the attack, and that the group Ansar al-Sharia had taken credit for the attack.

Biden The Idiot Rides Again!!!!!!!!!!!
The father of one of the former Navy SEALs killed in the terrorist attack on the U.S. mission in Benghazi, Libya says President Barack Obama wouldn’t even look him in the eye and Vice President Joe Biden was disrespectful during the ceremony when his son’s body returned to America. He also says the White House’s story on the attack doesn’t pass the smell test.

Charles Woods, father of Tyrone Woods, called into “The Glenn Beck Program” on TheBlazeTV Thursday and recounted his interactions with the president, Secretary of State Hillary Clinton and Biden at the ceremony for the Libya victims at Andrews Air Force Base in Maryland.

He told host Glenn Beck that what they told him, coupled with new reports that indicate the Obama administration knew very good and well, almost immediately, that a terrorist attack was occurring in Benghazi, make him certain that the American people are not getting the whole truth.

Vice President Biden, as he has become known to do, reportedly made a wildly inappropriate comment to the father who had just lost his hero son.
Woods said Biden came over to his family and asked in a “loud and boisterous” voice, “Did your son always have balls the size of cue balls?”
“Are these the words of someone who is sorry?” said Woods.
Read more at freerepublic.com
Posted by Max Solbrekken at 11:11 AM