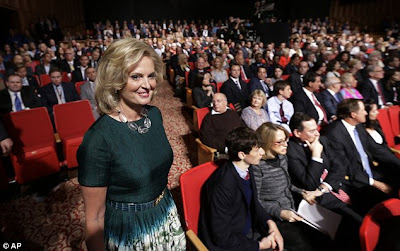 Last week, Ann Romney proudly told the ladies of The View she is pro-life. What some may not know, is that she would be the first First Lady in the White House to defend the life of the unborn since the 1973 court decision of Roe v. Wade made abortion legal.

Pat Nixon declared herself pro-choice after the 1973 court case Roe v. Wade, making her the first First Lady to do so. Prior to the court decision, her views on abortion were a bit more mixed. In 1972 she stated, “I'm really not for abortion. I think it's a personal thing. I mean abortion on demand—wholesale.”

Nancy Reagan spoke to a class at George Washington University and revealed her view of abortion. Carl Sferrazza Anthony, an instructor who taught “The President’s Spouse”course, posed the question.
"I'm against abortion," she said. "On the other hand, I believe in a woman's choice."

Barbara Bush writes in her autobiography that she “She supports abortion rights. But, her opinion didn’t matter because she’s not elected by the American people.”

Mrs. Bush’s pro-choice ideology is perhaps the most surprising given her past struggles. Mrs. Bush suffered a miscarriage when her son, former President George W. Bush, was just a teenager. She was so overcome with emotion that she kept the miscarried fetus, put it in a jar to take to the hospital and showed it to her son. In a 2010 interview with Matt Lauer, the former president revealed how deeply that moment affected him, remaining as the reason he became pro-life.

However, the tragedy did not have a similar affect on Mrs. Bush. Not only did she tell Barbara Walters in 1994 she was pro-choice, the former First Lady even argued the Republican Party should abandon its anti-choice platform during the 2000 presidential campaign.
Hillary Clinton is not one to shy from discussing her views on abortion.

“I am and always have been pro-choice, and that is not a right any of [us] should take for granted. There are a number of forces at work in our society that would try to turn back the clock and undermine a woman’s right to chose, and [we] must remain vigilant.”

Hillary delivered a speech to NARAL, the National Abortion Rights Action League , on January 22, 1999, in Washington, D.C., stating her goal of “keeping abortion safe, legal and rare into the next century. ”

Mrs. Clinton also attempted to transform the health care industry, stating in 1993 that under her plan, abortion services “would be widely available.”

Laura Bush became the second Mrs. Bush to surprise everyone with her perspective on abortion. In May 2010, she spoke candidly on Larry King Live about her support of abortion rights.

In the interview, she recalls how Katie Couric asked her the day of her husband’s inauguration if Roe v. Wade should be overturned. She replied “no” because she didn’t want her husband’s presidency to begin with the suggestion he would overturn a Supreme Court ruling. However, Mrs. Bush continues to tell Larry King it’s “important [Roe v. Wade] remain legal – it’s important for people for medical reasons and other reasons.”

In 2004, Mrs. Obama wrote a fundraising letter to her husband Barack to raise money for his Illinois Senate seat in which she defended partial-birth abortions.

"The fact remains, with no provision to protect the health of the mother, this ban on a legitimate medical procedure is clearly unconstitutional and must be overturned," Michelle Obama writes in the letter.

Partial birth abortion, which Mrs. Obama describes as “legitimate” medicine, is a three-day-long procedure during the middle trimester of pregnancy, which involves the jamming of scissors into the back of the baby’s head.

Also, during her speech at this year’s Democratic National Convention, the First Lady proclaimed that the president “believes that women are more than capable of making our own choices about our bodies and our health care. “That’s what my husband stands for.”

Ann Romney will be the first First Lady to stand behind her husband and the pro-life movement.

Posted by Max Solbrekken at 1:06 PM