You can Run but you can't Hide. The Truth will get out Sooner or Later. The problem is if Obama is IMPEACHED he may became more popular, the same as President Clinton. Are Americans sick or what? Have they totally lost their moral and spiritual courage? How could Clinton the First Oral Sex president and Obama the first Gay Same Sex President hold such power over the USA. How ignorant can a people become? The German people were intelligent and yet the Nut Case Adolf Hitler mesmerized them. Satan works in different ways to subjugate free nations. How very sad! - Pastor Max Solbrekken

Obama avoids question on whether Americans in Libya were denied requests for help
Published October 27, 2012
FoxNews.com 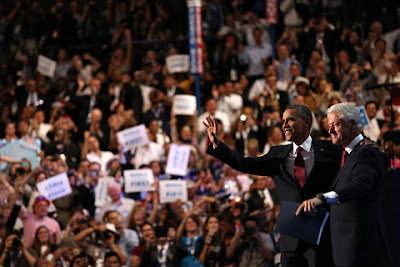 If this doesn't sink the Amateur, probably nothing will. 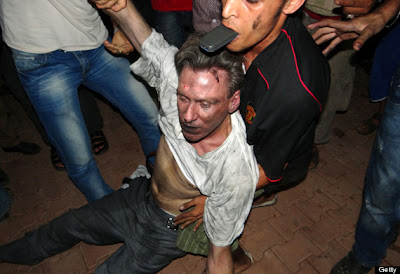 President Obama has declined to answer directly whether a CIA annex was denied urgent requests for military assistance during the deadly attacks last month on U.S. outposts in Libya.

The president said neither yes or no Friday when asked pointedly whether the Americans under attack in Benghazi, Libya, were denied requests for help during the attack.

Fox News has learned from sources on the ground during the Sept. 11 attacks that the CIA chain of command twice told agency operatives to “stand down.”

“The election has nothing to do with the four brave Americans getting killed and us wanting to find out exactly what happened,” the president said first in a TV interview with an NBC affiliate in Colorado.

When asked again, Obama said, “The minute I found out what was going on, I gave three very clear directives -- Number 1, make sure that we are securing our personnel and doing whatever we need to,” the president said in a TV interviews with an NBC affiliate in Colorado.

The first attack occurred at the American consulate in Benghazi, killing U.S. Ambassador Christopher Stevens and U.S. diplomat Sean Smith.
Former Navy SEAL Tyrone Woods was part of a small team that was at the CIA annex about a mile from the consulate when it came under attack. Upon hearing shots fired, team members asked higher-ups at the annex if they could go the consulate. However, they were told to "stand down," according to sources familiar with the exchange.

Woods and at least two others ignored those orders and went to the consulate, evacuating survivors and Smith, who had been killed in the initial attack.

They could not find the ambassador and returned to the CIA annex at about midnight. At that point, they called again for military support and help because they were taking fire at the CIA safe house, or annex.

The request was denied. Woods and fellow former Navy SEAL Glen Doherty were killed at the annex by a mortar shell at 4 a.m.
The CIA and Defense Department have denied claims about requests for support being rejected.

"The agency reacted quickly to aid our colleagues during that terrible evening in Benghazi," said CIA spokeswoman Jennifer Youngblood. "Moreover, no one at any level in the CIA told anybody not to help those in need. Claims to the contrary are simply inaccurate.”

Defense Secretary Leon Panetta said there was not a clear enough picture of what was occurring on the ground in Benghazi to send help.
"There's a lot of Monday morning quarterbacking going on here," he said Thursday. "But the basic principle here ... is that you don't deploy forces into harm's way without knowing what's going on."

Obama also said in the TV interview, as he said previously said, the administration is going to “investigate what happened to make sure it never happens again” and  find out who was involved in the attack so they can be brought to justice.

“I guarantee you that everybody in the State Department, our military, CIA, you name it, have a No.1 priority making sure that people are safe. These are our folks. And we're going to find out exactly what happened but what we're also going to do is make sure that we are identify those who carried out these terrible attacks,” the president said.
--------------------------------------

Father of ex-SEAL: Those who denied request for help at consulate 'murderers of my son' 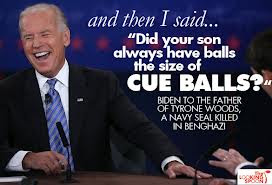 A Goofball without Decency or Shame 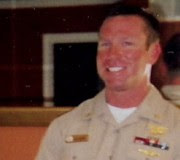 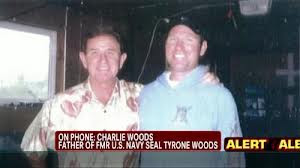 The father of a former Navy SEAL killed in the Libya terror attack last month said Friday that U.S. officials who denied a request for help while the diplomatic compound in Benghazi was under attack "are murderers of my son."

Charles Woods was reacting to accounts by Fox News sources that a request from the CIA annex for backup was denied by U.S. officials. His son, Tyrone Woods, was killed in the Sept. 11 assault.

"They refused to pull the trigger," Woods said. "Those people who made the decision and who knew about the decision and lied about it are murderers of my son."
Woods said he forgives whoever denied the apparent request, but he urged them to "stand up."

Sources also said Tyrone Woods and others, who were at the CIA annex about a mile from the U.S. consulate, ignored orders by their superiors to stand down and not go to the consulate to help. Woods went to the consulate, and hours later he was killed back at the annex.

Charles Woods said his son's action "does not surprise me."
"I wish that the leadership in the White House had the same level of moral courage and heroism that my son displayed," he said.

CIA spokeswoman Jennifer Youngblood on Friday denied the claims that requests for help on Sept. 11 were denied.

"We can say with confidence that the Agency reacted quickly to aid our colleagues during that terrible evening in Benghazi," she said. "Moreover, no one at any level in the CIA told anybody not to help those in need; claims to the contrary are simply inaccurate.  In fact, it is important to remember how many lives were saved by courageous Americans who put their own safety at risk that night-and that some of those selfless Americans gave their lives in the effort to rescue their comrades."

Woods, in interviews earlier this week, also described a series of conversations he had with administration officials at the memorial service held Sept. 14.

He said that Secretary of State Hillary Clinton -- despite signs early on that militants were behind the attack -- pledged to him at that event that she would pursue the maker of an anti-Islam film that had been linked to other protests.

"Her countenance was not good and she made this statement to me ... she said we will make sure that the person who made that film is arrested and prosecuted," he said on radio host Glenn Beck's online show, adding that she also apologized. Woods said he "could tell that she was not telling me the truth."

The account shows an apparent disconnect between evidence that extremists were involved in the attack -- including a newly released State Department email on the day of the attack saying the militant Ansar al-Sharia had claimed responsibility -- and the desire by some to focus strictly on the film as the cause.

The State Department on Friday reiterated that the administration is committed to seeking justice for those responsible.

"Since the moment they were first given the terrible news of their loss, through that very difficult day when they witnessed the return of the remains of their loved ones, and every day since, the families of those killed have been a top priority of the department," State Department spokesman Mark Toner said Friday. "And everything is being done to bring to justice those responsible for their deaths."

Clinton and the rest of the administration made repeated reference to the video in their public comments in the days after the attack. U.S. Ambassador to the U.N. Susan Rice said on Sept 16 the attack was a "spontaneous" reaction to demonstrations over the video. The administration even funded an ad in Pakistan condemning the video.

Intelligence officials have since given a mixture picture, saying the strike was a coordinated terror attack -- but also leaving open the door to the possibility that militants reacted opportunistically to the protests in Egypt at the time over the film.
Sens. McCain, Graham and Ayotte wrote a letter requesting the immediate declassification of all surveillance video in and around the U.S. Consulate in Benghazi for the two days that it was under attack.
"It is vitally important that the American people know all of the facts surrounding the attack in Benghazi last month, and this surveillance video can shed important light on the nature of the attack and what kind of response could have been effective while it was ongoing," the letter said.
Woods also described encounters on Sept. 14 with Vice President Biden and President Obama.
He claimed that at one point, Biden came over to him and said, "in an extremely loud and boisterous voice, 'did your son always have balls the size of cue balls?'"
Woods said in the Beck interview: "I will ask you the question, is that the voice of someone who is truly sorry?"
In a separate interview with radio host Lars Larson, Woods said shaking Obama's hand was "like shaking hands with a dead fish."

Woods said: "He kind of just mumbled, you know, 'I'm sorry.' His face was looking at me, but his eyes were looking over my shoulder like he could not look me in the eye. And it was not a sincere, 'I'm really sorry, you know, that you're son died,' but it was totally insincere."
Read more: http://www.foxnews.com/politics/2012/10/26/father-seal-killed-in-libya-says-clinton-vowed-to-arrest-and-prosecute/?intcmp=trending#ixzz2AWhxtBTH 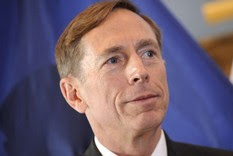 Breaking news on Benghazi: The CIA spokesman, presumably at the direction of CIA director David Petraeus, has put out this statement: "No one at any level in the CIA told anybody not to help those in need; claims to the contrary are simply inaccurate.”

So who in the government did tell “anybody” not to help those in need? Someone decided not to send in military assets to help those Agency operators. Would the secretary of defense make such a decision on his own? No. 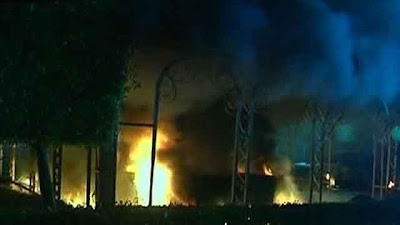 The CIA station chief in Libya reported to Washington within 24 hours of last month's deadly attack on the U.S. Consulate that there was evidence it was carried out by militants, not a spontaneous mob upset about an American-made video ridiculing Islam's Prophet Muhammad, U.S. officials have told The Associated Press.

It is unclear who, if anyone, saw the cable outside the CIA at that point and how high up in the agency the information went.

The Obama administration maintained publicly for a week that the attack on the diplomatic mission in Benghazi that killed U.S. Ambassador Chris Stevens and three other Americans was a result of the mobs that staged less-deadly protests across the Muslim world around the 11th anniversary of the 9/11 terror attacks on the U.S.

Those statements have become highly charged political fodder as the presidential election approaches. A Republican-led House committee questioned State Department officials for hours about what GOP lawmakers said was lax security at the consulate, given the growth of extremist Islamic militants in North Africa.

Posted by Max Solbrekken at 7:06 PM