Feticide, Infanticide, Baby Killing: What is this? And what comes next? I wouldn't want to be Barack or Michelle Obama or any abortionist, Clergyman or Lawmaker who legalized and promoted the Holocaust of the Unborn, on the Great Day of Judgment.!!! - Pastor Max Solbrekken 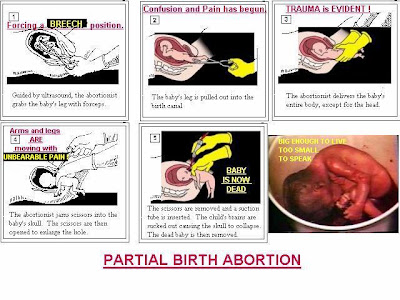 Are these the kind of people who should be making decisions about your life if the have no regard for the most helpless!

by Katie Pavlich
President Obama has a long and extreme record on abortion. I’ve reported here before about his comments that a baby is a “fetus outside of the womb,” his belief babies who survive abortion shouldn’t by law receive medical treatment and about his support of infanticide.
Now, LifeNews has published a letter signed by First Lady Michelle Obama in 2004, during Barack Obama’s U.S. Senate campaign, lobbying for partial birth abortion. From the letter:
We have all been concerned lately with the rise of conservatism in this country, especially as it relates to women. You’ve read the alarming news about the Justice Department’s request for hospitaals to turn over the private medical records of dozens of aptients. This cynical ploy is desinged to intimidate a group of physicians and force them to drop their lawsuit seeking to have the so-called partial birth abortion ban ruled unconstitutional.
The fact remains, with no provision to protect the health of the mother, this ban on a legitimate medical procedure is clearly unconstitutional and must be overturned.
You can read the entire letter here.

If you aren’t aware, the “so called partial birth abortion procedure” Michelle Obama supports, involves an abortion doctor stabbing a baby in the back of the head in an effort to kill him or her.
For further context, partial birth abortion typically occurs, as LifeNews mentions, in the middle trimester. With modern medicine, babies as young as 21 weeks are capable of surviving.
Read more at townhall.com

Posted by Max Solbrekken at 2:28 PM