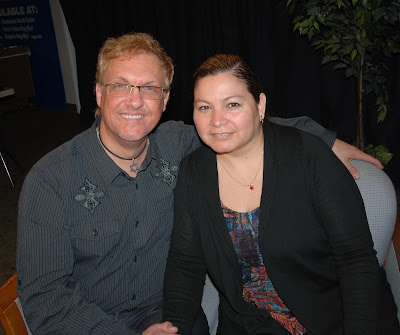 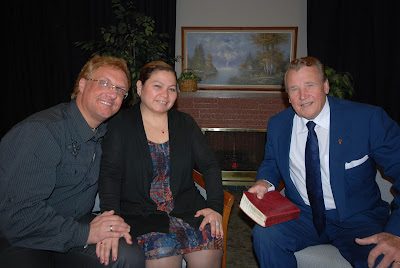 On October 11, 2012 Dean & Ruth Milley with
Pastor Max Solbrekken on the set of 'Come Home
To Jesus'TV Ministry soon to be released  in Canada.

On May 15, 1988 DEAN MILLEY was out-of-control on alcohol, drugs, stealing, perversion and suicide. He had written a suicide note to his mother before heading down the Trans Canada Highway planning to commit a highway suicide.

Instead, God led him to the Camp Emmanuel 7 miles from Lewisporte, off the Trans Canada Highway, where I was preaching to several thousand people at the Pentecostal (PAON) Conference. An estimated crowd of five hundred people were standing outside when Dean Milley entered the building.
General Superintendent Roy King had just finished interviewing the mother of a man who been carried into the meeting seriously ill a short time earlier. The nurse on the site was very concerned because his heartbeat was extremely low and falling and we were seven miles from a hospital. The man was stiff as a board, unable to speak even though his eyes were wide open.

After I prayed for Him in Jesus’ name he was instantly well and became totally normal and received Jesus Christ as his Saviour. Hallelujah. As Pastor Roy King handed me the microphone, I said:

"Stop the music and singing. There is a young man here who has made up his mind to kill himself, that this is his last day. Young man, you are planning to take your life as you have nothing to live for. If you will come to God's Holy Altar right now, He will deliver you from the power of Satan and forgive all your sins and give you His peace."

Dean pushed his way forward through the crowd (people were standing in the aisles) and fell at the altar. After a while preachers were calling, "Pastor Max, There is a demon possessed man on the floor. Come quickly."

About half a dozen preachers were praying for Dean as he writhed and bellowed like a bull. He eyes were almost popping out of his head, his face was purple, his throat was swollen and his tongue was v-shaped and darting in and out of his mouth like an automatic sword.

The Holy Spirit spoke to me and said: "He has a spirit of perversion. Cast it out in Jesus' name." I grabbed his head and said in a loud voice, "Upon the Authority of God's Word, by the BLOOD of the Everlasting Covenant, by the power of the Holy Spirit and in the name of Jesus Christ of Nazareth, Whose I am and Whom I serve, thou spirit of Perversion, Come out of this man now and never return!"

He bellowed like a bull and then his tongue stopped darting in and out and he totally relaxed. The tears gushed out and he sobbed and sobbed and began to worship Jesus Christ through his sobbing and tears. He stood to his feet with his hands raised to Heaven praising God and speaking in tongues.
Then he said, "I was raised in a Christian home, attended a Christian school & High School. I attended a Pentecostal Bible College for three years and no one knew I was suicidal, kleptamaniac, and a pervert. This is the first time I have known what it is like to be free!”
An amazing thing is that in 1967 while preaching at the Lewisporte  Pentecostal High School during the Altar Call I stopped and said, "If you won't do it for yourself, give your life to Jesus for the sake of your family, for your children."
Dean Milley's father was in that service and although he was deeply convicted of his sins, he had started to leave when he heard those words, "Do it for you Family".

Instead of leaving, he turned around to answer a Public Altar Call to give his life to Christ. Twenty-one years later his son Dean followed in his footsteps and today all his children are in the Christian ministry. Praise the Lord. I give Him all the praise, honour and glory. Great things He has done and is still doing. AMEN.
- Pastor Max Solbrekken

Canadian Missionary Dean Milley and his wife Ruth had worked together for 5 years in Lima Peru before deciding to marry.  Dean has been labouring in Lima, Peru for 12 years with the Youth in a large Church which has won 79,000 people to Christ in the 12 years he arrived there 12 years ago.

Ruth sets up Clinics in various areas of Lima, working with the Churches where she does Dentistry, Eye Examinations and psychological counselling together with Evangelistic meetings! Praise the Lord.

Posted by Max Solbrekken at 5:07 PM