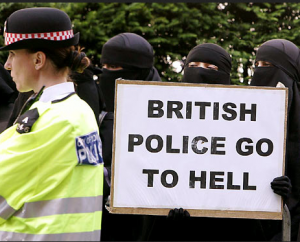 Aside From Spawning Terror, Muslim Sponges Costing The UK Crap Loads of Cash
By Clash Daily / 11 October 2012
British citizens are sinking under the weight of astronomical welfare costs, a majority of which go to Muslim immigrants, both legal and illegal, many of them Islamic extremists, and even more of them the large families of suspected and convicted Muslim terrorists.
Muslim Issue  Huge numbers of Muslims contribute nothing but live off the state. According to government statistics we spend a minimum £18 billion a year only to feed Muslims. And the majority of them don’t have even a basic College degree!
Daily Telegraph reported in 2012 statistics that 75% of all Muslim women are unemployed while 50% of all Muslim men are unemployed - rise from 13% for men and 18% for women in 2004.
Muslims are also on sick leave more than anyone else, with 24% of females and 21% of males claiming a disability (2001 figures). Muslims are the most likely among all religious groups to be living in accommodation rented from the council or housing association (28%); 4% live rent-free (2004 figures).
Money-wise it means that out of 5 million Muslims living in Britain (2012 demographics), 4.25 million Muslims, or 85%, live off tax payers. If we average this with the minimum benefit payment of £67 a week, at least £ 284,750,000 per week  (£1.1 billion per month) is spent from taxpayer money to feed and care for Muslims who don’t contribute anything whatsoever to Britain’s revenues.
Read more at barenakedislam.com

"How dreadful are the curses which Mohammedanism lays on its votaries! Besides the fanatical frenzy, which is as dangerous in a man as hydrophobia in a dog, there is this fearful fatalistic apathy.

The effects are apparent in many countries. Improvident habits, slovenly systems of agriculture, sluggish methods of commerce, and insecurity of property exist wherever the followers of the Prophet rule or live.

A degraded sensualism deprives this life of its grace and refinement; the next of its dignity and sanctity. The fact that in Mohammedan law every woman must belong to some man as his absolute property - either as a child, a wife, or a concubine - must delay the final extinction of slavery until the faith of Islam has ceased to be a great power among men.

Individual Moslems may show splendid qualities. Thousands become the brave and loyal soldiers of the Queen; all know how to die; but the influence of the religion paralyses the social development of those who follow it.

No stronger retrograde force exists in the world. Far from being moribund, Mohammedanism is a militant and proselytizing faith.

It has already spread throughout Central Africa, raising fearless warriors at every step; and were it not that Christianity is sheltered in the strong arms of science - the science against which it had vainly struggled - the civilization of modern Europe might fall, as fell the civilization of ancient Rome.”