As I see it, if God had not raised up Saul of Tarsus there would not have been a Church today. It is true that St. Peter did an amazing work among the Jews and many thousands were converted to Christ, however, the Jews faded out of the picture to allow the Gentiles to be grafted into the True Vine, Jesus Christ (Romans 11). Just ask yourself, "How many Jews are in the Church of Jesus Christ today? Not very many! God knows the End from the beginning and He knew that the Jewish Nation would reject Messiah Jesus and that the Gentiles would gladly receive Him as their Lord and Savior! That is why He commissioned Saul of Tarsus to reach the Gentiles. O' the wisdom of God is beyond understanding. Praise the Lord forever and forever. - Pastor Max Solbrekken

THE LAST SHALL BE FIRST: 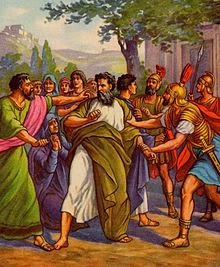 St. Paul: A Prisoner of Jesus Christ
"For we preach not ourselves, but Christ Jesus the Lord; and ourselves your servants for Jesus' sake. For God, Who commanded the light to shine out of darkness, hath shined in our hearts, to give the light of the knowledge of the glory of God in the face of Jesus Christ. For we have this treasure in earthen vessels, that the excellency of the power may be of God, and not of us." (2 Cor.4: 5-7)

After his dramatic conversion and the Lord's personal tutorage, Saul of Tarsus became a theologian of the highest degree, a  great visionary and strategist for the promotion of the Gospel of Christ. And among the most spiritual and humble of men!
He had been a self promoter and testified that he had, "profited in the Jew's religion above many of my equals in mine own nation."(Gal.1: 14) He had been a proud Pharisee but was brought to his knees in the dust when Jesus Christ arrested him! He wrote: "For we preach not ourselves, but Jesus Christ the Lord and ourselves your servants for Jesus' sake." He was now a servant of Jesus and his fellow believers!
His life was radically changed and he became consumed by Christ's Gospel. He states that Almighty God Who created the light in the beginning has dispelled the darkness in our hearts by sending Jesus Christ to this sinful world. The revelation of the Mystery of the Gospel that had been hidden in God was revealed to St. Paul!
He declared: "Whereof I am made a Minister, according to the dispensation of God which is given to me for you, to fulfill the Word of God: Even the Mystery which hath been hid from ages and from generations, but now is manifest to His saints. To whom God would make known what is the riches of the glory of this Mystery among the Gentiles; which is Christ in you the hope of glory." (Col.1: 26, 27)
WHAT DOES THIS MEAN? By faith every believer is baptized into the Body of Christ - which is the Church - by the Holy Spirit. The Bible states: "For by one Spirit are we all baptized into the body of Christ, whether we be Jews or Gentiles, whether we be bond or free; and have been all made to drink into one Spirit." (1 Cor.12: 13) Jesus Christ comes and lives in our hearts. He takes up residency in us!


CALLED AND CHOSEN!
As God created day and night by dividing the light from the darkness, Jesus Christ has illuminated our beings and forced out the darkness by residing within us through the Holy Spirit. The great Apostle declares, "We have this treasure in earthen vessels, that the excellency of the power may be of God, and not of us." Regarding Jesus Christ he states: "In Whom are hid all the treasures of wisdom and knowledge." (Col.2: 3)
The great 'Warrior of the Cross' reveals the doctrine of the 'Mystery' and his response to it: "I am Crucified with Christ: nevertheless, I live; yet not I, but Christ liveth in me: and the life which I now live in the flesh I live by the faith of the Son of God, who loved me and gave Himself for me." (Gal.2: 20)
JESUS made a statement that perfectly fits the life of St. Paul. He stated: "So the last shall be first and the first last, for many be called but few are chosen." (Matt. 20: 16). As an hate-filled enemy of Christ and a religious terrorist, Saul of Tarsus was the most unlikely candidate to spearhead the advance of the Gospel Message among the Gentiles and to effect the unbelievable expansion of the Church  across the known world!
He made a dramatic entrance onto the scene some time after Jesus had chosen His twelve Apostles and His seventy Disciples, and even after the outpouring of the Holy Spirit and the birth of the Church on the Day of Pentecost. He was definitely CALLED and CHOSEN by the Lord Jesus Christ Himself to lead the amazing and dramatic charge against the devil and his emissaries.
The founding of Churches, the organizing and training of Apostles, Prophets, Evangelists, Pastors, Teachers and Helps along with Bishops, across the Middle East, Asia Minor and Europe was a direct result of his MANDATE to make Christ known among the Gentiles!
ABOVE EVERY NAME THAT IS NAMED!
St. Paul wrote: "That the God of our Lord Jesus Christ, the Father of Glory, may give unto you the spirit of wisdom and revelation in the knowledge of Him: The eyes of your understanding being enlightened; that ye may know what is the hope of His calling and what the riches of the glory of His inheritance in the saints.
"And what is the exceeding greatness of His power to usward who believe, according to the working of His mighty power, which He wrought in Christ, when he raised Him from the dead, and set Him at His own right hand in the Heavenly places;
"Far above all principality, and power, and might, and dominion, and EVERY NAME THAT IS NAMED, not only in this world but also in that which is to come. And hath put all things under His feet, and gave Him to be the head over all things to the Church, Which is His Body, the fulness of Him that filleth all in all." (Eph.1: 17-23)
He stated: "But I certify you, brethren, that the Gospel which was preached of me, is not after man. For I neither received it of man, neither was I taught it, but by the revelation of Jesus Christ. For ye have heard of my conversation (life-style) in  times past in the Jews religion how that beyond measure I persecuted the Church of God, and wasted it.
"And profited in the Jew's religion above many of my equals in my own nation, being more exceedingly zealous of the traditions of my fathers. But, when it pleased God, Who separated me from my mother's womb, and called me by His grace, to REVEAL HIS SON IN ME, that I might preach Him among the heathen; immediately I conferred not with flesh and blood:
"Neither went I up to Jerusalem to them which were APOSTLES before me; but I went into Arabia, and returned again unto Damascus. Then after three years I went up to Jerusalem to see PETER, and abode with him fifteen days. But other of the apostles saw I none, except JAMES the Lord's brother.
"Afterwards came I into the regions of Syria and Cilicia; and was unknown by face unto the churches of Judaea which were in Christ: But they had heard only, That he which persecuted us in times past now preacheth the faith  which once he destroyed. And they glorified God in me." (Gal.1: 11-24)


TO REVEAL HIS SON IN ME!
The key to the importance of St. Paul's Ministry at the very beginning of the Christian Era is found here. He speaks about God 'revealing His Son in me'. When someone tells you about Christ he is revealing Him To you, but when Christ is revealed In you, He comes into you! Here is the huge difference between preachers who only know about Christ and those really KNOW Him intimately!
This great REVELATION helped to prepare St. Paul for the mammoth task that laid before him. A task that would bring him heartache, pain, beatings, scourging, imprisonment and martyrdom! A dyed-in-the-wool Pharisee who hated believers in Christ and also despised the heathen would become the Leader of the Church composed of mainly Gentiles.
The THREE YEARS Saul of Tarsus spent in Arabia prepared him for the task of Church building! His theology became Christ-centred as he pored over the Old Testament Scriptures and his spirit was on fire with passion, love and devotion to the Crucified One, whom he had once despised! Without doubt, our Saviour communed with him regularly, sharing with him the amazing Plan and Purposes of  the Church which He had purchased with His own precious BLOOD!
St. Paul writes: "If ye have heard of the dispensation of the Grace of God which is given me for you-ward: How that by revelation He made known unto me the MYSTERY (as I wrote afore in few words. Whereby, when ye read, ye may understand my knowledge in the Mystery of Christ)
THE ETERNAL PURPOSE OF GOD!
"Which in other ages was not made known unto the sons of men, as it is now revealed unto His holy apostles and prophets by the Spirit. That the Gentiles should be fellow heirs, and of the same body, and partakers of  His promise in Christ by the Gospel, whereof I am made a Minister, according to the gift of the grace of God given unto me by the effectual working of His power.
"Unto me who am less, than the least of all saints, is this GRACE given, that I should preach among the Gentiles, the unsearchable riches of Christ. And to make all men see what is the fellowship of the MYSTERY, which from the beginning of the world hath been hid in God Who created all things by Jesus Christ. To the intent that now unto the principalities and powers in Heavenly places might be known by the Church the manifold wisdom of God,
"According to the ETERNAL PURPOSE which He purposed in Christ Jesus our Lord: In Whom we have boldness and access with confidence by faith of Him...For this cause I bow my knees unto the Father of our Lord Jesus Christ, of Whom the whole family in Heaven and earth are named.
"That He would grant you, according to the riches of His glory, to be strengthened by might in the inner man; That CHRIST MAY DWELL IN YOUR HEARTS BY FAITH that ye being rooted and grounded in love, may be able to comprehend with all saints what is the breadth, and length, and depth, and height; And to know the LOVE OF Christ, which passes knowledge, that ye might be filled with all the  fullness of God.
"Now unto Him that is able to do exceeding abundantly above all that we ask or think, according to the power that works in us. Unto Him be GLORY in the Church by Christ Jesus throughout all ages, world without end. Amen." (Eph.3: 2-21)
WHO ART THOU LORD? WHAT