Anathema Maranatha is an exclamation of the Approaching Divine Judgment! Although our Lord is merciful, gracious, kind and loving, He is also the God of Truth and Judgment! In His great compassion He gave His Son to be the propitiation for our sins and our eternal salvation! God the Son was incarnated (God in human flesh) so that He could be judged in our place!

St. Peter wrote: “For Christ also hath once suffered for our sins, the just for the unjust, that He might bring us to God, being put to death in the flesh, but quickened by the Spirit.” (1 Peter 3: 18)

St. Paul stated: “To wit (that is) God was in Christ, reconciling the world unto Himself, not imputing their trespasses unto them; and hath committed unto us the Word of reconciliation. Now then we are ambassadors for Christ as though God did beseech you by us; we pray you in Christ's stead, be ye reconciled to God.

“Some question why St. Paul would insert, without translation, an Aramaic formula in a Greek letter to Corinth, where Aramaic was not current? No doubt it was because Maranatha was a FIXED and widely circulated formula. It was undoubtedly a key expression in the liturgy of the primitive Church in Palestine, and that from there it passed into Greek Christendom, without translation in fashion similar to “Amen” and “Hosanna”. - Selected

A DAY OF GLADNESS AND SORROW!

The word anathema (suspended) means that at the Coming of Christ, there will be a curse as well as a blessing. Those who have received Jesus Christ as Lord and Saviour will be blessed and those who have rejected Him will be cursed. Evil will have reached its zenith as Satan will be at fever pitch trying to stop the Kingdom of God. He and his kingdom will be destroyed forever!

Anathema was used as the church censure, the final excommunication. It was the religious curse of the Hebrews. Jesus will surely come to bless as well as curse.

Jude stated: “Beloved, when I gave all diligence to write unto you of the common salvation, it was needful for me to write unto you, and exhort you that you should earnestly contend for the faith that was once delivered to the saints for there are certain men crept in unawares, who were before of old ordained to this condemnation, ungodly men, turning the grace of our God into lasciviousness, and denying the only Lord, and our Lord Jesus Christ.

CONTENDING FOR THE FAITH!

“And Enoch also, the seventh from Adam, prophesied of these, saying, Behold the Lord cometh with ten thousands of His saints, to execute Judgment upon all and to convince all that are ungodly among them of their ungodly deeds which they have ungodly committed and of all their hard speeches which ungodly sinners have spoken against them.” (Jude 3,14,15)

Leaders of churches teaching that God is our Mother instead of Father are in error. Advocating that homosexuality is not sinful, when it is condemned in the Old and New Testaments is a serious departure from the Faith of Jesus Christ. Christian ministers who promote mixing pagan religions like Islam with Christ as a prophet only, are workers of Satan and will be judged as such!

JESUS stated: “I am the Way, the Truth and the Life: no man cometh unto the Father, but by Me.” (John 14:6); “I am the resurrection, and the life: he that believeth in Me, though he were dead, yet shall he live, And whosoever liveth and believeth in Me shall never die, Believest thou this? (John 11:25, 26)

Ordaining transgender clergy is a violation of the Holy Scriptures and the sinful departure from the purity of God! How can a sexual pervert declare the pure word of God and protect children from sexual perverts?

When Jesus returns there will be great joy in the hearts of those who love Him and are waiting for His appearing. For those who have rejected His invitation of mercy through repentance and faith, His return will bring a terrible sense perdition and sorrow!

I fear for unsuspecting believers today who are being led astray by 'ungodly men and women' who have kidnapped various Christian denominations.

May Almighty God send His Holy Spirit into His churches across the world to convict us all, pastors and parishioners, to flee from the wrath to come by crying out for mercy and forgiveness for our sins of mediocrity and coldness regarding the salvation of lost souls and lack of interest in the 'Soon Return of Christ'.

“If any man love not the Lord Jesus Christ, let him be cursed.” Why would St. Paul, the world's greatest theologian, make such a fearful and damning statement? Those words came by the blessed Holy Spirit from the mouth of one of the greatest former enemies of Jesus Christ and the Christian Faith.

Anyone who has studied the great truths of the incarnation of God the Son, His earthly Ministry, the atonement through His shed blood, His resurrection and ascension to the Father's right hand, would understand that God gave His best to save us! And anyone who would reject Him and His great love for us all, would understand that such a person does not want to saved.

Jesus stated: “He that is not for Me is against Me; and he that gathereth not with Me scattereth abroad. Wherefore I say unto you, All manner of sin and blasphemy shall be forgiven unto men: but whosoever speaketh against the Holy Ghost, it shall not be forgiven him, neither in this world, neither in the world that is to come.” (Matt. 12: 30-33)

Such a person has chosen to be Lost! JESUS stated: “For God so loved the world that, He gave His only begotten Son, that whosoever believeth in Him should not perish but have everlasting life. For God sent not His Son into the world to condemn the world; but that the world through Him might be saved.

HE HAS CHOSEN TO BE LOST!

“He that believeth on Him is not condemned; but he hath believeth not is condemned already, because he hath not believed in the name of the only begotten Son of God. And this is the condemnation, that light is come into the world, and men loved darkness rather than light, because their deeds were evil.” (John 3: 16-19)

“He was in the world, and the world was made by Him, and the world knew Him not. He came unto His own and His own received Him not. But as many as received Him, to them gave He power to become the sons of God, even to them that believe on His Name.” (John 1:1-4,11-13)

“Behold, what manner of love the Father hath bestowed upon us, that we should be called the Sons of God; therefore the world knoweth us not, because it knew Him not. Behold now are we the sons of God, and it doth not appear what we shall be: but we know that, when He shall appear, we shall be like Him; for we shall see Him as His. And every man that hath this hope in him purifieth himself, even as He is pure.” (1 John 3:1-3)

“Beloved, believe not every spirit but try the spirits whether they are of God; because many false prophets are gone out into the world. Hereby know ye the Spirit of God; Every spirit that confesseth that Jesus Christ is come in the flesh is of God:

“And every spirit that confesseth NOT that Jesus Christ is come in the flesh is NOT of God: and this is that spirit of Antichrist, whereof ye have heard that it should come, and even now is it already in the world.

Jesus of Nazareth was TRUE God from eternity together with God the Father and God the Holy Spirit. Through His incarnation, born of the virgin Mary, He became TRUE man, so that He could suffer, bleed and die for our sins and rise from the dead for our justification.

ON THE THIRD DAY CHRIST AROSE!

“Be it known unto you all, and to all the people of Israel, that by the Name of Jesus Christ of Nazareth, whom ye crucified, whom God raised from the dead, even by Him doth this man stand before you whole. Neither is there salvation in any other; for there is none other Name under heaven given among men, whereby we must be Saved.” (Acts 4: 10, 12)

“For this is good and acceptable in the sight of God our Saviour; Who will have all men to be saved, and to come unto the knowledge of the truth. For there is one God, and Mediator between God and men, the man Christ Jesus: Who gave Himself a ransom for all, to be testified in due time.” (1Tim. 2: 3-6)

“And without controversy great is the mystery of godliness: God was manifest in the flesh, justified in the Spirit, seen of angels, preached unto the Gentiles, believed on in the world, received up into glory!” 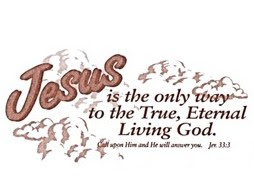 Posted by Max Solbrekken at 5:50 PM