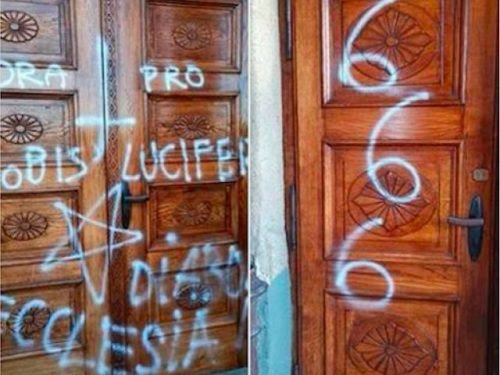 A Christian church in Goleszów, southern Poland was viciously vandalized last weekend by cowardly thugs who have yet to be identified.

On the doors of the church, the thugs crudely scrawled “Ora pro nobis, Lucifer,” Latin for “Pray for us, Lucifer,” around an inverted cross, an inverted star, the number 666, and the words for “church of the devil” in Latin.

The crime was committed last Saturday night and was not discovered until Sunday morning when the church sacristan arrived to prepare for mass.

According to Breitbart, Christian churches and other sites across Europe have suffered a record number of attacks. In 2019 alone, the outlet reports, “some 3,000 churches, schools, cemeteries, and monuments vandalized, looted, desecrated, or defaced.”

The Observatory on Intolerance and Discrimination Against Christians in Europe (OIDACE) noted in its 2019 report “a rise in the number of churches, Christian symbols, and cemeteries across Europe being vandalized, desecrated, and burned, compared to previous years.”

“Christians have been fired, sued, and even arrested for exercising their freedom of expression or conscience,” the watchdog group went on. “As we have noted in the past, Christians in Europe are not simply experiencing social discrimination, prejudice, or restrictions on freedom. Christians, including clergy, have been attacked or killed for their faith.”

The report also cited the French Interior Ministry’s official annual crime statistics for 2018, which included 1063 “anti-Christian acts” and demonstrated a 250 percent increase in such acts over the ten-year period from 2008 to 2018.

Posted by Max Solbrekken at 1:04 PM