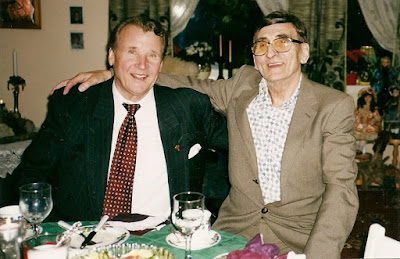 SHRINKING THE DEVIL
By Pastor Max Solbrekken, D.D.
"Blotting out the handwriting of ordinances that was against us, which was contrary to us, and took it out of the way, nailing it to His cross; and having spoiled principalities and powers, He made a show of them openly, triumphing over them in it." (Col. 2:14,15)
The picture that St. Paul was painting shows us what really happened to Satan and his kingdom when Jesus defeated him and his kingdom by His vicarious death and glorious resignation!
The analogy St. Paul uses is that of a great warrior returning victoriously with the enemy king running behind his chariot with his hands tied to a leash. His armour and crown is safely stowed in the victor's chariot.
Millions of people have lined the streets and shouting, "Long live our King, for he has conqoured and is victorious!"  This is what happened on Mount Calvary when Jesus of Nazareth defeated Satan by shedding His pure and sinless blood to free us from  Satan's grasp.Three world saw Jesus' victory: Heaven, Hell and earth! Heave
n rejoiced, hell shuddered in fear and multitudes on earth rejoiced and still rejoiced at His victory!
Jesus SPOILED all the power and authority of the fallen arch angel Lucifer over the human race! Jesus stripped Satan of his ability to run roughshod over God's greatest creation, man! The blood of Jesus DESTROYED Satan and his evil kingdom of darkness and death!
In due time, he will be  consigned to eternal torment in the Lake burning with brimstone and fire forever! His reservation has already been confirmed by the Lord Jesus Christ in His holy Word!
"And the DEVIL that deceived them was cast into the Lake of Fire
and brimstone, here the beast and the false prophet are, and shall be tormented day and night forever and ever." (Rev. 20: 10)
Posted by Max Solbrekken at 2:36 PM