How Atheists and Communists look after their dead. Brutal, inhumane and Insane. No wonder King David said: "The fool hath said in his heart, There is no God. They are corrupt, they have done abominable works, there is none that doeth good." (Psalms 14:1). The Gospel of Christ is the Only Hope to change the hearts of idiots, insane atheists and tyrants.- Pastor Max Solbrekken 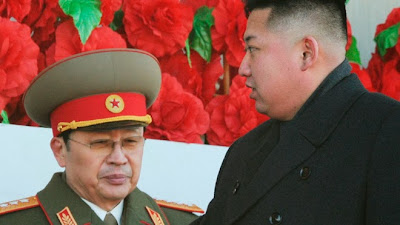 The execution of North Korean leader Kim Jong Un's uncle was more brutal than initially reported, according to a Beijing-controlled newspaper, which said the country's second-most-powerful figure was thrown into a cage filled with starving dogs and eaten alive.
The Singaporean Straits Times cited a report

from Wen Wei Po, a Beijing-control newspaper, that said Jang Song Thaek and five close associates were stripped and fed to 120 dogs that had not eaten for three days. The entire process, witnessed by 300 senior officials, lasted for about an hour, the report said. Fox News could not immediately verify the report.
Gordon Chang, the author of "Nuclear Showdown: North Korea Takes on the World,"

said he heard about the reports of Jang's brutal death back in early December. And although the reports are unconfirmed, Chang said "it is entirely possible" that Jang met his demise in the dog cage.

- Gordon Chang
"These deaths send a message that you better not cross the leader," Chang said. North Korea is known for its brutal killings. Chang said that Jang himself may have been responsible in the execution of a North Korean military colonel who was killed by a mortar shell.
Most political prisoners in North Korea are killed by a firing squad, Singaporean Straits Times reported. Kim’s reported departure from that method drew fresh rebuke from The Global Times, a Communist Party paper, which called the killing an example of backwardness of the regime. The editorial went on to urge Beijing to distance itself from the country.
To be sure, while the story is being widely reported, no major media outlets, including South Korean newspapers and China's People Daily, have confirmed it.
There are several reasons Beijing may have opposed the report on Jang's death. The Singaporean Strait Times reported that Jang was accused of selling cheap coal and precious metals to China. He was also accused of securing low commodity prices for Chinese businessmen.
Up until that point, Jang had been seen as the leading supporter of Chinese-style economic reforms in his country and an important link between Pyongyang and Beijing. But even before his death, China, North Korea’s only official ally, had suspicions about the direction North Korea went under Kim’s rule.
"The two countries' military have always had close ties," Chang said.
North Korea accused Jang, 67, of corruption, womanizing, gambling and taking drugs. It said he'd been eliminated from all his posts. Allegations heaped on claims that he tried "to overthrow the state by all sorts of intrigues and despicable methods with a wild ambition to grab the supreme power of our party and state."
News of Jang's execution was trumpeted across the nation by state media — with unusually vitriolic outbursts on TV, radio and in the main newspaper — as a triumph of Kim and the ruling party over a traitor "worse than a dog" who was bent on overthrowing the government.
Narushige Michishita, a security expert at the National Graduate Institute for Policy Studies in Tokyo, suggested that Jang's removal shows "that Kim Jong Un has the guts to hold onto power, and this might have shown his will to power, his willingness to get rid of anything that stands in his way."
The Associated Press contributed to this report
Posted by Max Solbrekken at 11:27 AM