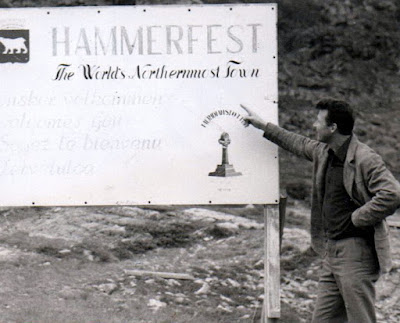 Many Were Shaken by God’s Word
North Norway Pentecostal Conference, 1968

Says Pastor Edwin Gabrielsen, interpreter
NARVIK had the opportunity to be the city chosen for the large Pentecostal Summer Conference in North Norway from July 29 to August 4 this year.
North Norway is the land of the midnight sun; however, because of cloudy and rainy weather the sun, which never sets during the summertime, was not even seen during the daylight.
Even though it was cloudy and rainy and dark outside, the meetings at the conference were full of joy, gladness, power, blessing and light, as the SON of God’s grace shone from a clear Heaven bringing healing under His wings. And this was a healing of a double sense as many were helped in their soul as well as their body.
God used Max Solbrekken, the main speaker of the Conference, for rich blessing for both the inner and the outer man. Night after night many came forward to accept Christ. This seemed to be very natural after the strong and anointed declaration of God’s Word that seemed to grip the hearts of the listeners. Many were shaken to their very foundation as Solbrekken with great power spoke against the unrighteousness of our times and called the sins by their proper names.
It is impossible to give a full account of the many who accepted Christ, but to give you a better understanding of the impact of this convention let me give you an example. The church building became far too small and so the large Folkets Hus Auditorium was rented. This large Auditorium is owned and operated by worldly people and the caretaker was also an unsaved man. He had suffered from a severe migraine headache for 16 years and had to use 200 pain killing tablets every month. As he watched Brother Solbrekken pray for the sick and God perform miracles he realized he also could be healed.
CUSTODIAN'S MIRACLE BROUGHT
HE AND HIS WIFE TO CHRIST!
As Brother Solbrekken prayed for him, he was instantly healed and in the evening service brought his wife to the meeting and the both came forward on the invitation and accepted the Lord as their personal Saviour. They were both so overcome with joy that they stood with tears streaming down their faces, with hands upraised praising God.
Many of the Ministers were strengthened, stirred and challenged to go forth in the power of the Holy Spirit to do a greater work for God, and when the Moderator of the Conference gave his farewell thanks to Brother Solbrekken, he said that the ministers had certainly learned much from him and that they felt the answer to keep the congregations clean was to preach a strong Holiness message as the Evangelist had done.
In the last service Brother Solbrekken asked all the Ministers to form two lines in which the sick and afflicted to pass, then the Ministers all, two at a time, laid their hands on the sick and prayed the prayer of faith for their deliverance. It was a glorious meeting, never to be forgotten.
ZION CHURCH IN STAVANGER STIRRED!
As Brother Solbrekken’s interpreter in the North Norway Pentecostal Conference, I also had the opportunity to witness the miracles of God in the great crusade in Stavanger in the month of June as well. Night after night the auditorium of Zion was overflowing. At this crusade also there were many who witnessed healing. Many scores streamed forward to the altars to be saved and many were filled with the Holy Ghost and joined the church.
This great Miracle crusade was also a new experience for many in Stavanger and a great joy filled our hearts as Pastor Kulsus, all the elders and the great crowds of people were 100% united with Brother Solbrekken, and as God brought the blessing. All over Norway, the doors are open for Max Solbrekken and we are praying and hoping that he will soon come back again as we are in a real need of such a servant of the Lord again and again!
Taken from Cry of His Coming Magazine, September, 1968
Posted by Max Solbrekken at 3:05 PM