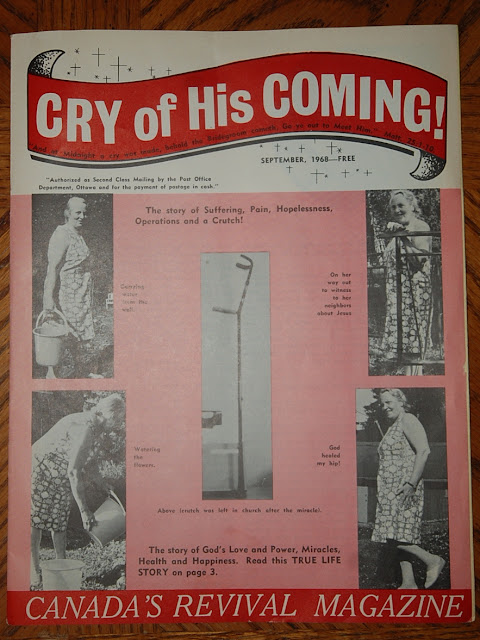 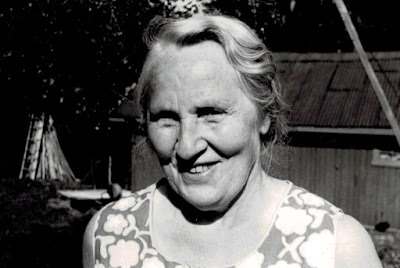 Mary Halversen filled with joy and love for God!

Jesus Christ Makes You Whole
Rise up and Walk!
Reported by O.J. Larring, Oslo, Norway. Taken from Cry of His Coming, Sept. 1968
Mary Halversen who lives on Grua Street in Hadeland, Norway had been an invalid for many years. Four years ago, she had to have an operation on her right hip because her hip socket was worn out and she could not walk any longer. Her left hip socket was in the same condition. She declined, however, to have it operated on because of all the extra pain, misery and suffering from the first operation. She decided she would wait for divine deliverance and a miracle.
.     It was with mixed feelings that I allowed the doctor to operate on my right hip four years ago. My right hip socket was at the time so worn out that I could not walk any longer, so I took the operation. By inserting an artificial socket, I was able to move my leg a little, but never be able to walk normally. Even to do any walking at all, a crutch became my constant companion, together with the companions of pain and suffering. I cannot describe the painfulness of those years, much of my sleep went from me during the night-time. It was especially during those times, that I called upon the name of the Lord and laid before Him my request for healing. At the throne of Mercy.
I had prayed much and read my Bible and I am sure that it was God that gave me the inward feeling that one day I would be healed. I could no longer do my housework, and had to have help at all times. I had always been an avid reader of Korsets Seier and was thrilled to read about the miracles that began to happen in Bergen and other cities under the ministry of Brother Max Solbrekken.
This gave me much great boldness to pray more, because I knew that if God was healing people in other parts of Norway, surely He would heal me, because He is no respecter of persons. On the 27th of June of this year some of my friends and came to ask me to accompany them to the large Filadadelfia Tabernacle in Oslo to hear Missionary Evangelist Max Solbrekken. I was grateful for the invitation and accepted.
IT WAS ALMOST AS A VOICE SPOKE TO ME!
When I came into the Auditorium and heard the songs that were sung and the powerful message of deliverance that was preached it was almost as though a voice said to me, “Jesus Christ makes you whole, stand up and walk.”  To explain how I felt at that moment is impossible, because it was that voice that had been encouraging me for these many years that was speaking to me now.
Oh, I thank God for the message that I was able to hear that night and when Brother Solbrekken was through preaching and had given the altar call, he asked for those who wee sick and had faith for healing to come forth to receive the power of the Gospel in the healing of their bodies.  There were many who came for prayer and be healed and finally I stood before Brother Solbrekken. God’s servant laid his hands upon me and prayed in the mighty name of Jesus and prayed for my healing – he then took the crutches away from me and said, “Jesus Christ makes you whole, rise and walk.”
Upon hearing that command, it became as natural for me to walk as to eat each day. I felt no current or strange feeling go through me, but faith filled my heart and before I knew it, all the pain was gone and I was walking down the aisle a healed woman. The crutch that had been my constant companion for all these years was left behind me in the church and now I can again do my own housework for  myself and my family.
My friends and many of my unsaved loved ones have received my testimony with joy and now must believe because they see, and because of what God has done in my life. I have been a Christian for
many years and can remember T.B. Barratt’s first time in meetings which he conducted in my home city.
It seems to me that it is longer now between the times and we are able to listen to faith’s message about God’s miracles and wonders in the earth. I would like to say to the preachers and to the ministers in God’s Kingdom – preach about God’s power in healing because the Ancient of Days is still alive and He is still as powerful as ever.”
Mrs. Mary Halversen is going about everywhere now in her neighbourhood, a walking miracle, telling all her neighbours and friends about what Jesus had done for her. O.J.L.
Posted by Max Solbrekken at 8:35 AM