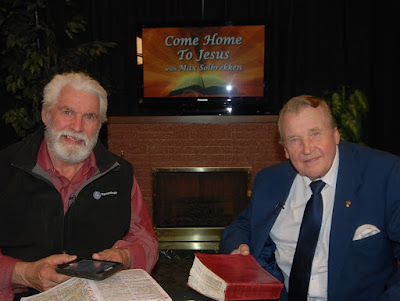 Pastors Max Solbrekken and Herve St. Denis discussing the Holy Scriptures in animated and anointed discussions on a variety of subjects on new Youtube Website 'Come Home to Jesus'. Tell your friends and neighbours.
JESUS CHRIST: THE SOLID ROCK!


By Pastor Max Solbrekken, D.D
“Jesus saith unto them, Did ye never read in the Scriptures, The stone which the builders rejected, the same is become the head of the corner; this is the Lord’s doing, and it is marvellous in our eyes? And whosoever shall fall on this stone shall be broken: but on whosoever it shall fall, it will grind him to powder.” (Matt.21: 42, 44)
After concluding His parable, Jesus warned of the judgment that would befall Israel if they rejected the Messiah. Their sin of rebellion would escalate until it involved deicide. They would brutally kill their Messiah, God’s Own Son!
Jesus quoted the Old Testament: “The stone which the builders refused is become the head stone of the corner. This is the Lord’s doing; it is marvellous in His eyes.” (Ps. 118: 22, 23);
“Therefore thus saith the Lord God, Behold, I lay in Zion for a foundation a stone, a tried stone, a precious corner stone, a sure foundation...” (Is. 28: 16)
After Christ’s death and resurrection, the disciples finally understood what had happened. The promised Messiah had died for the Jewish nation and for the sins of the whole world!
St. Peter stated: “Unto you therefore which believe He (Jesus) is precious: but unto them which be disobedient, the stone which the builders disallowed, the same is made the head of the corner. And a stone of stumbling, and a rock of offense, even to them which stumble at the word, being disobedient: where unto also they were appointed.” (1 Peter 2: 7, 8)
“This STONE which was set at naught of you builders, which is become the head of the corner. Neither is there salvation in any other: for there is none other name under heaven given among men, whereby we must be saved.” (Acts 4: 12)
Referring to the Red Sea, opening to save the  Jews from Pharaoh's advancing military, St. Paul compares that with water baptism. Their deliverance from Egyptian bondage is similar to our deliverance from Satan and sin. Their victory was celebrated as deliverance by water in the sea and ours is through baptism by immersion in water.
“And were all baptized unto Moses in the cloud and in the sea, and did all drink the same spiritual drink: for they drank of the spiritual Rock that followed them and that Rock was Christ.” (1 Cor. 10: 2-4)
Jesus warned that whoever falls upon that Rock (Himself), He will be broken, but whoever that Rock falls upon will be destroyed! God delights in saving those who have a “broken and a contrite spirit”. (Ps. 34: 18) God hates pride and arrogance!
The Roman Catholic Church has made a colossal mistake in their insistence upon rigidly holding to a number false and spurious doctrines that stand in flagrant violation of sound doctrine and basic common sense!
MARTIN LUTHER was charged with heresy by the corrupt Roman Church, for preaching the pure Gospel of Jesus. He was hauled in before the highest ranking body of civic and ecclesiastical rulers of the Church of Rome and the Empire. On April 18, 1521, at his trial at the Diet in Worms, Germany, he was asked: "Will you recant of your writings?"
LUTHER replied: "... Unless I am convinced by Scripture and plain reason, I do not accept the authority of popes and councils, for they have contradicted each other. My conscience is captive to the Word of God. I cannot and I will not recant anything, for to go against conscience is neither right nor safe! Here I stand. I cannot do otherwise! God help me. Amen."
The Bible says: “God resisteth the proud, and giveth grace to the humble. Humble yourselves therefore under the mighty hand of God, that He may exalt you in due time.” (1 Peter 5: 5, 6)

JESUS CHRIST GOD’S LAMB
WAS SACRIFICED FOR US!
On a church steeple high above the ground in Norway’s countryside, is a beautiful work of art. A lovely little lamb has been carved on the wood so it can be readily seen from ground level. When the church steeple was being built many years ago, a workman fell off a high scaffold to a certain death. His co-workers rushed down expecting to see a corpse.
Amazingly, the man was alive with only minor injuries. A flock of sheep had been passing by the church at the moment the young men fell. He landed on a lamb, crushing it to death! The lamb had saved his life!
That is what happened to Jesus. He was crushed for us! The prophet of God foretold it 700 years before it came to pass: “Yet it pleased the Lord to bruise Him: He hath put Him to grief…” (Is.53: 10) The Norwegian Bible says: “Det har behaget vår Herre til å knuse (crush) Ham.”
John the Baptist – the forerunner of the Messiah – pointed to Jesus our precious Saviour and stated unequivocally: “Behold, the Lamb of God which taketh away the sin of the world.” (John 1: 29)
St. John says: “And I beheld, and, lo, in the midst of the for beasts, and in the midst of the elders, stood a lamb as it had been slain, having seven horns and seven eyes, which are the seven Spirits of God sent forth into all the earth.” (Rev.5: 6)
Then he adds: “…the Lamb slain from the foundation of the world.” (Rev.13: 8) The Bible says that Messiah Jesus would be “brought as a lamb to the slaughter and as a sheep before her shearers is dumb so He openeth His mouth.” (Is.53:7)
“Surely, He hath borne our sicknesses (heb. khelee), and carried our pains (heb.makob): yet we did esteem Him stricken, smitten of God, and afflicted. But He was wounded for our transgressions, He was bruised for our iniquities: the chastisement of our peace was upon Him and with His stripes we are healed.” (Isaiah 53: 4-6)
ON CHRIST THE
SOLID ROCK I STAND
A Minister was preaching in London’s Hyde Park when a man began to heckle him. Being used to open air preaching, he continued undaunted. The heckler was still quite inebriated and was'nt going to stop.
He was agitated because he had been roused from a sound sleep. He was also ticked off because the preacher was a Protestant, while he was an Irish Roman Catholic!
“I’m from Ireland”, he boasted. “I can whip anyone of you here.” The preacher continued preaching about sin and salvation, heaven and hell and coming judgment! Finally, the drunken man shouted:
“What have to you to say about Ireland? What about the Shamrock, our very own Shamrock? What do you say about that Sir?”  The preacher turned toward the man and said: “On Christ the Solid Rock I stand. All other rocks are Sham Rocks.”  The writer penned these words:

WHAT IS ETERNAL LIFE?
“That which was from the beginning, which we have heard, which we have seen with our eyes, which we have looked upon, and our hands have handled, of the word of life; for the life was manifested, and we have seen it, and bear witness, and show unto you that eternal life; which was with the Father, and with His Son Jesus Christ.
“If we say that we have fellowship with Him, and walk in darkness, we lie, and do not the truth. But if we walk in the light, we have fellowship one with another, and the BLOOD of Jesus Christ His Son cleanseth us from all Sin.
“My little children, these things I writ unto you, that ye sin not. And if any man sin, we have an advocate with the Father, Jesus Christ the Righteous. And He is the propitiation for our sins, and not for ours only, but also for the sins of the sins of the Whole World. And hereby we do know that we know His commandments.
“Who is a liar but he that denieth that Jesus is the Christ? He is antichrist, that denieth the Father and the Son.
Whosoever denieth the Son, the same hath not the Father but he acknowledgeth the Son hath the Father also. Let that therefore abide in you, which ye have heard from the beginning. If that which ye have heard from the beginning shall remain in you, ye also shall continue in the Son, and in the Father.
“And this is the promise that He hath promised us, even Eternal Life. Ye are of God, and have overcome them, because Greater is He that is in you than he that is in the world.” (1 John 1:1-3, 6,7; 2:1-3, 22-25; 4:4)
WHAT IS TRUE GOD?
In His High Priestly Prayer, Jesus said: “Father, the time has come: glorify Thy Son, that Thy Son also may glorify Thee. As Thou hast given Him POWER over all flesh, that He should give Eternal Life to as many as Thou hast given Him.
“And this is Eternal Life, that they might know Thee the only True God, and Jesus Christ Whom Thou has Sent. I have glorified Thee on the earth: I have finished the work Thou gavest Me to do.
“And now O Father, glorify Thou Me with Thine own Self with the glory which I had with Thee before the world was.” (John 16:3-5)
While in exile on the Isle of Patmos, Jesus Christ our Risen Lord appeared unto John the Beloved: “And when I saw Him, I fell at His feet as dead.
“And He laid His right hand on me, saying unto me, Fear not; I am the first and the last; I am He that liveth, and was dead; and, behold, I am  alive for evermore. Amen; and have the keys of Hell and of death.” (Rev.1:17, 18)
After that awesome experience St. John writes: “And we know that the Son of God is come, and the whole world lieth in wickedness. And we know that the Son of God is come, and hath given us an understanding, that we may know Him that is True, even in His Son  Jesus Christ. This is True God, and Eternal Life.” (1 John 5: 19, 20)

LAST NIGHT AS I LAY SLEEPING A DREAM CAME TO ME.
I DREAMED ABOUT THE END OF TIME, ABOUT ETERNITY.
I SAW A MILLION SINNERS FALL ON THEIR FACE AND PRAY
THE LORD JUST SADLY LOOKED AT THEM AND THIS I HEARD HIM SAY:
SORRY, I NEVER KNEW YOU, I HAVE NO RECORD OF YOUR BIRTH.
SORRY, I NEVER KNEW YOU GO SERVE THE ONE THAT YOU SERVED WHILE ON EARTH.


WELL I SAW MY WIFE AND CHILDREN, I HEARD THEIR LOVING VOICE.
THEY MUST HAVE BEEN SO HAPPY, O HOW THEY DID REJOICE.
THEIR ROBES OF WHITE AROUND THEM, A CROWN UPON THEIR HEAD.
MY LITTLE GIRL LOOKED UP TO ME AND THIS IS WHAT SHE SAID:
DADDY, WE CAN'T GO WITH YOU, WE MUST DWELL IN THE JOY OF OUR LORD.
SORRY, BUT WE STILL LOVE YOU, BUT YOU'LL NEVER BE OUR DADDY ANYMORE.

AND THEN I AWAKENED, THE TEARS WERE IN MY EYES
AND LOOKING ALL AROUND ME AND THERE TO MY SURPRISE
THERE WAS MY WIFE AND CHILDREN, I KNEW IT WAS A DREAM.
SO KNEELING AT MY BEDSIDE YOU SHOULD HAVE HEARD ME SCREAM!
FATHER WHO ART IN HEAVEN, I KNOW YOU GAVE YOUR ONLY SON.
FORGIVE ME AND LET ME SERVE THEE, FOR I WANT TO BE READY WHEN HE COMES.

Posted by Max Solbrekken at 7:46 PM