The Bible states: "When the righteous are in authority, the people rejoice: But when the wicked beareth rule, the people mourn." (Proverbs 29:2); "Blessed is the nation whose God is the Lord." (Psalm 33:12) - Pastor Max Solbrekken 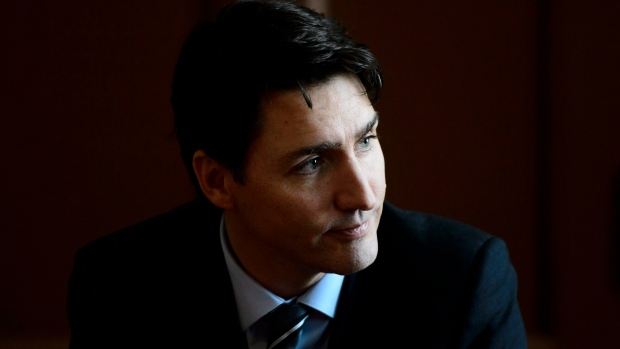 Prime Minister Justin Trudeau takes part in a round table discussion with
The Canadian Press in Ottawa on Monday, Jan. 15, 2018. (Sean Kilpatrick/
THE CANADIAN PRESS)

"This man is reprehensible," tweeted former White House staffer
Sebastian Gorka. The prime minister's suggestion that pro-life groups were
out of line with Canadian society triggered criticism in the country next door
-- where abortion remains a subject of mainstream political debate and is a
central issue in the struggle for control of the U.S. Supreme Court.
It's not the first time Trudeau has landed on the radar of the American right.
While he's drawn fawning profiles in mainstream magazines and polls have
suggested he's relatively well-liked in the U.S., there are three cases now
where he's drawn conservative ire down south, after his praiseful
eulogizing of Fidel Castro and the multimillion-dollar legal settlement
with Omar Khadr.
There were even a few boos at a Republican rally in Florida recently when
President Donald Trump mentioned Trudeau's name -- though the president
interjected quickly to silence them: "No, I like him," Trump said. "Nice guy.
Good guy."
The latest controversy involves a new Canadian policy -- when applying
for federal grants for student jobs, organizations are now required to sign
a form attesting that neither their core mission, nor the job being funded,
opposes human rights, including reproductive rights.
Pro-life activists are suing the federal government over it.
The abortion controversy produced a segment Monday on the morning
show "Fox and Friends".
Host Brian Kilmeade said: "What message is he trying to send to us,
maybe?" Co-host Rachel Campos-Duffy added: "What happens in Canada
often comes down to us. This is an effort to silence pro-lifers. ... This is a
sign of intolerance. If you have a pro-life view you're not welcome to share
it or else you're kicked out of this program."
They invited the head of largest American annual pro-life march onto to
the air to discuss it. Jeanne Mancini, whose annual March for Life is later
this week, said she hoped to invite the prime minister to attend the rally.
"Because he will see who's really out of touch with mainstream America,"
Mancini said. "We've lost over 60 million Americans to abortion. To the
prime minister, I  would just really want to talk to him."
Trudeau discussed the controversy in an interview Monday with The
Canadian Press.
He said he's a Catholic who has long had to reconcile his religious
beliefs with his responsibilities as a political leader and he said the
latter demands that he defend people's rights.
In this case, he said that means a woman's right to choose trumps the
right to a federal grant.
"An organization that has as its stated goal to remove rights from
Canadians, to remove the right that women have fought for to
determine what happens to their own bodies, is not in line with where
the charter (of Rights) is or where the government of Canada is,"
Trudeau said Monday.
"Certainly there is no obligation by the government of Canada to fund
organizations that are determined to remove rights that have been so
long fought for by women."
Posted by Max Solbrekken at 4:23 PM