Saskatoon StarPhoenix
Published on: January 7, 2018 | Last Updated: January 7, 2018 4:20 PM CST The Christ the Healer Gospel Church is pictured on the corner of Ave F and 21st street in Saskatoon, SK on Saturday, January 6, 2018. KAYLE NEIS / SASKATOON STARPHOENIX
Christ the Healer Gospel Church in Riversdale is welcoming a new leader after its pastor and owner Max Solbrekken gifted the building to his close friend and the leader of the TORO Ministries, Reverend Terry Severson.


Solbrekken, who has been leading the church for the last decade with help from his wife Donna, said he made the decision to gift the church because he knew Severson’s focus would be to grow the church by helping those living in the neighbourhood. He didn’t want to risk selling it to an organization that could potentially just be looking at making a profit. “I thought, I’ve got to turn this over to someone who can come and live (in the neighbourhood) because I could never find anyone that I could trust to really love the people,” he explained. “I didn’t want to pass it off to someone who would think, ‘OK, well, it’s not doing well. 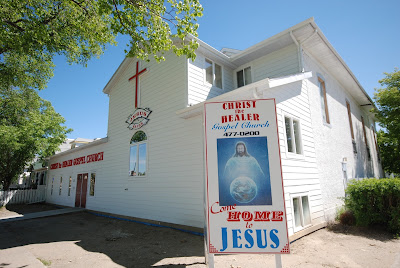 (financially) so let’s sell the building and we will get half a million dollars.’ ” His gift also included a donation of $20,000 to help get the church on a roll under Severson’s leadership. The transfer took place during a special New Year’s rally at the church on Jan. 1 — the date also marked his last day as pastor. Solbrekken knew Severson was the right choice for the job after seeing him find God after years of being an atheist. He says it’s a perfect fit for Christ the Healer thanks to the years Severson spent both living and working in what Solbrekken describes as “the roughest part of Regina.”
“He was growing leaps and bounds in the Gospel … I chose him because of his heart, because my desire is that the work grows — that the area becomes one of the best areas in Saskatoon,” he said. “He has got the desire and has a great group of young people working alongside him.”
The 84-year-old Solbrekken is well known thanks to his work as what some call a faith healer — though he said he doesn’t like that term and would rather simply be known as a believer — but he says he’s not ready for retirement quite yet. Instead, he has plans to publish books and utilize YouTube and radio to expand the reach of his message. He also has an offer to preach on multiple TV stations including one in his parents’ home country of Norway.


“I love preaching, but I also love teaching. I’m finding that a lot of these young ministers are saying, 'We need help' so that's my goal, just to help as many people as I can.”
Posted by Max Solbrekken at 4:05 PM