HEROES OF THE FAITH OF JESUS! 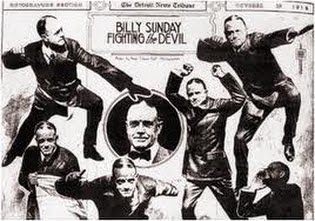 Above: Billy Sunday; Below: Billy Graham 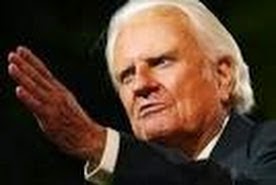 BILLY GRAHAM recently stated: "Yet, the more this world spirals out of control, my heart aches for America and its deceived people. Ultimately, we don't have a CRIME problem or a GUN problem. What we have is a SIN problem.
"And since we ordered God out of our schools and communities, the Military and public conversations, you know we shouldn't act surprised when all hell breaks loose."
As his great crusades were stirring Los Angeles in 1947, another Evangelical preacher criticized him, saying that Billy Graham was trying, "to set religion back 100 years", to which the 'Man of God' replied: "I did indeed want to set religion back not just 100 years, but 1900 years, to the Book of Acts, when First Century Followers of Christ were accused of turning the world upside down."
REASON FOR MY HOPE: SALVATION!

In his new book, the renowned Evangelist Billy Graham writes that the world is moving toward the end of the age! The signs Jesus gave us are being fulfilled all around us, declares the great Preacher!
"There’s a great deal to say in the Bible about the signs we’re to watch for and when these signs all converge at one place we can be sure that we’re close to the end of the age.
"And those signs, in my judgment, are converging now for the first time since Jesus made those predictions.”
Billy Graham said he is: “sounding the alarm for humanity to repent and turn from their sin … just as Noah did in ancient days. God keeps his promises, and this is why we can be sure that the return of Christ is near.”
The 94-year-old Evangelist said. “Scripture tells us that there will be signs pointing toward the return of the Lord. I believe all these signs are evident today.”

A NEW WORLD IS COMING!
Billy Graham wrote: "A new world is coming. The paradise that humanity lost in the Garden of Eden will be regained. Christ is coming to conquer evil and establish his perfect rule over all creation

“But until then God wants to give everyone an opportunity to know Christ through repentance and faith,” the Evangelist wrote. “Regardless of what society says, we can’t go on much longer in the sea of immorality without judgment coming. We are at a crossroads, and there are profound moral issues at stake. It is time to return to biblical truth.”
JESUS said: "Watch therefore: for ye know not what hour your doth come. But know this that if the good man of the house had known in what watch the thief had come, he would have watched, and would not have suffered his house to be broken up.
"Therefore be ye also ready: for in such an hour as ye think not the Son of Man cometh." (Matt.24: 42-44). Amen.
Posted by Max Solbrekken at 2:46 PM