The True Church of Jesus Christ has survived throughout 2,000 years and will continue to press forward against the powers of darkness until Jesus Christ our Lord and Saviour returns. - Pastor Max Solbrekken 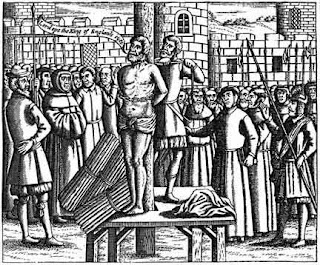 “Lord, open the King of England’s eyes!” cried William Tyndale at the stake this date in 1536 … just before he was strangled and burned.

“Translated the Bible into English,” reads Tyndale‘s epigraph; in the Protestant blossoming, this Herculean academic labor was also of itself a dangerous religious and political manifesto.
As with Martin Luther’s translation of the Bible into German, Tyndale’s English version threatened, and was intended to threaten, papal ecclesiastical authority. In undertaking the work, Tyndale defied the 1408 “Constitutions of Oxford”, an English clerical pact further to the suppression of the Lollards and kindred post-John Wycliffe heresies which expressly prohibited rendering scripture in the vernacular.
In Protestant hagiographer John Foxe‘s Book of Martyrs, a young Tyndale exasperated with a Romish divine memorably declared,
“I defy the pope, and all his laws;” and added, “If God spared him life, ere many years he would cause a boy that driveth the plough to know more of the Scripture than he did.”
Tyndale would give his life to, and for, that ploughboy. On the lam in Protestant Germany, Tyndale produced an English New Testament, and then an Old Testament, of startling poetry.
REVIEWING A PARTIAL HISTORY OF THE ENDURING POWER OF THE HOLY SPIRIT IN CHRIST'S CHURCH
By Pastor Max Solbrekken, D.D.
The Church of Jesus Christ has survived throughout 2,000 years and will continue to press forward against the powers of darkness, until Jesus our Saviour returns for His own. Early believers suffered under the Jewish Religous System in Jerusalem but they couldn't stop their former  Enforcer, Saul of Tasrsus, who met the Living Christ in a blinding light on the Damascus Road. The Roman Empire tried to crush the Church and tortured and killed countless thousands of believers in Yeshua Ha Maschiach, but they had to bow to Jesus Christ our Lord. When the Church was rich and powerful, it became the persecutor of the True Believers who wanted to cleanse the Church. Consequently, the Imposter Church in Rome killed millions during the Dark Middle Ages under the 'Bloody old Vatican Wolf' and his lap dog Emperors. Dr. Martin Luther was the first Protestant Prophet to  challenge the corrupt church and make his STAND FOR CHRIST and His Righteousness, without being killed. God protected him to lead the CHURCH back to God and Christ's Kingdom. Others like Savonarola, Jan Huss, Latimer, Riddley and Wycliffe were martyred by Satan's disciples! The Church suffered terribly under the murderous, cruel despots of the Arabian Peninsula and untold Believers in Jesus Christ were and are still being raped, kidnapped, starved and killed by pagan hordes. Millions more died at the bloody hands of Communist leaders like Lenin, Marx, Stalin, Mao! The Church of Jesus Christ, however, marches on. JESUS CHRIST stated: "I will build My Church and the gates of Hell shall NOT prevail against it." All Glory to God forever and ever. AMEN.
Posted by Max Solbrekken at 11:27 AM