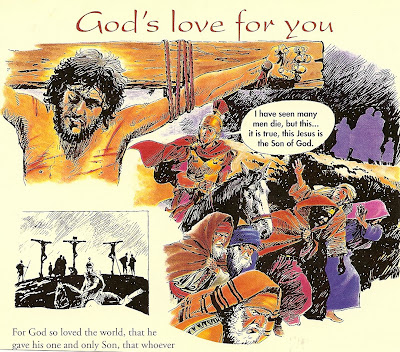 "
SUCH LOVE, SUCH AMAZING LOVE:       THAT CHRIST SHOULD DIE FOR ME!
By Pastor Max Solbrekken, D.D.
"For God so loved the world that He gave His only begotten Son, that whosoever believeth in Him should not perish but have everlasting life. For God sent not His Son into the world to condemn the world, but that the world through Him might be saved." (John 3: 16,17)
Martin Luther, the recognized leader of the Great Protestant Reformation was found lying under a crucifix weeping profusely, saying, "My God, my God...For me, for me.!!!
He had been reading  the Epistle to the Romans and it broke through into his spirit, that Jesus Christ, God's only begotten Son Who was in the bosom of His Father, had died for him personally!
That is why we need a personal Saviour. Nothing else will do! Religion, philosophy, philanthropy,   pilgrimages, good works, sacrifices, fasting, long prayers, meditations  and whatever else, does not satisfy God's holy wrath against rebellion and sin!
What was necessary was a Sinless One to shed His perfect and holy Blood to meet the demands of Divine Justice,  because the Almighty God declared, "The soul that sinneth shall surely die." (Gen 2: 15-17; Ezekiel 18:4 )
There were no 'sinless ones' among the sons of men for all were born in sin due to Adam's  transgression and momentous fall from innocence. He identified himself with Satan the enemy of God and thereby committed high treason!
God's LOVE for his renegade family of sinning men was the reason that His only begotten Son, who was in "the Bosom of the Father", would be incarnated (God in human flesh) so that He could pay the penalty for our sins and satisfy the Holiness and Righteousness of our Creator, Lord and Heavenly Father!
The Bible says: "Who is a liar but he that denieth that Jesus is the Christ? He is antichrist that denieth the Father and the Son. Whosoever denieth the Son, the same hath not the Father: but he that acknowledgeth the Son hath the Father also." (1 John 2: 22,23)
Again St. John writes: "And this is the record that God hath given to us ETERNAL LIFE, and this life is in His SON. He that hath the Son hath life; and he that hath not the Son of God hath not life." (1 John 5: 11,12)

WHAT WILL YOU DO WITH JESUS?
The Holy Scripture says, "The Father loveth the Son, and hath given all things into His hand. He that believeth on the Son hath everlasting life: and he that believeth NOT the Son shall NOT see life, but the wrath of God abideth on him." (John 3: 35, 36)
Our Lord Jesus Christ invites you to Himself, my dear friend. He says: "Come unto Me all ye who labour and are heavy laden and I will give you rest." (Matthew 11: 28)
Come to Him now and He will receive you. He has promised: "Him that cometh unto Me, I will in no wise cast out." (John 6: 37). Please receive Him now. Then, write and let us know the good news! Amen.
Posted by Max Solbrekken at 11:18 PM