"What do you need?" I asked."We NEED GOD", said Mary. I answered, "You have come to the right place." It wasn't long before we were all on knees before God! - Pastor Max Solbrekken 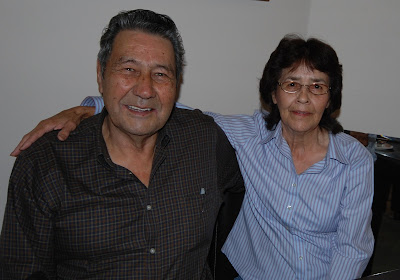 "And did all drink the same spiritual drink: for they drank of that spiritual rock that followed them: and that ROCK WAS CHRIST." (1 Cor. 10:4); "To whom coming as unto a Living Stone...Wherefore also it is contained in the Scripture, Behold I lay in Sion a Chief Corner Stone...the stone which the builders disallowed, the same is made the HEAD of the CORNER." (1 Peter 3-8); "For other FOUNDATION can no man lay, than that is laid, which is CHRIST JESUS." (1 Cor 3: 11).

We founded the Edmonton Revival Centre on 149 St and Stony Plain Road in Edmonton, Alberta on October 26, 1969.   Many great miracles began happening immediately. In 1970 Earnest and Mary Mountain were converted and filled with the Holy Spirit. During the next five years, Holy Ghost Revival swept Edmonton and area touching thousands for Christ and the Church.

The year of 1968 had been a year of amazing breakthroughs in the West Indies, Norway and Newfoundland. We witnessed amazing revivals ~ More than a month in Trinidad and Tobago was a genuine breakthrough, three and a half months across Norway and more than a month in Newfoundland.
BUY THE TIVOLI BALLROOM!
God had spoken to me in 1968 at the height of our greatest crusade in Canada that we should relocate from White Rock, BC and start a Church in Edmonton. Our good friends Dorothy and Bill Tanasiuk informed us that the Tivoli Ballroom was for sale.

We had had many glorious revivals beginning at the Alberta College the summer of 1962 when 95 souls received Jesus Christ and Lord and Saviour. After that God drew us back to Edmonton in auditorium meetings, and in Tent Crusades on Tower Road and Kingsway in 1964 and 1965. God performed marvellous miracles of conversion and divine healing when again hundreds came to Christ!

It was on a Wednesday morning in December, 1970 when Earnest and Mary walked more than 10 blocks to see me at the Edmonton Revival Centre. They had seen the billboard, 'GET RIGHT WITH GOD' and realized their lives were a mess. They had been living in a common law relationship with four children. Earnest was bound by alcohol and had lost his driver's license.
I'M COMING WITH YOU!
A brand new automobile was parked in front of his house but he could not drive it. He and Mary were planning to separate when God began speaking to Earnest's heart. Earnest put on his jacket and began waling out the door. Mary asked, "Where are you going?" He answered: "I'm going to see that preacher whose picture we saw on the billboard with the words, 'Get Right With God!'  Mary said, "I'm coming with you!"

They walked ten blocks  in silence until they came to the Church. When my secretary brought them into my office, I asked them: "What can I do for you? Do you need food, clothes, help?" Mary blurted out, "We need God!" I said: "You have come to the right place. Please sit down."

Then I opened to them the Holy Scriptures about our wonderful Saviour Jesus Christ, Who had left Heaven's glory to die in our place in order to redeem us from the powers of darkness and the devil, and to take us unto His Kingdom and the Family of God!

We all fell to our knees and the hot tears flowed from our eyes as they confessed their sins and received Jesus Christ as their personal Saviour! When we rose from our knees they had become new creatures in Christ Jesus (2 Cor.5: 17). A short while later, I had the privilege of solemnize their wedding vows in Jesus' Name, with their four children as witnesses, as well as newly converted Allan and Mary Thew. (Mary's aunt & husband)
SOLID LIKE A ROCK FOR JESUS!
All these years, Earnest and Mary Mountain have stood true to Jesus Christ and bringing their children to Christ. God's blessings have been upon them and their children  for which we praise God! Amen
Posted by Max Solbrekken at 2:55 PM