ARAB SPRING WAS TROJAN HORSE. PRAY FOR THE CHRISTIANS OF THE MIDDLE EAST TO SAVE THEM FROM THE DOGS OF HATE.!!! - Pastor Max Solbrekken 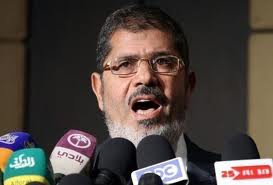 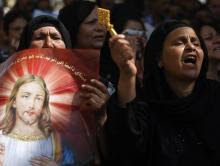 CAIRO (AP) - Coptic Christian families have fled their homes in a town in Egypt's Sinai Peninsula, fearing for their lives after receiving death threats from suspected Islamic militants, a local priest said Thursday.
Father Youssef Sobhi said that Islamic militants dropped leaflets on the doorsteps of shops owned by Copts in the city of Rafah near the border with Gaza and Israel, ordering them to leave town within 48 hours and making an implicit warning of violence if they failed to do so. Two days later, masked militants on a motorcycle opened fire on one of the shops before speeding off, Sobhi said. No one was hurt in the shooting.
When Christians met Tuesday with the province's top government official, who was recently appointed by Egypt's new Islamist president, Mohammed Morsi, the governor promised to facilitate the Copts' move to the nearby city of el-Arish but did not offer to protect the community to ensure that it stayed in Rafah, according to the priest.
"I was shocked at the governor's response," Sobhi said. "This is simply displacement by the government's consent."
An Egyptian intelligence official confirmed that a number of Coptic families had fled Rafah because of a militant threat. Another security official denied the reports and said that no Christians were forced to leave. Both officials spoke on condition of anonymity because they are not authorized to brief the media.
It was not exactly clear how many Christians have left the town, but Sobhi said that the number of Copts in Rafah had dwindled from 14 families to two since the uprising that pushed longtime autocrat Hosni Mubarak from power in February 2011.
A first wave left Rafah after the only church in the town, The Holy Family Church, was looted, torched and destroyed in several militant attacks over the past year. The church is built on the site where Christians believe the Holy Family first stopped to rest after crossing into Egypt.
Sobhi was in the first group of Christians to flee, although he returns frequently to Rafah check on his parish.
Mamdouh Nasef, the Coptic shop owner who recently came under attack, said that his Muslim neighbors are urging him to stay and pledging to protect him.
"They can't guard me 24 hours a day, and I fear for my children," Nasef said by telephone. "My children were born here and Muslims here are like my brothers."
Nasef is still in Rafah, but plans to return to his hometown in southern Egypt.
There have been incidents of sectarian violence in Egypt in the past. In July, in the village of Dahshour south of Cairo a Muslim mob torched Christian homes and shops and damaged the local church, forcing many Coptic families to flee the village. The violence was sparked when a personal dispute swelled into violence and a Muslim man died.
In Sinai, the threats against the Christians, who are estimated at around 10 percent of Egypt's population of 85 million, are a symptom of the broader lawlessness that has hit the peninsula since the popular uprising ousted Mubarak. Since then, security has deteriorated across Egypt, particularly in Sinai where heavily armed Islamic groups have exploited the security vacuum to wage attacks on police stations and call for the establishment of an Islamic state.
Militants from Rafah, along with those from the neighboring Gaza Strip who cross into Sinai through an elaborate network of underground tunnels, have also waged cross border attacks into Israel. In one of their most recent strikes, masked militants killed 16 Egyptian soldiers near the border in early August.
Under Mubarak, Christians complained of discrimination from the government, which did little to prevent attacks on the community by hardline Muslims. Many Christians fled to the United States and other Western countries, and tensions have risen since Mubarak's police state has given way to a state of lawlessness.
With the election of the country's first Islamist president, Mohammed Morsi of the Muslim Brotherhood, many Christians have grown increasingly concerned about their place in Egypt.
Those worries only deepened after Egyptian Coptic Christians in the United States posted a 14-minute clip entitled "Innocence of Muslims," which denigrates Islam and the Prophet Muhammad, portraying him as a womanizer, a fraud and a child molester. The film has sparked angry protests across the Muslim world as well as attacks on U.S. embassies, including one in Libya that killed the U.S. ambassador and three other Americans. The wave of protests began in Cairo, where demonstrators breached the walls of the U.S. Embassy.
Also Thursday, an Egyptian court has upheld a six-year jail sentence for a Coptic Christian school teacher convicted of insulting Islam and the country's Islamist president in postings on Facebook.
Egypt's MENA state news agency says a court in the southern province of Sohag agreed with a lower court ruling that found Michelle Bishoy, also known as Bishoy el-Behiri, guilty of blasphemy after posting pictures that were deemed offensive to Islam's Prophet Muhammad. The court also upheld Bishoy's conviction on charges of insulting Egyptian President Mohammed Morsi.
Thursday's ruling can be appealed.
The case is the second this month in which a Coptic Christian has been detained for posting material considered anti-Islamic on social networking sites.