It is really not fair except in politics: Pitting two real MEN against a young activist Amateur and an old political hack & Buffoon. May the best men win! - Pastor Max Solbrekken 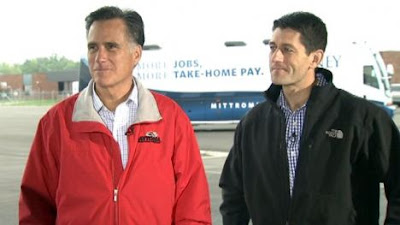 Canadian View: No comparison between real men & political hacks
Romney: Obama yet to 'level with the American people' about Libyan attack
Published September 26, 2012
FoxNews.com
·
Mitt Romney, in a joint Fox News interview with running mate Paul Ryan, accused the Obama administration of failing "to level with the American people" about how the U.S. Consulate in Libya was attacked, leaving the U.S. ambassador and three other Americans dead.
"Look, we expect candor from the president and transparency, and he continues to refuse what is said by the other members of his administration: This was a terrorist attack. We were attacked apparently by Al Qaeda and it is a very troubling development," Romney said during a campaign stop in Ohio.
Romney's comments underscored complaints made by Republican lawmakers, who question the administration's shifting explanation, starting with claims that the Sept. 11 strike was "spontaneous" violence tied to protests over an anti-Islam film produced in the U.S. Obama officials gradually walked back that description, and Obama acknowledged Monday that it clearly "wasn't just a mob action" -- though he did not go as far as to call it a terrorist attack.
One of Obama's advisers, National Counterterrorism Center Director Matt Olsen, was more direct last week, testifying to Congress that the four Americans "were killed in the course of a terrorist attack."
"When the director of the Counterterrorism Center comes to Congress and testifies and says that this is a terrorist attack ... I think you would want to ask that question of the president, why he is not on the same page with his own administration officials?" Ryan said.
Obama devoted much of his address Tuesday to the United Nations General Assembly to the attack in Libya and unrest in the Mideast. He paid tribute to Ambassador Chris Stevens, who died in the attack, recalling Stevens' time serving in the Peace Corps as an English instructor in Morocco.
"Chris Stevens embodied the best of America," Obama said.
The president went on to restate his administration's support for the Arab Spring, calling it a "season of progress." But he said the recent violence and unrest is indicative of the difficulties along the way. "True democracy -- real freedom -- is hard work," he said.
The president, however, did not mention terrorism in his U.N. speech, and he has yet to elaborate on how extremists were able to launch what now appears to have been a coordinated attack on the consulate. Obama and others in his administration have been criticized by Republicans for not taking a more definitive stance on the attack.
Obama, in an interview taped Monday on ABC's "The View," condemned extremist elements in the Muslim world and vowed the U.S. is "not going to shrink back from the world because of this."
"We are going to hunt down those who did this," he said. "We will bring them to justice."
He also said in the interview, which aired Tuesday, that there was "no doubt" that the assault "wasn't just a mob action" but a sign of extremism in nations lacking stability. "What's been interesting, just this past week, there were these massive protests against these extremists militias that are suspected, maybe, of having been involved in this attack."
In interviews and at campaign events Monday, Romney assailed Obama's leadership abroad, leading a chorus of Republicans in criticizing the president for what they said was minimizing the death of the Ambassador Stevens. Obama, in an interview with CBS' "60 Minutes," said recent violence in the Mideast was due to "bumps in the road" on the way to democracy. Romney on Monday also suggested Obama was leaving American foreign policy at the mercy of events instead of working to shape global politics in America's interest.
Fox News' Carl Cameron contributed to this report.