' THE FORGOTTEN MAN ' is a picture of the common man who is left frustrated as the wheels of Big Government leave him out of the picture, after they have made their speeches promising everything and anything to to get elected and do the exact opposite. In Jeremiah 5:1 we see how Almighty God seeks after honest men, leaders who are not perverted, tainted or jaded. He offers these words to such a man: "Run ye to and fro, through the streets of Jerusalem, and see now, and seek in the broad places thereof, IF YOU CAN FIND A MAN, if there be any that seeketh judgment, and SEEKETH THE TRUTH; and I will pardon it." If God could find an honest man who didn't bow to the homosexual lobby, the abortion lobby, the Islamist lobby, the loose living, drug taking, immoral, kinky Hollywood Crowd and the thousands of corrupt lobbyists, He would pardon sin-laden Washington and bless America! Shall we Pray: "Almighty God in Jesus Christ's name, may Your Blessed Holy Spirit search out the land and raise up another Abraham Lincoln, Daniel Webster, D.L Moody, Jonathon Edwards, David Brainerd or Charles G. Finney - Pastor Max Solbrekken 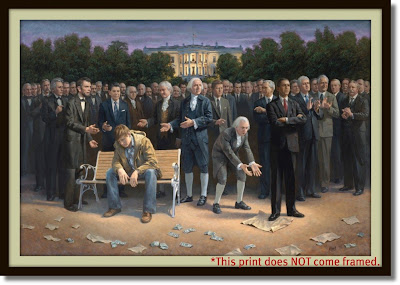 Is the Obama Campaign Collapsing and Liberalism With It?
May 22, 2012 byGary DeMar

Don’t underestimate liberals. They live for politics. It’s their religion. They will lie, cheat, and steal to win an election.

Prime evidence of their chicanery is the fact that the voting rolls are bloated with illegal immigrants and dead voters.

“There are questions about whether 182,000 registered voters are actually US citizens and the names of more than 50,000 dead people were discovered on Florida’s voter rolls.”

Then there is liberal opposition to voter ID laws. I wonder why? I know, so vote early, vote dead or alive, and vote often can become reality.

Even so, there seems to be some cracks in the foundation of liberal unity. Liberals rarely criticize other liberals. This is beginning to change as the following examples show.

Black ministers are speaking out against President Obama’s support of homosexual marriage even though the NAACP has gotten behind the President on the issue. Righteousness is beginning to trump political expediency. Maybe these same Black ministers will come to realize that liberal economic policies have failed as well.

The Catholic Church traditionally lean Democrat. The abortion and contraception dustup is changing some minds. “Warning that ‘fundamental rights hang in the balance,’ 43 Catholic dioceses and apostolates have filed lawsuits arguing that the mandated coverage of contraception in health-care plans is unconstitutional.” This is a good sign.

Booker’s comments came on the heels of those from Steven Rattner, who headed the president’s auto task force and last week called “unfair” an Obama campaign ad about a Kansas City, Mo., steel mill that was taken over by Bain in 1993.

“I don’t think Bain Capital did anything they need to be embarrassed about,” Rattner said May 14 on MSNBC’s “Morning Joe” program. “It did it superbly well, acting within the rules, acting very responsibly, and was a leading firm.”

Don’t think these Democrats all of a sudden got some scruples. They know that campaign donations come from people with money, and that includes equity firms. Democrats are seeing their campaign coffers a little light these days.

Naturally, Booker was taken to the Democrat woodshed for his comments. He strayed from the liberal plantation a bit too far.

Entertainers are starting to turn on President Obama. Penn Jillette, of the magic team Penn and Teller, has taken on the President for his class warfare rhetoric, hypocritical drug policy, and states’ rights cop-out.

Comedian and actor Jon Lovitz (the cigar-chomping scout in A League of their Own and SNL alumnus) got the ball rolling with his rhetorical attack on the president by describing him as “a ***** ***hole’ for ‘saying the rich don’t pay their taxes.’”

He also “took issue with Obama’s recent fundraiser with George Clooney that raised $15 million for his campaign.” He called the move “hypocritical” since the President has spoken out against rich Americans for not paying their “fair share of taxes.”J

While the Jewish Lovitz has been attacked as a “Nazi” for his anti-Obama comments, “he has been offered book, TV and movie deals in the wake of his comments because ‘what I said was right.’” Time will tell if he is forced to apologize under threat of never working in Hollywood again.

Don’t get me wrong. A few dissident Democrats attacking their party does not make a funeral. I don’t want to be like James Carville who wrote 40 More Years: How Democrats Will Rule the Next Generation in 2009 and had to eat crow in November of 2010.

We still have to contend with a squishy Republican Party that does not know how to fight and never met a compromise it didn’t like. Even so, the loss of Mr. Compromise himself, former Sen. Richard Lugar, gives me some hope.