Happy Mother's Day: Abraham Lincoln stated, "All that I am, or hope to be, I owe to my angel mother. I remember my mother's prayers and they have followed me. They have clung to me all my life." - Pastor Max Solbrekken 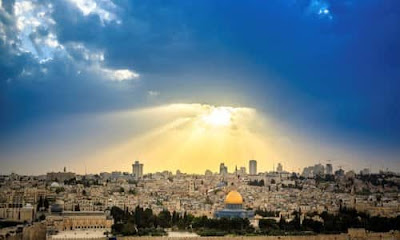 In the past 70 years, no single country's stock has risen faster or farther than the State of Israel. Once a resource-poor, existentially endangered nation-state comprised of refugees from post-Holocaust Europe and Muslim countries throughout the Middle East and North Africa, Israel has emerged into a world economic, military and diplomatic superpower.
In just one week, Israel's elevated status is being put on full display, in no small part due to the unlikely and oft-polarizing duo of U.S. President Donald Trump and Israeli Prime Minister Benjamin Netanyahu.

While announcing America's exit from the flawed Iran nuclear deal--officially the Joint Comprehensive Plan of Action, or JCPOA--Trump's direct reference to Netanyahu's publication of incontrovertible evidence exposing the full nature of Iran's sophisticated nuclear-weapons program places Israel at the center of policymaking in the free world.
Just prior to Trump's speech, it was reported that Israel had briefed at least 22 nations on the full contents of the documents, photos and simulations daringly confiscated by Israel's Mossad, clearly signaling that Israel's intelligence is among the best in world. Following Trump's speech, it became clear that Israel's analysis of Iran's nuclear program and the nuclear deal now defines and supports America's policy.
In the hours after Trump announced America's withdrawal from JCPOA on May 8, a large explosion occurred at an Iranian weapons depot outside of Damascus, with reports of yet another alleged Israeli airstrike into foreign territory that penetrated its targets, despite the presence of Russian missile-defense systems in Syria.
Just a few years ago, leading up to the signing of the JCPOA in 2015, Israel was a pesky obstacle to the deal that was supposed to be the crowning foreign-policy legacy of the Nobel Peace Prize-winning President Barack Obama. At the time, Netanyahu obstinately delivered an impassioned speech before Congress opposing the deal, angering Obama, the Democratic Party, the international community and liberals at large.
Yet with Trump's exit from the deal, which he noted during his speech on Tuesday "failed to make the world safer," it now becomes clear that Netanyahu's views have prevailed. Jerusalem's position and Washington's position have aligned to dictate a new international policy towards Iran, the world's leading state sponsor of terror.


With close to nothing to show for its investment in Israel's destruction, Hamas now resorts to sending "flaming kites" into Israel in the hopes of starting brush fires in Israel's south.
In the West Bank, the P.A. has been exposed as a corrupt kleptocracy--led by aging autocrat Mahmoud Abbas who is now in year 13 of a four year term--hell-bent on inciting and incentivizing the murder of Jews. The P.A. is perhaps as far away as ever from the creation of a Palestinian state in the disputed Israeli territories.
Just last month, the United States passed the Taylor Force Act designed to withhold international aid to the P.A. if it continues its sophisticated practice of making payments to jailed terrorists and the families of terrorists killed in the act of murder.
Rather than comply with the regulations of the Taylor Force Act, the P.A. continues to pay terrorists, and has simultaneously ended all communication with the U.S. government over its official recognition of Jerusalem as Israel's capital. In just a few weeks from now, U.S. aid to the P.A. will end, likely igniting a fiscal crisis.
Israel this week advanced its equivalent of the Taylor Force Act through a first reading in Knesset. The law is intended to offset monthly transfers of taxes and tariffs collected by Israel on behalf of the P.A. at Israeli ports. A sum equivalent to nearly two months of the Palestinian annual budget will be withheld should Israel pass its version of the law.
As Israel celebrates its 70th anniversary and the official recognition of Jerusalem as its nation's modern capital, Palestinians will commemorate the nakba, or "catastrophe," on May 15 as a result of the founding of the Jewish state.
Just days after the nakba, Palestinians will begin celebrating the Islamic holy month of Ramadan, a period during which too many Palestinians in recent years have observed the modern jihadi traditions of attempted murder via car-rammings, knife-stabbings and suicide-bombings.
Yet perhaps this year, if aspiring martyrs realize that they and their families may no longer receive the financial compensation promised for terror, and that those acts are doing little to no damage to the existence of a strengthening Jewish state--even as they sometimes succeed in taking a handful precious Jewish lives--they may begin to recognize that the only way they stand to benefit is by ditching their anti-Israel activity and by aligning with Washington and Jerusalem.
Jerusalem historically has been a city of epic highs for the Jewish people, as well as challenging lows.  We may yet see more difficult times ahead for Israel's oft-embattled capital city.  Yet at the present, all indications are that Jerusalem is rising.
Originally published at JNS.org - reposted with permission.


Send the donation to:   [email protected]
Posted by Max Solbrekken at 8:29 PM