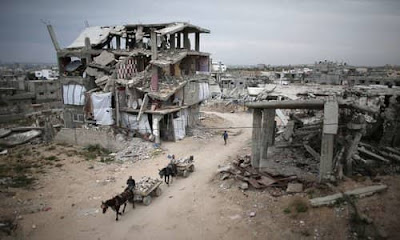 As Hamas continues to exploit protests to foment violence against Israel, finding a way to help the people of Gaza in any meaningful way becomes more and more challenging. All parties interested in bringing change to Gaza need to face the reality that Hamas has failed its own people.

A New York Times article titled "Plan to storm fence gets bloody preview in Gaza," by Iyad Abuheweila and David Halbfinger, is one of several recent reports that have started to capture more accurately the reality of Gaza, why the people there are suffering, and what these so-called protests are really about.

As with so many issues with the Israeli-Palestinian conflict, things are not black and white.

The article does not shy away from hard facts. The authors describe Israeli concerns about "the idea of swarming across the barrier, a mass of tens of thousands of people too numerous for Israeli soldiers to arrest or even to shoot."

They cite an Israeli colonel's explanation that the protesters are "trying to infiltrate into Israel, damage our infrastructure and kill Israelis," and that Hamas leader Ismail Radwan urged protesters not to fear death, but instead to welcome martyrdom. For additional context, let's not forget that another leader, Yahya Sinwar, exhorted protesters on April 6 to "tear down the wall and tear out their [Israelis'] hearts."

The April 27 New York Times opinion piece titled "Why I March in Gaza," by Abu Shammalah, is an instructive contrast to the Abuheweila-Halbfinger article. This op-ed has touching aspects - written by a father who says he cherishes his life, speaks about his precious children and his wife.

But he also describes the protesters as unarmed, when many are actually armed. And his characterization of the protests as nonviolent ignores the protesters who are quite violent. An inspiring description of how "kites flew" toward the fence must be balanced by pointing out that petrol bombs and swastikas were attached to some of those kites.

Many blame Israel, Egypt and/or the Palestinian Authority for the situation in Gaza. Too few, however, focus their criticism on Hamas, which has been the de facto ruling entity of Gaza for a decade.

Let's get real about this: Hamas, and its enablers, such as Iran, are squarely to blame for the desperate situation in Gaza. Hamas has consistently put its own destructive priorities above those of Gaza's weary and increasingly desperate population.

The Israelis have indicated that they want to do more to help the people of Gaza, if they could be assured that additional things they allow into Gaza will not be repurposed into weapons or used to build tunnels to attack Israel. Israel might choose to ease restrictions on travel if it could be assured that those who are crossing into and through Israel will not commit acts of terror or be smuggling weapons or cash to be used for terrorism.

Egypt could also do more to help the people of Gaza, but Egypt shares the same legitimate security concerns as Israel. President Mahmoud Abbas and the Palestinian Authority could restore all salaries and payments in Gaza. But Abbas also has legitimate concerns, even if the steps he has taken are unfortunate and damaging.


Deep and pervasive donor fatigue has set in. In the 15 months I have been on the job, I have heard only quick, temporary, small fixes for the people of Gaza. Donors understand that none of us can significantly change the situation in Gaza in the current environment.

No one wants to spend money building and rebuilding, only to find what they build is damaged or destroyed in yet another conflict.

I have met many people from Gaza - impressive, resilient people. But there will be a limit to what we can do for them while Hamas is in charge. Hamas has managed to bring the people of Gaza, a people with a proud history and great potential, nearly back to the stone age. What an embarrassment, what desolation, what failure.

Posted by Max Solbrekken at 5:09 PM