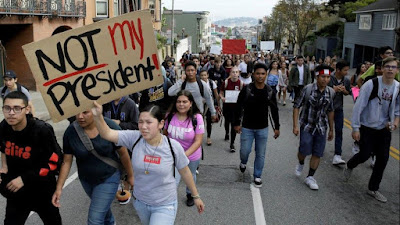 Donald Trump’s campaign manager took to Twitter Thursday to call on President Obama or Hillary Clinton to speak out against calls for political violence, as unruly post-election protests broke out for the second night in a row in cities across the country.
Police in Portland, Ore. declared that a once peaceful protest was a riot after demonstrators were seen attacking drivers and committing acts of vandalism during their march against Trump’s election Thursday night.
Kellyanne Conway, Trump’s campaign manager, flagged an interview with a woman from a separate protest the night before in Los Angeles. The anti-Trump protester called for people to “fight back,” warning, “There will be casualties on both sides. There will be, because people have to die to make a change in this world.”
Conway tweeted:

Kellyanne Conway
✔@KellyannePolls
Not cool. @POTUS or Hillary should address. 'People Have to Die': Anti-Trump Protester Calls For Violence on CNN http://www.mediaite.com/tv/people-have-to-die-anti-trump-protester-calls-for-violence-on-cnn/ …

'People Have to Die': Anti-Trump Protester Calls For Violence on CNN

During the massive anti-Donald Trump protests held in California the day after Election Day, one woman CNN spoke to called for violence and death as a means to enact political change.
mediaite.com