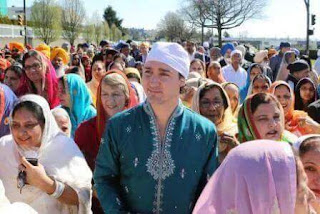 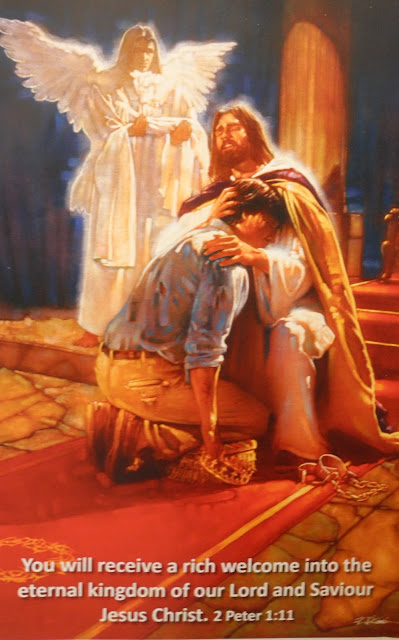 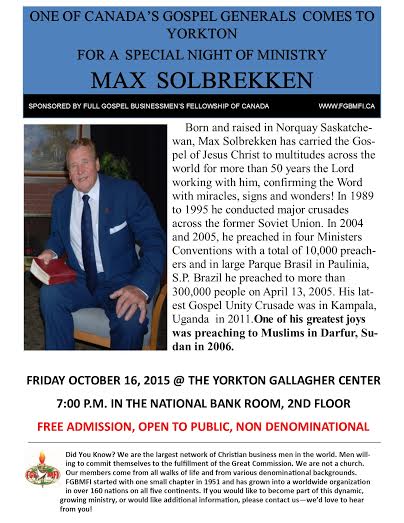 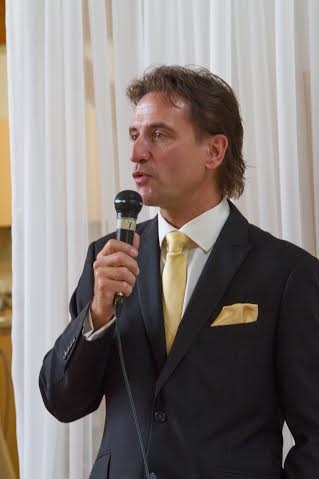 Donald Bouchard says: "Jesus saved me when
no one else could. That is why I love Him so much" 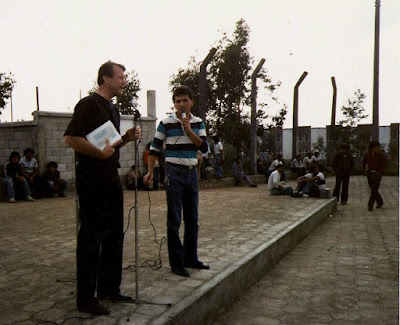 Pastor Max preaching in Guatemala's infamous
Pavon Prison in 1986. Guards refused to patrol
this area. They said, "We cannot help you. This
part of the Prison is out of bounds." We said,
"We'll be alright. God is with us", and He was.
The prisoners received us with no problems! 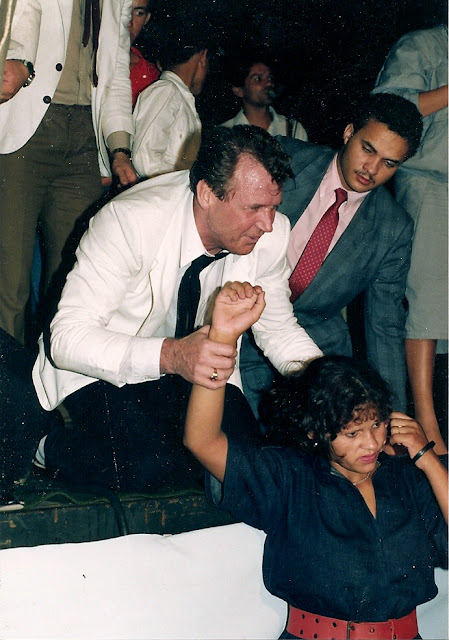 Casting out demons in Brazil, 1986. Samuel Ferriera
of the Assemblies of God interpreting Christ's victory
over the devil as the young lady is freed. 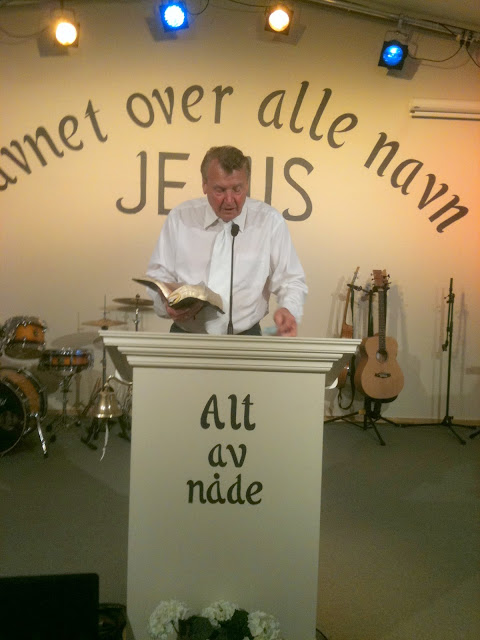 ALL BY THE GRACE OF GOD THROUGH JESUS CHRIST!
Pastor Max preaching in Norwegian at Froland, 2012 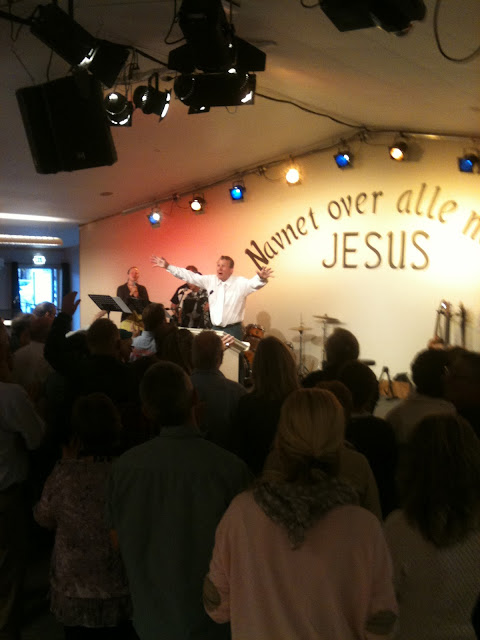 Pastor Max in Froland, Norway 2012 as many fill the
altar seeking after God through Jesus Christ our Lord 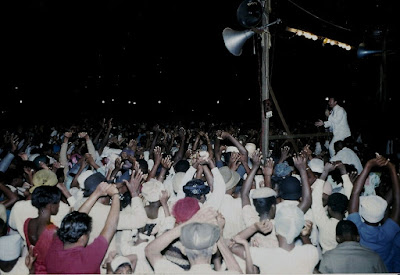 The Great Morvant Trinidad Crusade in 1968
brought large numbers of sinners to Christ
and marvellous miracles of healing for the
glory of God & the upbuilding of the Church. 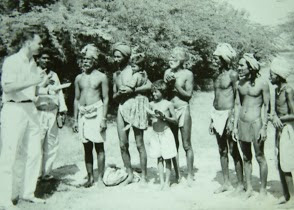 Pastor Max preaches to a group of transient
gypsies on the road in South India, in 1966. 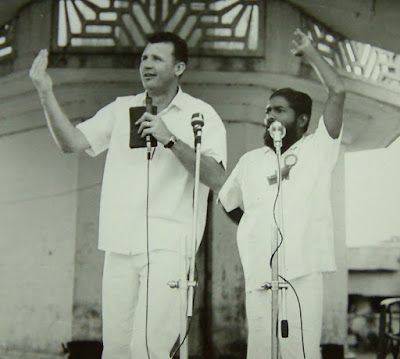 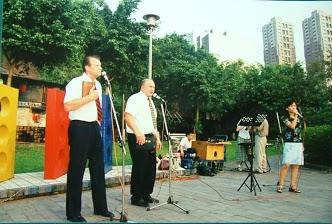 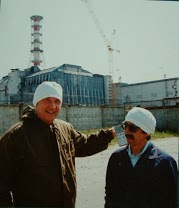 Pastor Max and Official at the doomed
Chernobyl Reactor in the Ukraine, 1992.
A crusade was later held at the new City
called Slavutich 40 kil away where God
did some wonderful miracles for them. 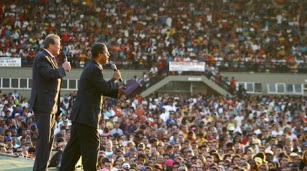 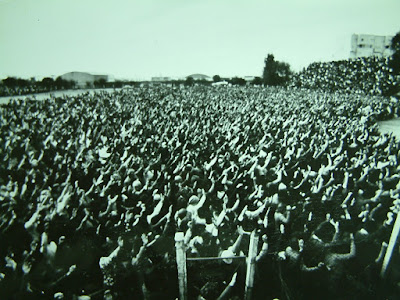 CORDOVA ARGENTINA ~ MAY 1 - 15, 1978
Almighty God used His humble servants Max Solbrekken and Omar Cabrera to open the hearts of Argentina's Military Junta when major crusades were not allowed in that country.
Omar had been asked by the Military to leave Argentina because his name was found on a rebel hit list. He was working on some translations for Morris Cerullo in California. In 1977, Demos Shakerian's son, Richard, called and asked if we could host Omar and Marfa for some meetings in our church.
While in Edmonton, Omar approached me about having a crusade in Paraguay and we decided to conduct a crusade in Asuncion Paraguay. Months went by and every time Omar sought to put it together, nothing worked right.
When I returned from Ghana Africa we called Omar and I explained that it was incumbent upon us to hold a crusade in Latin America and that I believed we should have the crusade in Argentina.
He was adamently apposed to the idea and said; "I will NEVER ever go back to Argentina."
I said, "Omar, I believe that God is telling me that we should hold the Crusade in Argentina!" Suddenly, he answered: "OK, we'll try Cordova." Amazingly, when he applied to use the Rocco Football Field in Cordova, we received permission. Omar was delighted that everything was working perfectly in our favour!
We started with 6,000 in attendance the first night. It seemed like everyone wanted to get saved and miracles were happening everywhere. Roman Catholic nuns and priests were tape recording my messages and were praising God with the rest of us. It grew quickly and many were born again and healed each evening! Several came out of wheel chairs made perfecly  well by our Lord Jesus Christ.
A well-known Business lady who had owned a very popular kiosk for 32 years and sold newspapers, tobacco and chocolates, and who had used crutches for 14 years and a wheel chair for seven years was instantly healed in our crusade.
Tens of thousands resonded to the altar calls to receive Christ and staggering miracles happened in a nation - stirring Gospel Awakening from May 1 to May 10, 1978. Omar stated that on the final evening there were 48,000 in attendance!
Omar Cabrera returned to that same venue two weeks later and drew 17,000 the first evening. The lady from the kiosk hung up her crutches and displayed her wheeel chair for all her customers to see. Her testimony caused 3,000 people to visit Omar's crusade.
Within 18 months he had a congregation of 8,000, 150 preaching points with 450 preachers workingr with him. In 1980 and 1982 I returned for crusades in Sante Fe, Raphila and other points! Then a young man named Carlos Anancondia became a leading evangelist and together with others have won several million souls to God.
OMAR & I MET WITH FOUR COLONIALS!
On the fourth day of the Crusade, the Police Chief came back to town to sign our permit. He had left town fearful of the powerful Catholic Church.  I called for a meeting with the four Colonials who ruled the Cordova area. They agreed to talk to me. I preached for 20 minutes about God and the devil, about heaven and Hell and about the Cross and the BLOOD of JESUS.
They were visibly moved, and the Leading Colonial shouted, "What do you want from us? " I answered, "Stop persecuting the Evangelicals. Stop persecuting the Pentecostals. Stop persecuting Dr. Vacarro and Omar Cabrera!" He said,"OK, what else?"
I said, "Get down on your knees and give your hearts to Christ!" They were stunned. Omar let out a great belly laugh and I smiled. They relaxed. I said: "I would like to pray for you and your familes." He said,"Yes. Please do that."
""I prayed a compassionate prayer and they thanked me and then shared how they had heard many good things about our crusade! The official persecution stopped immediately and the REvival swept across Argentina!" Hallelujah! That is how the Great Argentine Revival that is still sweeping Argentina started! All glory to God the Father through Jesus Christ our Lord, forever and ever. Amen.
- Pastor Max Solbrekken
Posted by Max Solbrekken at 1:29 PM