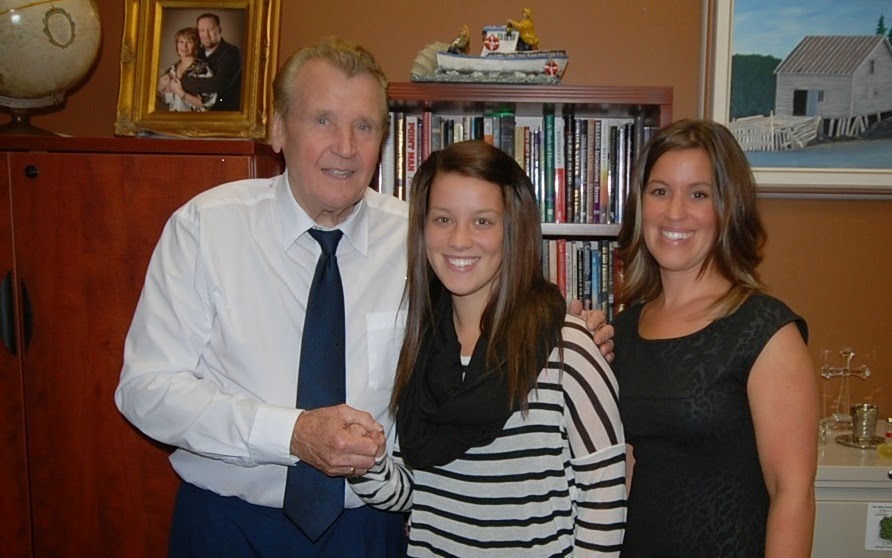 Max Solbrekken with Kaylie Ralph & her
mother Glenda Ralph, Sept 14, 2014
God Intervened. Kaylie was
Healed by a Miracle from Jesus!
Taken from the book, Oil Of A Different Kind - the FCC Story by Burton K. Janes.

Glenda Ralph has been part of Family Christian Centre since she was in
Junior High School. That’s where she met her husband, Milton. Their first daughter, Kaylie, was born May 14, 1994, when Glenda was 19. “She was born healthy,” the proud Mom says, that is, until they “realized she had a really bad growth in the corner of her eye.”
They were told it was a tear duct cyst. “It’s probably normal,” a pediatrician said, and it might go away within the first few weeks.”
However, it didn’t.
“It came to the point,” Glenda recalls, “where her eye was starting to close a bit. We had to push on the cyst to release whatever was in there. It would come through her nose and mouth. It was really awful.”
Kailie was taken to numerous doctors and, eventually, was sent to a spe cialist in Edmonton, who bound her tightly and cleaned her eye by applying a lot more pressure than her mother had done.
“Take her home,” the Ralphs were told, “and see how everything goes.” If Kailie’s eye did not clear up, the next step would be surgery. “We may have to put a hole down through her skull to have drainage from her eye.”
All the way home, Glenda prayed, “Please let that do the job.” Within mere weeks, Kailie’s worsened and, Glenda adds, “was actually starting to smell.” The baby was fussing, wanting to be in her mother’s arms all the time.
Glenda’s doctor told her she would have to take Kailie back to the specialist to determine whether or not to proceed with surgery. Naturally upset, Glena and Milton fervently prayed.
JESUS CHRIST TOUCHED KAILIE
WITH HIS NAIL-SCARRED HAND!
That fall, Evangelist Max Solbrekken came to Fort McMurray. Glenda attended, holding six-month-old Kailie in her arms and praying, “Oh, God, just do something in her life.” Glenda says she, was at my wits end. Kailie was so miserable and the lump on her eye was causing her so much grief.”
Glenda’s father, Fred Landon, took his granddaughter out of his daughter’s arms and carried her to the altar. Glenda says Kailie looked up at Sol-brekken as if to say, “He’s gonna heal me.”
The Evangelist took Kailie in his arms and prayed for her healing. By the time Fred had turned around to walk back to his seat, you could actually see the lump disappearing!
The next morning the lump was completely gone. Lying on a blanket on the floor, Kailie didn’t make a sound. She was so content, she didn’t even care if she ate that day.
The lump never returned, because Kailie was completely healed. Mean-while, there is still a scar on her eye as a reminder of God’s healing touch. “It’s amazing!” Glenda exclaims. ”It was remarkable because it was so fast.”