YESTERDAY, I AGONIZED IN    PRAYER FOR CANADA!  By Pastor Max Solbrekken

I wrote: O' Canada! Is this only the beginning or just a taste of what is yet to come to our beloved Nation? We didn't have long to wait. The Satanic Islamic Terrorist virus has invaded our nation infecting Canadians!
The Holy Bible warns of the last days: "Woe unto the inhabitants of the earth...for the Devil is come down unto you, having great wrath, because he knows he has but a short time." (Rev. 12:12)
Christians: We must pray for a genuine Revival of Righteousness in our land.
CANADA HIT: WHAT COMES NEXT?
Canadian soldier, gunman killed
in attack on Ottawa capital complex 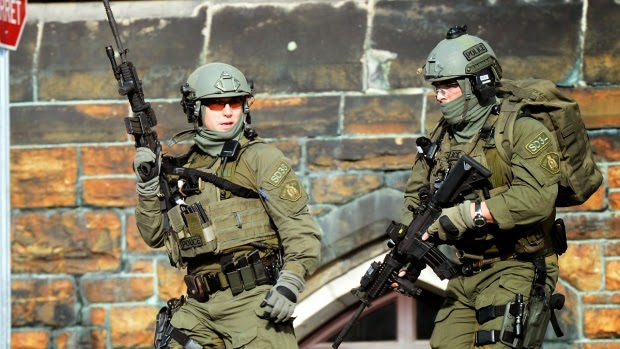 A Canadian soldier was shot dead and a suspect killed in a brazen attack on the Canadian Parliament complex in Ottawa Wednesday morning that left the nation's capital on lockdown just two days after a terror attack in Quebec, officials said.
The shots rang out just before 10 a.m., when a guard at the National War Monument was fatally shot. The gunman next ran into the Parliament Hill building, where one MP reported hearing as many as 30 shots fired and a sergeant at arms was later credited with shooting the suspect dead. In the following moments and hours, Royal Canadian Mounted Police converged on the scene, more shots were reported less than a mile away near a mall and officials told Ottawa residents to barricade themselves in their homes as they searched for more possible gunmen.


“All the details are not in, but the sergeant-at-arms, a former Mountie, is the one that engaged the gunman, or one of them at least, and stopped this,” Fantino said from inside Centre Block. “He did a great job and, from what I know, shot the gunman and he is now deceased.”
Posted by Max Solbrekken at 3:09 PM