Susan Rice is not sorry for her out and out LIES. There seems to be is no sense of guilt or shame from the arrogant people employed by the failed White House. - Pastor Max Solbrekken 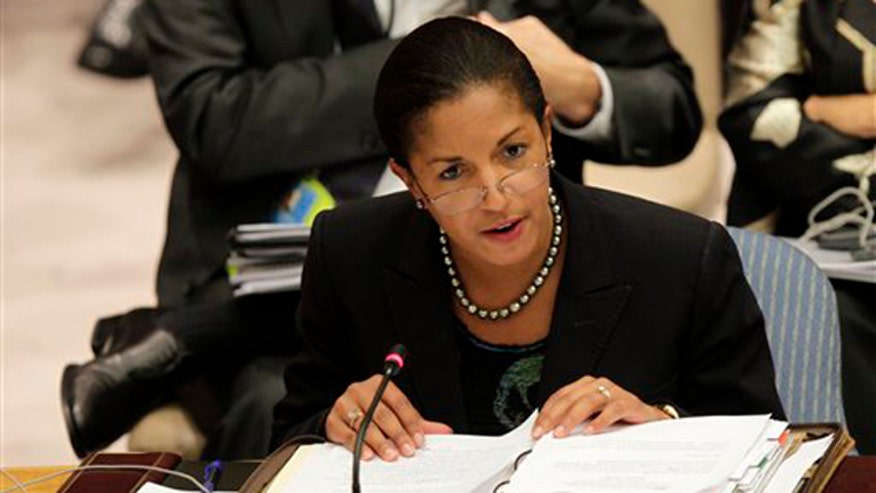 FILE: Undated: The U.S. Ambassador to the United Nations Susan Rice speaks at the General Assembly headquarters in New York.AP
National Security Adviser Susan Rice said Sunday she has no regrets over what she told the American public about the 2012 Benghazi terror attacks in the immediate aftermath of the deadly strikes.
Rice did a round of Sunday TV interviews a few days after the attacks, in which some of the information she gave was later proven incorrect.
“What I said to you that morning, and what I did every day since, was to share the best information that we had at the time,” Rice told NBC's “Meet the Press” moderator David Gregory on Sunday. “The information I provided … was what we had at the moment.”
Rice said “No,” when Gregory asked whether she had any regrets about her statements.
She also said nobody in the administration intended to mislead the public, but acknowledged some of her information was inaccurate.
“That information turned out, in some respects, not to be 100 percent correct," Rice said. "But the notion that somehow I or anybody else in the administration misled the American people is patently false. And I think that that's been amply demonstrated."
She was, at the time, the U.S. ambassador to the United Nations and a top candidate to become secretary of state.
However, Rice withdrew herself from consideration in the wake of the attacks on the U.S. outpost in Benghazi, Libya, after the firestorm of criticism she received for her response.
Rice said Sunday she didn’t know whether her responses killed her chances of getting the top U.S. diplomatic post.
“I don’t know,” she said. “What I do know is that I [now] have a great job.”
Four Americans were killed in the Sept. 11, 2012, attacks, including U.S. Ambassador Christopher Stevens. Former Navy SEALs Tyrone Woods and Glen Doherty, and State Department information management officer Sean Smith, also died in the attack.
Rice said the Benghazi attacks appeared to be a "spontaneous reaction” to an anti-Islamic video on the Internet.
The administration later said the attacks appeared pre-planned, but exactly who and what started them remains unclear, despite several investigations.

Posted by Max Solbrekken at 2:56 PM