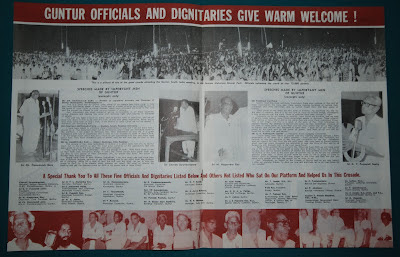 BY WHAT NAME OR POWER?

“And when they had set them in the midst, they asked, By what power, or by what Name have ye done this? Then, Peter, filled with the Holy Ghost said unto them, Ye rulers of the people, and elders of Israel. If we this be examined of the good deed done to the impotent man by what mean he is made whole:

“Be it known unto you all, and to the people of Israel. That by the Name of Jesus Christ of Nazareth, whom ye crucified whom God hath raised from the dead even by Him doth this man stand before you whole. This is the Stone which was set at naught of you builders, which is become the Head of the Corner. Neither is their Salvation in any other: for there is none other Name under heaven, given among men whereby we must be saved.” (Acts 4: 10-14)

St. Paul wrote: "Be sober, be vigilant, because your adversary the devil, as a roaring lion, walketh about, seeking whom he may devour." (1 Peter 5:8); "And it shall come to pass, that whosoever shall call upon the name of the Lord shall be saved." (Acts 2:21); “Wherefore Jesus also, that He might sanctify the people with His own Blood, suffered without the gate. Let us go forth therefore unto Him, bearing His reproach. (Heb.13:12,13)

“But ye shall receive POWER, after that the Holy Ghost is upon you:  and ye shall be witnesses unto Me both in Jerusalem and unto the utter most part of the earth.” (Acts 1:8). “…And these SIGNS shall follow them that believe; In My name shall they cast out devils; they shall speak with new tongues; They shall take up serpents; and if they drink any deadly thing, it shall not hurt them; they shall lay their hands on the sick, and they shall recover.” (Mark 16: 15-18)

“For God hath not given unto us the spirit of Fear, but of Power and of Love and of a Sound mind.” (2 Tim. 1:7): “If we suffer, we shall also reign with Him; if we deny Him, He also will deny us: If we believe not, yet He abideth faithful: He cannot deny Himself. Nevertheless, the foundation of God standeth sure, having this seal: The Lord knoweth them that are His. And, let everyone that nameth the name of Christ depart from iniquity.” (2 Tim. 2: 12,13, 19)

God’s Word is true! Satan is a Liar and a defeated foe. Our Lord Jesus Christ purchased our eternal Salvation through His vicarious death on Golgotha’s Cross, and His glorious resurrection three day later! Jesus’s victory over death, Hades and the grave stripped the wicked Destroyer of all power. The Blood of Jesus Christ did not die and effectively covers all believers in Christ from the attacks of the Evil One.

During our 1966 crusade in Guntur, A.P. India our blessed Saviour performed many great miracles. Thomas Tutyko and I joined Missionary Lawson Barbour and Pastor Vandenam, for a major Gospel Crusade in the Gandhi Freedom Park in Guntur, India. Thousands of people received Jesus Christ as their personal Saviour and Healer. I laid my hands upon the sick for healing as many hundreds came for prayer nightly.

A lady brought her 13- year - old son for prayer. He had earlier gone through surgery to have an eye removed. When he heard the testimonies, he pushed his way into the healing line. When he stood before me with hundreds of people pushing forward, I saw the raw infected eye socket. I laid my hands carefully upon him and prayed in Jesus’ name, for a miracle. Three days later, the doctor of the Kugler Lutheran Hospital called me with some great news.

The lady had asked her to examine her son. The infection was completely gone, and he was looking very well. Three days later, the woman and her son were in her office, again. A small eyeball had grown, and he could see perfectly!

Excitedly, the Doctor called me with the good news and that evening the doctor, the lady and her son stood on the Crusade stage and shared that great testimony for Jesus Christ, before thousands of people.

One day, 2 Circle Police Inspectors called on us! They handed me a letter which stated, “We the Circle Inspectors of the Guntur District are inviting you to accompany us to the Guntur Hospital to heal the Superintendent General of the Police, who has suffered a Stroke.

Thomas and I followed the Police vehicle to the Guntur Hospital, which was encircled by Police cars. As we walked with the 2 Circle Inspectors down the corridors of the hospital, policemen stood to attention saluting them. They brought me to a room where the sick officer lay. His wife and sister-in-law were seated in the room. The two officers stood at attention. I sat on a chair near the ill Officer. I said, “You sent for me, Sir.” He replied in a very low and weak voice, “I want you, heal me name of Lord Jesus.”

I answered, “Since you have asked me to heal you in the name of Lord Jesus, I must tell you why His Name is so powerful.” He nodded that he understood what I had said. For fifteen minutes I gave Him the Gospel of Jesus Christ declaring Jesus Christ the Son of God who died on the Cross to redeem us from sin and the power of Satan, had risen from the dead. I stated that Jesus Christ was alive and through His shed blood and glorious resurrection from the dead, He has the power to save and heal those who believe. I asked him if he desired to receive Jesus a his Lord and Saviour. He answered in the affirmative. Although it was hard for him to speak, I led him through the prayer of repentance, receiving Jesus Christ as his Lord and Saviour.

Then, I laid my hands upon Him and prayed a short prayer for healing and deliverance in Jesus Christ’s name. Immediately, his drooping face changed. The right side of his face was immediately normal. Then, I took his right fist that was balled up on his chest; I said, “Open, in Jesus’ name.” It came free!

I said, “Jesus has healed you!” He smiled and said, “Yes.” I asked, “What are you going to do?” He said, “I am going to get up and walk.” He threw the blanket off and I helped him out of bed. I took his hand, and we marched down the corridor. He shook himself free from me and marched back and forth. Then, standing before me asked, “Whom do I thank for this, Sir?”

In India we had crusades in the south where God poured out His Spirit on the hungry people and saved them and healed them. Then we went to the city of Gunter in Andra Pradesh and they wouldn’t give us a place in their city to hold a crusade. The only place they would give us was a cow pasture outside the city with the cows still in it. It was terrible because the people were not able to sit down on the grass.

On the second day 2 men came and said we are from the Police Department and we have come with an urgent request. The Commissioner of Police had a stroke and his one side is totally paralyzed and is lying in the hospital. We heard that you pray for the sick so we have come to ask you to come to the hospital and pray for the Commissioner, will you come?  Max answered, of course we’ll come and so we went with them.

We entered the hospital room where he was lying in bed and we could see that one side of his face was not normal which is sure sign of a stroke. There were nurses and doctors around him. They said please come and pray for him. So we went over to the bed and Max asked him to nod his head if he understood what was said.

He nodded because he understood English. So Max ministered the gospel to him,  and asked him if he believed that Jesus had the power to heal him. He nodded his head to say yes.  Then Max laid his hands on him and rebuked the stroke in the Name of Jesus and said, “Jesus heals you now.” Then he said to him, I’m going to help you sit up.

So the man sat up and Max pulled his legs over the side of the bed and said, stand up on your feet and helped him stand. (the doctors and nurses are watching all this taking place.)  Then Max says, lets walk and took a few steps with him and then he said to him, run, run, run, and the commissioner ran to the end of the corridor and back totally healed by the power of God. There was no small stir in that hospital that day.

The nurses were fluttering about with tears in their eyes while the doctors kept their eye on the Commissioner just in case. But he was healed and felt better, than ever before. He was so happy and overwhelmed that he felt that he wanted to repay us somehow, so he asked, "Is there anything that I can do for you?" Max says to him, we came to your city to bless your people and bring them salvation and healing, but you sent us out into a cow pasture, maybe you can do something about that. The commissioner answered don’t worry, “I’ll take care of that.”

The next night we were in the centre of town in a beautiful park with a large platform brightly lit up and on the platform were seated a dozen city dignitaries including the Mayor. There was a large crowd of people and the Commissioner stood up and gave his testimony of how Jesus Healed him and encouraged the people to receive us and believe what we are preaching. Then the Mayor got up and made his speech and commanded everyone to come to these meetings. After that the park was jam - packed every night and great miracles took place. There were a great number of deaf and dumb that were healed.”

Jesus said: “All things are possible to him that believeth.” (Mark 9:23); “…With men it is impossible, but not with God: for with God all things are possible.” (Mark 10:27); “He that believeth on the Son of God hath the witness in himself: he that believeth not God hath made Him a liar; because he believeth not the record that God gave of His Son. And this is the record, that God hath given to us eternal life, and this LIFE is in His Son. He that hath the Son hath Life; and he that hath not the Son of God hath not life.” (1 John 5: 10-12)

Looking back at the great miracles that Jesus performed in our crusade services for the past  sixty years in His Ministry is staggering to say the least! Glory be to the Lamb that was slain for all humanity and raised from the dead by the Holy Spirit of God! Amen.

Posted by Max Solbrekken at 9:37 AM