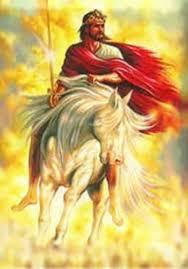 WHO IS THIS THAT COMETH?

“WHO IS THIS that cometh from Edom, with dyed garments from Bozrah? this that is glorious in His apparel, travelling in the greatness of His strength? I that speak in righteousness, mighty to save. Wherefore art Thou red in thine apparel, and Thy garments like him that treadeth in the winefat?

“I have trodden the winepress alone, and of the people, there was none with Me: for I will tread them in Mine anger, and trample them in My fury; and their blood shall be sprinkled upon My garments, and I will stain all My raiment.

“For the Day of vengeance is in Mine heart, and the year of My Redeemed is come. And I looked, and there was none to help; and I wondered that there was no none to uphold; therefore Mine own arm brought salvation unto Me; and My fury it upheld Me.” (Isaiah 63: 1-5)

Dr. Henry Morris shines light on this amazing Scripture. He writes: “The Spirit of God in some way has "transported" the prophet to a time future to himself... Clearly this is prophetic or eschatological and is one of the most majestic, intriguing descriptions of the Messiah at His Second Coming. While it is a passage addressed to Israel, it is a passage filled with great hope of a great future redemption by our Great God, Who alone is mighty to save...”

The prophet refers to the Messiah's First Advent as the Sacrificial Lamb bringing salvation to all who believe, as well as His Second Advent in the Rapture of His Church. He also warns sinners that following mankind's rejection of God's Mercy, there will be an outpouring of His Judgment such as the world has not before seen!

WHO IS THIS? JESUS OF NAZARETH!

The Bible says: “And when He was come into Jerusalem, all the city was moved, saying, Who is this? And the multitude said, This is Jesus the prophet of Nazareth of Galilee. Jesus went into the temple of God, and cast out all them that sold and bought in the temple, and overthrew the tables of the money changers, and the seats of them that sold doves. And said of them, It is written, My House shall be called the House of prayer, but ye have made it a den of thieves. And the blind and the lame came to Him in the temple and He healed them.”

Who is the Man that has the power to forgive sins? Who is this Man that was conceived by the Holy Spirit, born of a virgin, crucified, buried and rose again on the third day? Who is this Man that lived only thirty three years and yet is the same yesterday, today and forever? Who is this Man that promises “world without end” to those who answers the call to surrender all and follow Him? Who is this Man before whom angels bow down and worship, and demons scream, “We know who Thou art, the Holy One of God?” Who is this One that laid aside His power and authority, was denied by Simon Peter, betrayed by Judas Iscariot, rejected by the Jews and crucified by the Romans?

Who is this Man that caused the earth to open, tremble, quake, the rocks to split and the sun to darken during His suffering, agony and death? Who is this Man who caused the Roman Centurion and his soldiers to fall on their knees and cry, “Surely this man was the Son of God.” I will tell you Who He is!

He is the One who created the worlds and all things! He is the architect of Creation and by His Words the creation consists! He overcame death, Hades and the grave. He is the One who conquored Satan eternally. He is Jesus Christ the crucified, risen and ever living Saviour of the World and Lord of lords and King of kings. He is my Saviour, Lord, Healer and Redeemer. He is Eternal Life! Glory be to God the Father and Son of the Living God forever and ever!

'He came to earth, the promise to fulfill. A rugged cross, He bore up Calvary's hill; And for my sins, He cried Father please forgive; Born to die, So that I might live.

Accused of sin, yet silent He remained; No one came forth to witness for His Name Between two thieves, He bowed His head and cried, It is finished now, I came to die'.

JESUS CAME TO SAVE THE WORLD!

Our Saviour stated: “I am the Door: by Me if any man enter in, he shall be Saved and shall go in and out and find pasture. The thief cometh not but for to steal, and to kill and to destroy: I am come that they might have life, and that they might have it more abundantly.

“He that rejecteth Me, and receiveth not My words, hath One that judgeth him; the Word that I have spoken, shall judge him in the last day. For I have not spoken of Myself; but the Father which sent Me. He gave Me a commandment, what I should speak. And I know that His commandment is Life Everlasting: whatsoever I speak therefore, even as the Father said unto Me, so I speak.” (John 12: 44-50)

“These words spake Jesus, and lifted up His eyes to Heaven, and said, Father, the hour is come; glorify Thy Son, that Thy Son also may glorify Thee. As Thou hast given Him Power over all flesh, that He should give Eternal Life to as many as as Thou hast given Him. And this is Life Eternal, that they might know Thee the Only True God, and Jesus Christ, whom Thou has sent.

“I have glorified Thee on the earth: I have finished the work which Thou gavest Me to do. And now, O Father, glorify Thou Me with Thine own Self with the glory which I had with Thee before the world was. I have manifested Thy name unto the men which Thou gavest Me out of the world: thine they were, and thou gavest them Me; and they have kept Thy Word.

“O righteous Father, the world hath not known Thee; but I have known Thee, and these have known that Thou hast sent Me. And I have declared unto them Thy name, and will declare it: that the love wherewith Thou hast loved Me may be in them and I in them.” (John 17: 1-26)

“Behold He cometh with clouds, and every eye shall see Him, and them also which pierced Him, and all kindreds of the earth shall wail because of Him. Even so. Amen. I am Alpha and Omega, the beginning and the ending, saith the Lord, which is, and which was, and which is to come the Almighty.

“I was in the Spirit on the Lord's Day and heard behind me a great voice, as of a trumpet, Saying, I am Alpha and Omega the first and the last...And I turned to see the Voice that spake with me. And being turned, I saw even golden candlesticks one like unto the Son of man, clothed with a garment down to the foot, and girt about the paps with a golden girdle.

“His head and His hairs were white like wool, as white as snow: and His eyes were as a flame of fire; and His feet like unto fine brass, as if they burned in a furnace; and His voice as the sound of many waters. And He had in His right hand seven stars: and out of His mouth went a sharp two-edged sword: and His countenance was as the sun shineth in his strength.

“And when I saw Him, I fell at His feet as dead. And He laid His right hand upon me, saying unto me, Fear not; I am the first and the last: I am He that liveth, and was dead; and behold I am alive forevermore, Amen. And have the keys of Hell and of Death.” (Rev.1:7-18)

“Afterward He appeared unto the eleven as they sat at meat, and upbraided them with their unbelief and hardness of heart, because they believed not them which had seen Him after He was risen. And He said unto them, GO YE into all the world, and preach the Gospel to every creature. He that believeth and is baptized shall be saved; but he that believeth not shall be damned.

“And these signs shall follow them that believe; In My name shall they cast out devils; thy shall speak with new tongues; They shall take up serpents; and if they drink any deadly thing, it shall not hurt them. They shall lay hands on the sick, and they shall recover.”

“And this GOSPEL of the Kingdom shall be preached in all the world for a witness unto all nations; and then shall the end come.” (Matt. 24:14). Amen.

As it was in the time of Christ, so it is today. The sins of unbelief and hardening of heart are two of the worst sins in the church! The cause of these two sins is a lukewarm spirit that has pervaded the church. Jesus gives us the medicine for lukewarmness, hardness of heart and unbelief: Repent and Return to Christ:

Posted by Max Solbrekken at 8:59 PM