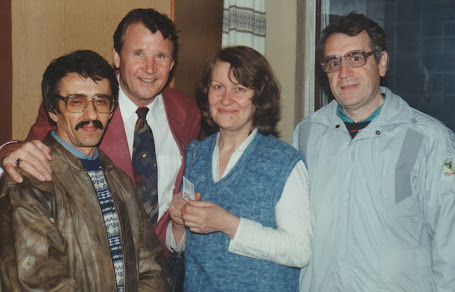 Film Maker Bosovich was saved when his journalist wife was healed. Bosovich produced  a movie 'Max Solbrekken in the Ukraine', including Chernobyl 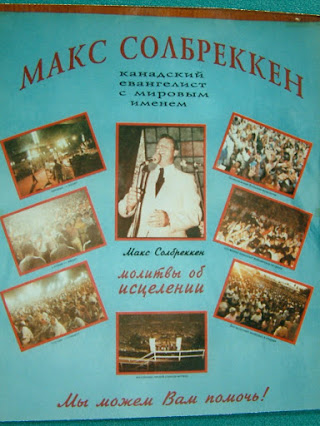 This Poster used in Russian Meetings 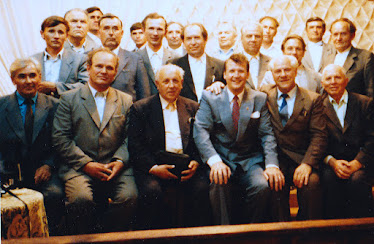 Some of the many pastors who worked with us 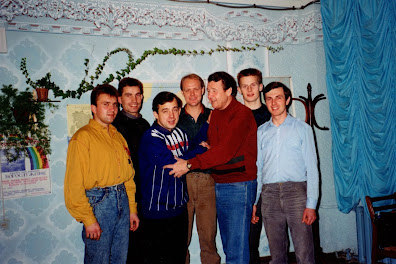 My Ukraine Team were wonderful to work with in 1990's 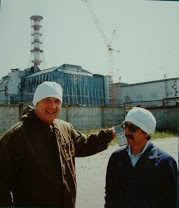 Doctor of theological science, Max Solbrekken leads the World Mission of Evangelicals in Canada and mission 'Europe for Christ' in Norway. Recently he was in Chernigov and Slavutich and intends to meet with Chernigov residents on September 3, again.

About time and myself: 'Strong in spirit', 'united in spirit” - these words are familiar to us. Aren’t they? From where did they come to us? Isn't that from the gospel, the book which is 2000 years old now and which humanity calls a Book of Life.

The old people knew the power of the Holy Spirit and prayed to Him. I was taught that prayer by my Grandpa. “Holy Spirit”! Come into my body and make it free from all defilement, heal me!!!

“My Grandpa who lived a long life did not go to doctors. As I understand now, he could concentrate all body strengths and direct them to destroy any disease. All his life he believed in God who does good work by the power of the Holy Spirit.

“Here we are getting closer to understanding this very word “spirituality” without which now, after the tragedy of Chernobyl, we can not survive. It is necessary to believe. Believe in whom? It is possible to believe even at the neighbor, but only at that who will lend a helping hand and say, “Peace be upon you!” Faith is inherent in us along with genes. In many, however it was taken away, but what was given instead?

Atheism? Now, it is called an intellectual crime. You can’t disagree with that after two speeches which I heard at the meeting held by Dr. Max Solbrekken especially. I worked as a kindergarten teacher. Children grow up violent. They fight to the first blood, and word “God” is unfamiliar to them. They cannot pray and ask for good for themselves and nearest loved one.”

“ I am almost 70 years old and I am a doctor. After the sermon that Doctor Max gave, I understood: all my life I told people something wrong. God, what have we done? We had to heal the soul, but we only heal the body.”

GOSPEL HAS IMPACT ON PEOPLE!

“What can Dr. M. Solbrekken tell us about this? He said, The Gospels have an impact on people the same way, doesn’t matter what religion you are adhere to. This Book brings a peace, forgiveness, of sin, and when the sins are forgiven, the enlightenment of the soul come, and great joy comes.

“The person feels inner freedom, the ability to think about good; the nice thoughts come over to this person who seeks to share them with others. People are anxious, having a lot of problems.

“I feel a great love in my heart for people of each country. God asks me to be here in Ukraine, to help people growing spirituality. When I preach the Word of God, miracles always. Miracles of salvation and healing happen because God helps us. God is interested in us.

It was an ordinary spa day in Truskavets. (spa-resorts city) At five in the evening I went to drink “Naftusya” (medicinal mineral water), which, as some say, removes radioactivity. I thought about my state of health that is worse than ever, and vacation is almost over. For three years I did not leave the area affected by Chernobyl, and they made themselves friendly.

There was a crowd near the pump room and funny songs about God, the Holy Spirit. The young modern people sing them. As I found out later, these were Truskavets youth and girls from the mission. “Good news.”

Here comes the preacher. How inspired he speaks! What is he talking about? God is true! The Lord is the creator of the world, God the Holy Spirit. The Holy Spirit! The Holy Spirit is everywhere, health, it strengthens us morally and protect us from unworthy deeds, negative impact that leads to no good.

If it is really so, - someone was whispering, - prisons would be empty because no one would do harm to another.” Now – a prayer for the health of those present. It means for mine too. It is necessary to repeat the words of prayer after the preacher. I looked around: a guy of 18 years old prays (people know how!.) a familiar director of school from the Riven region quietly repeats a prayer, and I raise my hand to the sky and whisper with everyone, “Hallelujah, Hallelujah Hallelujah”.

Preacher Dr. Max asks to check what changes have occurred with each. I checked my pulse by the clock. When I walked here, the pulse was 110. Miracle?! Pulse is 64. I am trying to bend over, and nothing hurts. Sciatica disappeared.

A women is crying next to me. “ what’s wrong with you? – I asked. “ From the age of five, after the injury, I could hardly pick-up sounds, and now I can hear it so clearly. My hearing is back! Lady – I called her when she has turned to go. She comes closer.

“What is your name?” All of my life I was called deaf Sonka, and now, I will be Sofia Ivanivna. (in East Europe, the respectful treatment of adults requires a full first (Sofia and middle Ivanivna) names. Someone who is dismissively called not by the full name, but by the abbreviated name, cannot had respect (Sonka).

Because I am hearing now, I am (Sofia lvanivna Chorna.) It is a miracle when an ability to hear comes back to someone. And I will watch this more than once. Here is a four-year-old girl on the young mother’s shoulders. The baby was deaf before now, Dr. Max is next to her, he snaps his fingers above her ears and girl is counting: “one. two, three …”

How much joy in the eyes of the mother! Later, in Chernigov, familiar to me - teacher came up to me and said the good news. The fact is that she had to scream in her mother’s ear when she talk to her past years. After her mother had visited Dr. Max Solbrekken, her hearing came back. In the morning, she woke up because "the clock was ticking on the wall.”

Here is another interesting testimony of healing: “My name is Maria Bezvwehko, I came from the town Selidovo which is situated in Donetsk area. The machine tore off the fingertip. I had an operation. For several months there was a painful fistula. Watching three meeting, during Dr. Max prayers, I held my good hand on my sore fingertips as the preacher told, a miracle happened – the fistula healed. God healed me.

Thank God! Frail people walked holding crutches above their heads – they were healed now. When 10-12 years old children came up to the microphone and told us the stomach ulcer had ached, how the liver had ached, and now nothing hurts, tears welling up in the eyes! One young mother speaks into the microphone: “God healed my child. My son, who imbued with faith, managed to overpower, drown out the pain without pills and injections – and it is his own victory over oneself.

Some may say that pain is necessary because the body react to the disease, but I disagree, because in conditions where there are no drugs at all, relieving pain by concentrating the potential of your body is great power. It has always been called willpower. Believers call it God’s power! The Holy Spirit power. So be it!

We need to believe and with faith in our hearts overcome today’s difficulties…” Writing the evidence about all these people who were healed, I know I should write about this very special person inviting him to come over in our city. I believed he would come to Chernigov and give me the interview:

You Doctor Max are a writer, author of 15 books. Tell us what are writing about. I am writing a deep truth about God’s Word, but in such a simple language that everyone could understand everything. On my desk is a stack of notes of gratitude from Chernigov’s dwellers addressed to M. Solbrekken. I did not miss a single evangelism that Dr. Max Solbrekken conducted in Chernigov and Slavutich. It was about fifteen meeting in account.

I feel much better. I even got rid of the thought of my illness. I try to lower my blood pressure without pills, control heart rate, relieve headache. If you would like to know, I have strengthened spirituality, and it’s this feeling that gives confidence that I can overcome the disease, and not vice versa.

I always asked God to give Dr. Max an inspiration and health, so by the power of his words he brought joy. Interviewing Dr. Max, I asked: “What is God?” He begin to explain in detail about the flora and fauna, about humanity as the crown of the creation of the Almighty. Picking up shatter and throwing it up, he said:

“And here is God.! If we, the crown of creation of the Lord, respected nature, would there be Chernobyl smoke above our heads now? Would Desna (the river in west Ukraine) die before my eyes. Would Strezhen (river) be poisoned! Would the forest “west” from radiation? Would mother earth be poisoned? To whom should we extend our hands today? Begging for help? God! Have mercy on us for our sins and save us!

P.S. Dear citizens of Chernigov, you like me, witnessed the healings and were healed ourselves thanks to sermons of Dr. Max. Write about what you have experienced. I will give these letters to Max Solbrekken. Address: Chernigov-30, poste stante. Ukraine.

Posted by Max Solbrekken at 2:08 PM