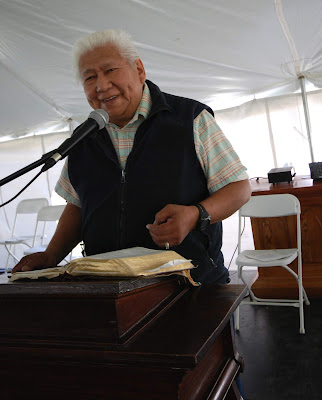 A LIFE OF MIRACLES!
By Pastor Max Solbrekken, D.D.
When I would preach in the Vancouver area, Claude Wilson  always showed up. He had a great hunger for God and never missed a meeting, even though he worked hard as a longshoreman offloading cargo from ships.
When we started the Canadian Bible Academy in Edmonton, Alberta in 1974, Claude showed up. He studied hard and sometimes I would ask him to look after the House of Refuge in downtown Edmonton.
Rev. Magnar Bremnes, also a student at C.B.A. remembers Claude inviting him to preach and remarked, "Claude Wilson was strong in the faith."
YES, HE IS STILL STRONG IN FAITH!
As a boy of 13 while riding his bike, Claude was hit by an automobile and thrown to the ground, striking his head. After that accident, he began having epileptic seizures and was unable to obtain a driver's license.
The Medical doctor believed that his head injury was the cause of the seizure attacks. While working in a fish plant in Prince Rupert, B.C. Claude was near a large fish tank when he had a grand mal and was thrown headfirst into the tank.
At that very, the foreman was coming around the corner and saw his feet sticking up and was able to rescue him from a certain death.
In 1978, I was holding some meeting in the Vancouver area and went to Radio Kari in Blaine, Wa. to record some broadcasts. Claude accompanied me there. It was Saturday morning and the studio was empty except for Gary, the radio announcer and me in another studio across the hallway.
As I was about to begin recording, Claude asked if there was something he could do for me. I replied, "Yes, get me a coffee"
Suddenly, I heard a real racket in the hallway. I dashed out to see Claude on the floor having a grand mal epileptic seizure. Gary put some music on the radio and came into the hallway.
Claude was thrashing about and I feared he would swallow his tongue, but I had nothing to help him with.  I fell my knees and laid my hands on him, calling on God in Jesus' Name for a miracle. All of a sudden, he became quiet and opened his eyes and sat up. He asked, "What happened?"
HE'S BEEN DRIVING EVER SINCE!
He stood to his feet perfectly normal. Usually, when people have a grand mal they are groggy and unable to function normally for more than 5 or 6 hours.
Gary just stood in amazement, shook his head and went back on the open mic and went back to my recording. Claude asked, "Is there something I can do for you?”  I replied, "Yes, please get me a coffee."  And Gary still remembers that awesome miracle of God!
Shortly thereafter, went to see a doctor and took all the tests. He was normal all around, and he's been driving ever since! Praise God.
Some years ago, Claude was contacted by Jerry Attache from a little Indian Reservation in Northern B.C. It was a Roman Catholic village and the only person who would lodge him was the village drunk. He was given a place to preach and had services every evening.
Things were going very slow and his host was drunk most of the time, but Claude just prayed and preached. After more than a week the drunk had a born again experience and the entire village came to Christ!
If you get an opportunity to hear him preach, please do so. Amen.
Posted by Max Solbrekken at 10:11 PM