If world leaders would learn from the wisdom of President Ronald Reagan they would be respected by intelligent people! - Pastor Max Solbrekken 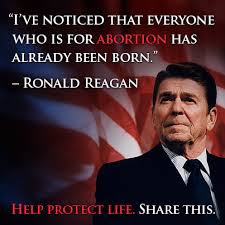 Train and Dart stations in Dublin and elsewhere in Ireland, owned by Ireland’s national public transport provider, CIÉ, are advertising the abortion March next weekend (30/09).

They are supporting a movement which believes that the law should permit a mother to kill her own son or daughter so long as he or she is in the womb.

One need only look at Britain to see the disastrous effects of their abortion law. There are almost 200,000 abortions every year, that’s one in five pregnancies ending in abortion and millions of women’s lives torn apart by abortion since 1967.

There are now 8 million “missing” men and women from Britain. In N. Ireland, the Advertising Standards Association affirmed that the abortion law there has saved over 100,00 lives.

Ireland must not make the same mistake as its neighbours. Ireland should be proud of the 8th Amendment which recognises the value of the life of mother and baby.

Greg Jackson
Posted by Max Solbrekken at 8:48 AM