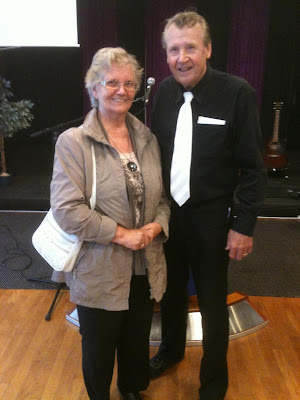 Pastor Max Solbrekken with Rigmor Sund
at the Studios of Visjon Norge TV Norway
on June 3, 2012.

After suffering excruciating pain and waiting for surgery for a long time, Rigmor Sund received replacements in both knees after prayer. Her doctor was overjoyed. He said, "Call the Hospital immediately and cancel the operation."
RIGMOR SUND TESTIFYING OVER
VISJON NORGE T.V. ON JUNE 3, 2012:

My surgery was scheduled for November 7, 2006 at the Hospital at Kristiansund. I lived in northern Norway but was staying in Eide which is 30 kilometers from Molde in Romsdal. When my knees were giving me excruciating pains, I was given an MRI which showed that both my knee caps were worn out and I needed complete replacements.
Naturally, I was shocked because I had no desire to have the operation. I could no longer drive the car and the pain was getting worse.
TWO GOOD LUTHERAN FRIENDS!
I had  two good Lutheran friends who encouraged me. Then, something wonderful happened. My friends told me the good news that Max Solbrekken would be preaching in Molde on October 26 and that he prayed for the sick. My heart leaped within me with expectation. My friends said that they would gladly drive me to the meeting.
The meeting was anointed of God and when Max Solbrekken invited the sick to come forward, I answered the call.  When he laid his hands upon me, I did not feel anything special happening there and then. And when we drove home, we all agreed that it had been a very fine meeting.
I always dreaded getting into bed because of the pain I endured if I only moved myself a little. I had to use both hands to lift my legs onto the bed as I was unable to get into bed normally, and if I moved during the night the sharp pain of bone rubbing against bone would awaken me.
THAT NIGHT I SLEPT UNTIL MORNING!
That night I slept till morning and when I awakened I had brand new knees! I was able to walk, run up and down the steps, drive my car and kneel in prayer! I had been healed. Jesus had touched me and I was overjoyed. Through Max Solbrekken's prayer, the Lord had come into me with His heaing power. I went immediarely to see my doctor to tell him that I did not need the operation. He was overjoyed and said, "Call the Hospital immediately and cancel the surgery!"
All my medical reports are still in a docket at the Hospital and I am as free as a bird. I praise God and thank His servant Max Solbrekken for his faithfulness in praying for me.!!! My testimony went far and wide for Jesus in EIDE and district, but I was unable to contact Max Solbrekken until I saw him on Visjon Norge TV on May 31, 2012. I attended his crusade and told him the news, and asked prayer for my hearing and rheumatism. After prayer, all the pains left and I am hearing better as well. All glory to God!
Posted by Max Solbrekken at 10:03 PM