HOW THE ARGENTINA
REVIVAL STARTED 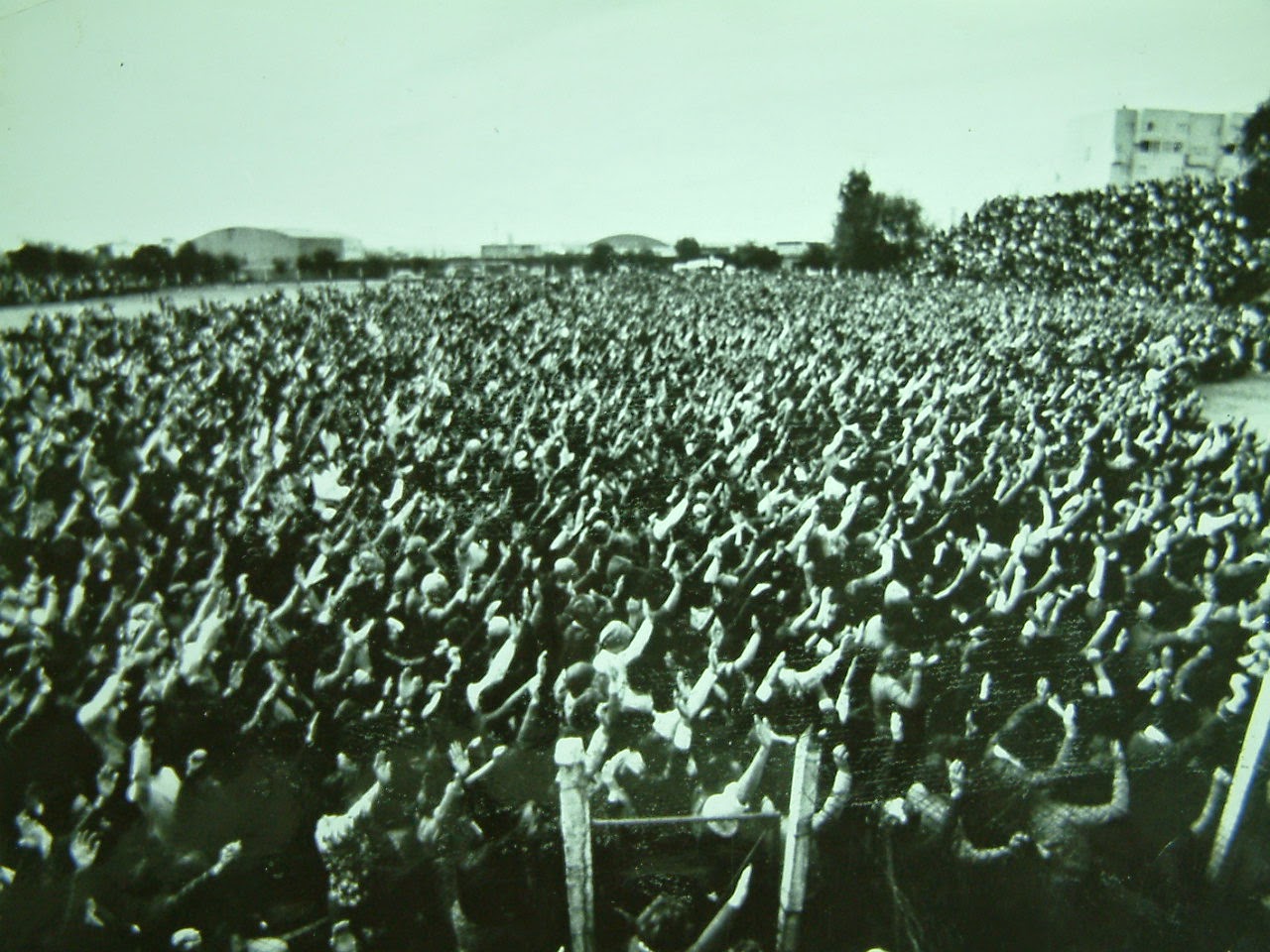 Max Solbrekken & Omar Cabrera reach Cordova, Argentina
In the summer of 1977, I received a call from Demos Shakarian's son Richard, enquiring if we would invite Omar and Marfa Cabrera to Edmonton for some Gospel Meetings.
I asked, "Who is Omar Cabrera?" Richard stated that Omar Cabrera  had been ordered by the Military Junta to leave Argentina, because his name had been found on a 'Rebel Hit List'. He was living in the USA and doing some book translations for a Ministry.
He stated that Omar Cabrera had written a book titled, 'Guns, guts and God in Latin America'. The Roman Catholic Church opposed him, as did the Military Junta, the Medical Profession and the Evangelical Church. And because he wore the clerical collar, even the Pentecostal Church was critical of him!
I said: "The Bible states to beware when all men speak well of you, and there must be something special about a man who against all odds wouldn't leave his post until forced to do so. I will be pleased to have such a man."
My background in the Lutheran Church and admiration for the Father of the Protestant Reformation, Martin Luther, immediately made me want to meet this fearless Argentinian Crusader!
OMAR & MARFA COME TO CANADA!
Donna and I warmly welcomed Omar and Marfa and we had great fellowship. Omar said: "Brother Max, I want to go to Ascunsion, Paraquay. We will rent the large stadium there and  have a Crusade. It will cost $10,000, and you will pay for it. We will reach many people and we will build a large church seating ten thousand. It will cost $100,000 and you will pay for it!"
I said: "Omar, We will start with the crusade." Omar began making arrangements for the crusade, but was repeatedly unable to get the stadium for the dates we put forth. There was always a block; nothing was working in our favour.
In the spring of 1978 I had just returned from crusades in Ghana, Africa, and people were beginning to ask about our proposed Paraguay Crusade.
I called Omar to share my concerns. I said," Omar, I believe we should have the crusade in Argentina!" He was adamant, declaring that he would not ever go back to Argentina. Several times I stressed that I felt God wanted us to hold the crusade in Argentina, against all odds!  Finally, he relented saying: "OK, we will try Cordova."
MANY THOUSANDS SAVED & HEALED!
He was able to rent the Rocco Football Field for May 6-15, 1978. It was a miracle of God. The Chief of Police left town, being afraid to sign the permit.
The Crusade began with 6,000 people and miracles began at once. The Roman Catholic Church lost control of the people as nuns and priests rejoiced openly and praised God! The crowd grew to 10,000 almost immediately. The Police Chief returned and signed the permit.
I said to Omar: "I would like to speak to the four Colonials of the  Military Junta which rules the Cordova District."
They invited us to meet with them. After bringing them greetings from Canada, I laid out God's Salvation Plan. For about fifteen minutes I peached the Gospel with great anointing. I spoke about God and the Devil, Sin and Salvation, Christ and His shed blood, Heaven and Hell and Judgement!
Suddenly, the leading Colonial cried out: "What do you want from us?" I answered: "Stop Persecuting the Evangelicals. Stop Persecuting the Pentecostals!" He answered: "Okay! What else do you want?" I said: "Get down on your knees and give your hearts to the Lord." They looked shocked.
Omar let out a great big laugh and I smiled. They relaxed. Then, I said: "I would like to pray for you and your families." He said: "We have been hearing good things about your crusade. At first we though you were Jehovah Witnesses but realize that you are a blessing from God." Reverently, they bowed their heads as I prayed for them, their families and their nation!
THE OFFICIAL PERSECUTION STOPPED!
From that moment forward the official persecution stopped. That was the turning point for Argentina! There were no crusades being held there because of the Military Rule, but God opened the door for Omar Cabrera and me to reach Cordova for Christ.
Great Miracles happened every night and the crowd grew to 48,000 on May 15, 1978. During the final service, Omar announced that we would be back there in two weeks for another Crusade, which drew 17,000.
A well known business lady who owned a kiosk was instantly healed in our crusade. She put her crutches and wheel chair on display. Three thousand (3,000) people who knew her crippled condition, attended Omar's crusade.
His Cordova Church grew to 8,000 in 9 months and within 18 months he had 150 churches with 450 pastors across Argentina!
Then, Carlos Anacandia got saved and began to preach and the rest is history as he and others have reached several millions for Jesus.
That is how the official persecution stopped and how the REVIVAL started in Argentina in May, 1978. Praise the Lord!
Posted by Max Solbrekken at 1:58 PM