The Body of Christ suffers while sex-crazed, barbarian criminals kidnap, rape Christian women, forcing them into cruel, demonic Islamic slavery! How the heart of God must weep for them. Pray Christians pray and weep for them! - Pastor Max Solbrekken 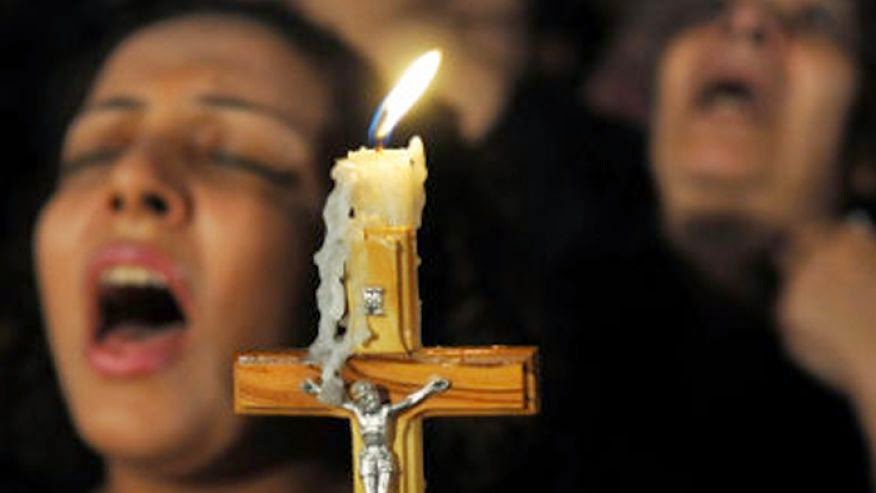 Egypt's Coptic Christian women and girls are being systematically targeted by Muslim kidnappers, according to a human rights group. (Reuters)
Fifteen-year-old Amira Hafez Wahim slipped out of the Christian church in Luxor, Egypt, where she had attended services with her mother in February, promising to dash to a nearby store and return quickly.
Five months later, she has not been seen since, although her parents immediately suspected a 28-year-old Muslim man named Yasser Mahmoud, who had tried to kidnap her before, had succeeded this time.  When her father went to the Civil Status Authority for a copy of her birth certificate, his fears were confirmed: Her name had been changed and she was now listed as Muslim.
Amira is one of approximately 550 Coptic Christian girls and women who have disappeared in Egypt over the last three years, according to a report from the Egyptian Association of Victims of Abduction and Enforced Disappearances.
Ebnar Louis, the Cairo activist who founded the association in 2010, said police are typically indifferent to reports of missing girls.
“We file an official police report, but it is often ignored,” Louis told the humanitarian think tank Atlantic Council.
The reasons behind this alleged police indifference are unclear. It could be individual sectarian bias, inadequate resources and funding, or plain incompetence.
The report concluded that many of the missing females were abducted by Salafi Muslims and forced to convert to Islam and marry their captors once estranged from their families. It found the abductions increased after secular strongman Hosni Mubarak was overthrown in 2011 and replaced by Muslim Brotherhood-aligned Mohammed Morsi. Although Morsi was in turn ousted by the military nearly a year ago, the abductions have continued.
Of the 550 missing females AVAED has investigated, only 10 have returned home and offered testimony. But the 10 who made it back tell a familiar tale that Louis’ group believes reveals an organized effort by Salafi extremists to kidnap, marry and convert Coptic women and girls.
The American Center for Law and Justice, which has called on the Obama administration to speak out for religious freedom in the Middle East and Africa, believes there is an ominous goal behind the abductions.
“The kidnappings are increasing, and many in the Coptic community believe that it is an attempt to systematically reduce the population of the Coptic community,” said ACLJ Executive Director Jordan Sekulow.
Sekulow noted that the 550 figure far exceeds the approximately 300 Nigerian school girls recently kidnapped and forced to convert by Muslim terrorist group Boko Haram. That case drew international condemnation, but the lower-profile, drawn-out wave of abductions in Egypt has gone largely under the radar.
“The international community must stand boldly to let the Egyptian authorities know that this is a matter of grave concern," Sekulow said.
Women who escaped their captors told Louis’ group that Salafi Muslim men threatened them, moved them through a network of safe houses and forced them into conversion and arranged marriage. Once they had converted, they said, they were threatened that fleeing as an Islam apostate is punishable by death.
Coptic advocates acknowledge that many of the women and girls initially go willingly with their captors, after being romantically wooed. But once they are away from their families, they soon find they have no options.
“Not all examples are forced,” said Louis. “Some begin as love affairs but then spiral into warnings. ‘What will your family do to you if you go home? Convert to Islam so we can be together.’ But afterwards she is told if you go back you will be killed as an apostate.”
George Nushi, the chief field researcher for AVAED, reports that of the 550 cases investigated, said as few as five percent of the abductions are violent kidnappings.  But preying on women under the guise of romance brings the same result, he said, claiming that most these relationships are formed with ill-intentions on the part of the man.
Zaid Fahmy, a professor of Near Eastern Studies at Cornell University, called the report a “fabrication” and said Egypt’s real problem with abductions involves holding hostages for ransom.
“Since 2011, there has been a collapse of law and order in Egypt and crime rates have dramatically increased,” Fahmy said. “Kidnappings for monetary ransom have been taking place. Most of the victims, however, are wealthy adult males and religious conversion of any kind is not the object of these criminal acts.
”
Posted by Max Solbrekken at 10:19 AM