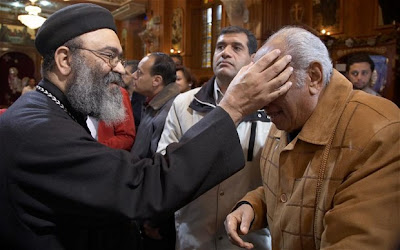 The most common threat to Christians abroad is militant Islam
Photo: ALAMY
By Edward Malnick 7:20AM GMT 23 Dec 2012
The study warns that Christians suffer greater hostility across the world than any other religious group.
And it claims politicians have been “blind” to the extent of violence faced by Christians in Africa, Asia and the Middle East.

The most common threat to Christians abroad is militant Islam, it says, claiming that oppression in Muslim countries is often ignored because of a fear that criticism will be seen as “racism”.

It warns that converts from Islam face being killed in Saudi Arabia, Mauritania and Iran and risk severe legal penalties in other countries across the Middle East.

The report, by the think tank Civitas, says: “It is generally accepted that many faith-based groups face discrimination or persecution to some degree.
Related Articles
·         Pakistan's only Christian minister shot dead
02 Mar 2011
·         Britain failing to stand up for Christians, say MPs
26 Feb 2012
·         Christians celebrate Christmas against the odds in China
25 Dec 2010
·         Christians now persecuted all over the world
29 Oct 2012
·         Christians in Bethlehem will celebrate midnight Mass on Christmas Eve, but dream of living elsewhere
23 Dec 2012
"A far less widely grasped fact is that Christians are targeted more than any other body of believers.”

It cites estimates that 200 million Christians, or 10 per cent of Christians worldwide, are “socially disadvantaged, harassed or actively oppressed for their beliefs.”

“Exposing and combating the problem ought in my view to be political priorities across large areas of the world. That this is not the case tells us much about a questionable hierarchy of victimhood,” says the author, Rupert Shortt, a journalist and visiting fellow of Blackfriars Hall, Oxford.

He adds: “The blind spot displayed by governments and other influential players is causing them to squander a broader opportunity. Religious freedom is the canary in the mine for human rights generally.”

The report, entitled Christianophobia, highlights a fear among oppressive regimes that Christianity is a “Western creed” which can be used to undermine them.

State hostility towards Christianity is particularly rife inChina, where more Christians are imprisoned than in any other country in the world, according to the report.

It quotes Ma Hucheng, an advisor to the Chinese government, who claimed in an article last year that the US has backed the growth of the Protestant Church in China as a vehicle for political dissidence.

“Western powers, with America at their head, deliberately export Christianity to China and carry out all kinds of illegal evangelistic activities,” he wrote in the China Social Sciences Press.
“Their basic aim is to use Christianity to change the character of the regime...in China and overturn it,” he added.

The “lion’s share” of persecution faced by Christians arises in countries where Islam is the dominant faith, the report says, quoting estimates that between a half and two-thirds of Christians in the Middle East have left the region or been killed in the past century.
“There is now a serious risk that Christianity will disappear from its biblical heartlands,” it claims.

The report shows that “Muslim-majority” states make up 12 of the 20 countries judged to be “unfree” on the grounds of religious tolerance by Freedom House, the human rights think tank.

It claims George Bush’s use of the word “crusade” after the September 11 attacks on New York created the impression for Muslims in the Middle East of a “Christian assault on the Muslim world”.

“But however the motivation for violence is measured, the early twenty-first century has seen a steady rise in the strife endured by Christians,” the report says.

The 2003 invasion of Iraq left Iraqi Christians “more vulnerable than ever”, highlighted by the 2006 beheading of a kidnapped Orthodox priest, Fr Boulos Iskander, and the kidnapping of 17 further priests and two bishops between 2006 and 2010.

“In most cases, those responsible declared that they wanted all Christians to be expelled from the country,” the report says.

Shortly after his death it emerged that Mr Bhatti had recorded a video in which he declared: “I am living for my community and for suffering people and I will die to defend their rights.
"I prefer to die for my principles and for the justice of my community rather than to compromise. I want to share that I believe in Jesus Christ, who has given his own life for us.”

The report also warns that Christians in India have faced years of violence from Hindu extremists. In 2010 scores of attacks on Christians and church property were carried out in Karnataka, a state in south west India.

And while many people are aware of the oppression faced in Burma by Aung San Suu Kyi and other pro-democracy activists, targeted abuse of Christians in the country has been given little exposure, the report says.

In some areas of Burma the government has clamped down on Christian protesters by restricting the building of new churches.

Islamic demons of hate, lust and murder have been
loosed to dishonour the women of Europe 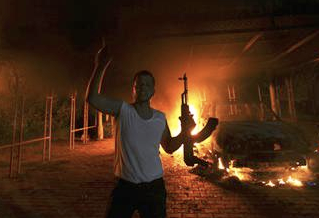 Benghazi Gate proves USA has been led by incompetent,
opportunistic, stupid lying politicians who are responsible for
deaths of brave Americans & demise of that great nation!
“Openly professing Christians employed
in government service find it virtually
impossible to get promotion,” it adds.
Christianity in the Middle East: Persecution Escalates
Written by Gary North on December 24, 2012
America’s wars in the Middle East have resulted in the widespread persecution of Christians in the region. When George W. Bush called America’s response to September 11 a crusade, this revived memories of medieval invasions.

Islamic nations are the main persecutors, but some regions in India have also joined in.

This strategy has limits in this era of digital communications. People can read literature that promotes controversial ideas of all kinds. Christianity historically is a text-based religion more than most. Attempts to suppress it will fail. But these attempts create terrible problems in the meantime for Christians whose churches have existed in the Middle East for many centuries.

A report published in the British Telegraph has been picked up by other sites. Sadly, the organization that prepared the report, Civitas, has no American website. A search for www.civitas.org does not connect with a server. The article did not identify the organization’s location or provide a link to the report, which is a major lapse in online reporting.
I tracked down the report. It is here. The site is www.civitas.org.uk. Here, we read this:
A glance at the position on several continents confirms the picture. In the large area between Morocco and Pakistan, for example, there is scarcely a country in which church life operates without restrictions. Syria has been one of the exceptions until now. As I write, however, the country is enduring full-scale civil war, and tens of thousands of Christians have been ousted from places including Homs and Qusayr.

The prognosis for the rest of the Middle East is hardly encouraging: there is now a serious risk that Christianity will disappear from its biblical heartlands. Anthony O’Mahony of Heythrop College, London, echoes other scholars in estimating that between a half and two-thirds of Christians in the region have left or been killed over the past century.

Comparable tragedies have unfolded elsewhere.
The report’s author, Rupert Shortt, has written a book on this: Christianophobia. It has received some reviews. On Amazon, it is listed, but there is not one word on it. I have never seen an Amazon book in print with less information. The publisher is asleep at the wheel.