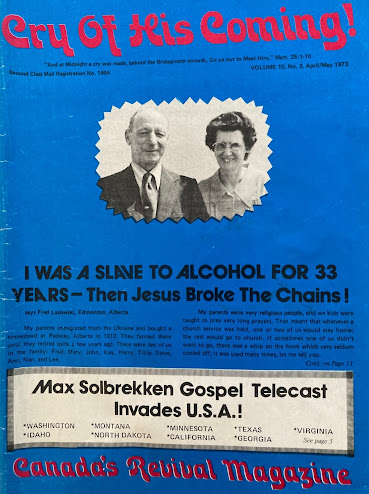 A SLAVE TO ALCOHOL FOR 33 YEARS

My parents immigrated from the Ukraine and bought a homestead at Radway, Alberta in 1912.  They farmed there until they retired quite a few years ago.  There were 10 of us in the family, Fred, Mary, John, Kay, Harry, Tillie, Steve, Ann, Nan and Lee.

My parents were very religious people, and we kids were taught to pray very long prayers.  That meant that whenever a church service was held, one or two of us would stay home; the rest would go to church.  If sometimes one of us didn’t want to go, there was a whip on the hook which very seldom cooled off; it was used many times, let me tell you.

Being the oldest, it was, “Fred do this, do that do this.”  It was 3 miles to school.  At first, we walked, then Dad bought us a horse and cutter.  It still wasn’t a picnic when it hit 40 degrees below zero.  Our school was so cold that our bread and syrup would freeze so hard that it was impossible to bite into it.

As we got a little older, there were chores to do: 16 cows to milk, 12 horses to feed and water.  The horses had to be combed and the barn cleaned out.  In spring and summer, we had to harness the horses and be out on the field working the land by 7 o’clock, then in the fall, cutting grain, stooking and threshing.  After that, we hauled and split wood.  Work, work, all the time!

As we got older, I pleaded with Dad to buy a threshing machine, which he did.  I was only 15 years old.  Dad hired an engineer and in one month I learned to operate a tractor to line up to a machine, and Dad learned to be a separator man.  In later years, he turned out to be the best separator man in the country.  Then I learned how to put belts on and set a machine.  For years I operated the whole outfit.  Those were the days I loved best in my life; sometimes threshing for 60 days, because there was a shortage of machines and the poor farmers had to wait their turn.

A year later my Dad bought a new car.  I now thought I had the world by the tail.  Things started looking good for me:  girls, moonshine, dances, it was good times all the way.  Then I got a little smarter.  The family would want to go to church, or to a wedding party.  I’d take them around and start a little drinking on the side.

Things were getting worse and worse with my drinking.  Then I started dating Lena, my future wife.  We fell in love and got married.  Dad bought me a quarter section of land and we moved into our own place.  I left the church altogether; I would only go at Easter time.  We were Greek Catholic.  After that, I started going into the bars and buying liquor and went from bad to worse.  In the meantime, we had 2 children, a girl and a boy.  The booze drinking kept getting worse.

One year, the crops were excellent.  We had a sports day at our hometown and “I tied one on.”  A big storm came along and hailed out my whole crop.  Nothing was left, no insurance, it was a total loss!

I BECAME AN ATHEIST!

I became an Atheist, an unbeliever, a God hater.  I swore there was no God, and left the church completely.  My dad begged, pleaded and cried, “Son, what has happened to you?  I tried to be good to you.  I bought you land and machinery, and built you a house to live in and you are destroying everything,” he said.  “Alright, alright, I will quit,” I told him.  Also, my wife pleaded and begged, and quarreled and threatened to leave.  It didn’t fizz on me for more than a day, I just kept going drinking and drinking.

I got drunk one day in a neighbor town.  As I was driving home, the police stopped me on the road because one of my lights wasn’t working.  They made me get out of the truck, looked me over, put my truck in the ditch and hurried me to the good old breathalyzer 60 miles away, and then locked me up overnight.

In the morning I bailed myself out, and was charged with drunken driving.  I went to court and got 30 days at Fort Saskatchewan jail, money was not good enough.  I saved myself $300.00 and got out of jail in 21 days for good behavior.

While in jail, they gave me a job sprinkling flowers and pulling weeds out of the flowers.  Knowing that I wouldn’t run away, the guard let me roam around the flowers all by myself.  One of my friends came to visit me.  “Say Fred, what do you do for refreshments over here, he asked.”  I said to him, “I am very dry.”  He said that he had two Mickey’s of booze in his car.  I told him to bring it where I was weeding the flowers and I hid it there.  That patch of flowers was looked after to a capital T.  When I finished the weeds and the bottles of booze, it was time to leave.  I took the bus to Edmonton and when I got off, I hit the first bar and “tied one on.”

The kids grew up – our girl got married, our boy went away and we were left alone.  I farmed for another few years; the machinery got old and we couldn’t buy new, so we leased the land.  We had enough money for the down payment on a house and moved to Edmonton (by God’s grace, 3 blocks from the Edmonton Revival Centre.  I will come back to this later)

I found a job, and my wife also started to work.  Things looked quite bright.  Somehow, even though I was drinking, I held on to my job.  On Saturdays, I would get drunk in the bar and would buy enough liquor to last me until Monday morning.  Quarrels would follow and my wife would threaten to leave, but I guess in her heart she must have known that something was going to happen soon.

I WAS GOING BLIND AND VERY SICK!

Either I would die, or kill myself, or kill somebody.  I was going blind and was very sick.  Lena took me to an institution but they didn’t want me there.  They wanted me to be dried out first, so she took to Alcoholics Anonymous.  That wasn’t for me!  I just quit my job and drank for another few months.

I continued to drink but knew in my heart that something was on the way, but I did not know what it was.   One Wednesday night I got very drunk and somehow got to the liquor store and picked up a bottle of vodka.  I took a good drink and got my directions turned around.  Instead of going home, I ended up going in a different direction.  As I was going, I walked by the Edmonton Revival Centre.  I heard them singing “Jesus died for me on the cross.”  I stopped by the door and listened for awhile, and then I started to sob so hard that tears blinded my eyes completely, although I was half -blind already.

I thought to myself, “Shall I go in or shall I ask somebody where my address is.”  I opened the door and peeked in.  I had never been there and was scared I would be thrown out.  I sneaked in and sat at the very back until the end of the service and was the first one to get out.  I didn’t want to meet the preacher.  I got my directions straightened out and was only 3 blocks from home.  Think of it, I had a church practically in my own yard!  Then things began to happen fast.

The next Sunday, still hazy from Saturday, I told my wife I was going to church.  “Drunk?” she said.  “You smell like a brewery and you are going to church?”  “Yes, to church”, I replied.  I came there at the right time.  I liked it so much that I stayed through the service and I wanted to know who is who.

I found the lady who collects the donations; I wrote my first cheque to church in over 35 years.  Things started to move.  I got a “little braver”; I wasn’t afraid of Max Solbrekken.  I asked in a nice way if he could come to my house after the service and pray for me, my home, and my wife.  He answered, “I will go.”

I was still charged up that time and had half a bottle of rye hidden in my basement.  We arrived at my place and I woke up my wife.  She got up and prepared us some coffee.  After that, Pastor Solbrekken said, “Give me the bottle of whiskey that you have.”  I mumbled some excuses and didn’t give it to him, thinking I would need an eye opener in the morning.  Brother Max put his hand on my head and prayed in Jesus’ name and cast the devil out of me.

In the morning I got up with a funny feeling.  I was breathing differently and I had no craving for liquor.  It is now 18 months later, and I have never touched a drink since and I feel just fine.  I went to church every time I could, paid my tithes, took water baptism, was anointed with oil, took Holy Communion and became a full-fledged Christian.

I want to share with you a couple of close shaves I had with death.  If it hadn’t been for an angel of God, I wouldn’t be writing this testimony.

When I was 16 years old, I was breaking land with a big tractor; sometimes I worked day and night.  One day I was breaking and my brother John brought my lunch to the field.  I had lunch.  As my brother was there, I asked him to make a round and showed him how so that I could have a rest in the tall grass.

I laid myself down in the grass and fell asleep.  A little while later he was shaking me and I woke up.  He saw just a part of my shoe and stopped the tractor a foot away from me. We both really got scared.  That was a miracle from God!

As I am coming to the end of my testimony, I want to tell you that drinking is a curse of the devil, a curse that pushes you to drink more and more.  I know because I got so high one time, that I thought snakes were crawling on my body by the hundreds.  You get delirious and you get cold sweats all over your body.  At one time I thought there was no point in living and spent so much money on booze trying to kill myself, but I was afraid to die.  I didn’t want to shame my wife and all my family.  Praise the Lord!  He spared me.

Listen to me my friend. If you have the same problem, believe me, give yourself to God.  Come to the Edmonton Revival Centre.  Let Max Solbrekken pray for you in Jesus’ name, and you will see the difference. If you don’t know to get there or are ashamed to face the church and the people, please don’t be, because I made it.  Jesus Christ will forgive your sins and save you. Hallelujah.

ATTENTION: This is one of the greatest miracles of Christ delivering alcoholics, that I have witnessed. Although this happened in 1971, Jesus Christ is the same yesterday, today and forever! He is still calling for sinners today in 2022. Please write me or email me and we will get back to you! -